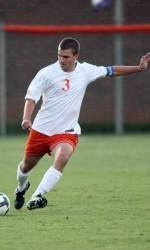 The Weaver-James-Corrigan and Jim and Pat Thacker scholarships are awarded to selected student-athletes–three from each league institution–who intend to pursue a graduate degree following completion of their undergraduate requirements. Each recipient will receive $5,000 to contribute to their graduate education. Each recipient has performed with distinction in both the classroom and his/her respective sports, while demonstrating exemplary conduct in the community.

In addition to those receiving scholarship funds, four student-athletes will receive the Weaver-James-Corrigan Honorary Award. Three golfers — Clemson’s Ben Martin, Virginia’s Whitney Neuhauser, and Wake Forest’s Brendan Gielow — and Duke lacrosse standout Max Quinzani will be recognized for their outstanding academic and athletic performance and intend to compete at the professional level.

The 40 student-athletes will be honored on April 14th, 2010 at the Koury Convention Center in Greensboro, NC at a luncheon hosted by the Nat Greene Kiwanis Club.

Michelle Nance; Clemson; Language & International Trade; Rowing; Simpsonville, SC Michelle Nance has guided the Clemson rowing squad to appearances in each of last two NCAA championships, and helped the Tigers to be recognized as the 2009 ACC Crew of the Year. Also a member of the US Under-23 national team, Nance was last season’s ACC Rowing Scholar-Athlete of the Year and is also a two-time member of the ACC All-Academic Rowing Team. She is scheduled to graduate in December 2010 with an undergraduate degree in language and international trade. The Simpsonville, SC, native has served as both vice-president and president of the Language and International Trade Society at Clemson and is on the Dean’s Council of the Students’ Advisory Committee. Nance plans to begin her graduate program in international business in Fall 2012.

Katrina Obas; Clemson; Health Science; Women’s Swimming & Diving; Kanata, Ontario, Canada Katrina Obas holds a pair of Clemson school records and was a part of two record-setting relay teams during her time as a Tiger. A leader in various capacities, Obas served as team captain this season, is a member of Clemson’s International Student Advisory Board, as well as a past recipient of the Gantt Intercultural Achievement Award. The Kanata, Ontario, Canada, native is a kinesiology major and three-time selection to the ACC All-Academic Women’s Swimming & Diving Team. Obas plans to pursue a post-graduate degree in the medical field at the Medical University of South Carolina.

About the AwardsThe Weaver-James-Corrigan Award is named in honor of the late Jim Weaver and Bob James, as well as Gene Corrigan, all of whom are former ACC commissioners. The league’s first commissioner, James H. Weaver, served the conference from 1954-70 after a stint as the Director of Athletes at Wake Forest University. His early leadership and uncompromising integrity are largely responsible for the excellent reputation enjoyed by the ACC today.

Robert C. James, a former University of Maryland football player, was named commissioner in 1971 and served in that capacity for 16 years. During his tenure, the league continued to grow in stature and became recognized as a national leader in athletes and academics, winning 23 national championships and maintaining standards of excellence in the classroom.

Prior to 1994, the Weaver-James post-graduate scholarships were given as separate honors. The Jim Weaver Award, which originated in 1970, recognized exceptional achievement on the playing field and in the classroom, while the Bob James Award, established in 1987, also honored outstanding student-athletes.

The Thacker Award, which originated in 2005, is awarded in honor of the late Jim and Pat Thacker of Charlotte, N.C. Jim Thacker was the primary play-by-play announcer for the ACC’s first television network. Recipients of the award must demonstrate outstanding performance both in athletic competition and in the classroom and intend to further their education through post-graduate studies at an ACC institution.