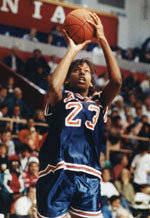 Included in the class are 12 former student-athletes that represent four decades of ACC Women’s Basketball competitors. Below is a complete list of this year’s legends and the accolades from their playing career.

For information and tickets to this year’s ACC Women’s Basketball Legend’s Luncheon, please call 1.336.854.8787 extension 236 or go to TheACC.com.

All-time leading scorer in BC women’s basketball history…Set record after record with the Eagles, grabbing 2,523 points, 682 rebounds and 250 assists…Holds BC records of field goals made (867), field goals attempted (1,859), free throws made (683)…Still holds the record for most points scored in a game (39); most field goals attempted in a game (30), most free throws made in a game (17) and is tied with three BC alums for most field goals made in a single game (14)…Was inducted into Boston College Hall of Fame and the standout’s retired jersey hangs in Conte Forum today.

Four-year starter for Clemson, including the 1990-91 team that reached the Elite Eight, Clemson’s best NCAA finish in history…In that season, the Tigers finished eighth in the final USA Today poll, the highest national ranking ever by Clemson…Earned Academic Honor Roll accolades (1991-93)…As a senior, averaged 18.7 points per game and was named second-team All-American by the American Women’s Sports Federation…Is still third in CU history in career scoring (1631), rebounding (874), career field goals (661) and free throws made (309)…Named the South Carolina Female Amateur Athlete of the Year in 1993…Inducted into the Clemson Athletic Hall of Fame in 2006.

Four-year letterwinner for the Blue Devils…One of only four players to average double figure points in each of her four years…Led Duke in scoring as a junior with 19.5 ppg and as a senior with 17.5 ppg…Ranks fourth all-time at Duke with 1,785 career points…Her 149 career blocks ranks second all-time at Duke and 16th in the ACC…In the top five of 17 different Duke single-game, -season and -career records…Inducted into the Duke Hall of Fame and Staten Island Sports Hall of Fame in 2002…Had her No. 23 Moore Catholic High School (Staten Island, NY) jersey retired in 2004…Serves as a member of both the Duke University Athletic Department’s Advisory Board and Women’s Scholarship Committee.

Lettered and started for the Seminoles from 1996 to 2000…Two-time All-ACC second team selection…Named to the ACC All-Freshman Team in 1996…Scored 31 points, a mark that at the time tied for fifth best in single game points in ACC Tournament history…Her 15 field goals in the Maryland win tied an ACC Tournament record…Finished her career ranking fifth in points (1,428, now sixth), fifth in scoring average (15.7 ppg) and 10th in rebounds (603, now 11th).

Sits atop the Tech record books in career field-goal percentage (59.3%) and blocked shots (245)…Also stands as Georgia Tech’s scoring average leader (18.9 ppg)…The six-foot-seven Marlboro, N.Y. native is the tallest woman to ever wear a Yellow Jacket jersey…Ranks third in school history with 1,723 points, second in rebounds (978) and second in field goals made (730)…Became the first Yellow Jackets’ women’s basketball player to be named ACC Player of the Week on Jan. 5, 1986…Inducted into the Georgia Tech Hall of Fame in 1994.

All-time leading scorer (1,928) and all-time leading rebounder (968) for the Terps…One of 22 players to score over 1,000 career points…Named a Kodak All-American after leading Maryland to an ACC title and the NCAA Final Four with a final record of 29-3 in 1989…Member of the 1987 ACC Championship team that also advanced to the NCAA Elite Eight…Most Valuable Player of the 1989 ACC Tourney…Named to the NCAA Tournament All-Mideast Region team (1988) and All-West Region squad (1989)…1989 ACC Player of the Year…Holds the school record for most points in a season (686)…In 2003, was named to the ACC Women’s Basketball 50th Anniversary Team.

Four-year letterwinner helped the Canes to several firsts – including their first appearances in the NCAA Tournament (1989) and the Women’s National Invitation Tournament (1990)…Set Miami’s single-season assists record (221) as a senior, earning recognition as the BIG EAST’s 1991-92 assists champion…Is the program’s fourth all-time leading scorer with 1,766 points and ranks second in career assists (694) and career starts (119)…Named a member of Miami’s Hall of Fame in 2003.

One of only 15 players in UNC history to notch over 1,500 career points…Was inducted into the prestigious Order of the Valkyries, one of the most respected North Carolina honor societies…Ended her career in the top five of several statistical categories and is currently the school’s leading rebounder (1,251) for both men’s and women’s basketball…Was hired at Georgia Tech in 1981 as the first full-time female to coach any Yellow Jackets’ women’s sports team…In 1995, UNC selected her as an Honored Jersey recipient where her playing jersey hangs in the rafters of Carmichael Auditorium…In 2000, was recognized as the WBCA National Administrator of the Year…Named to the ACC Women’s Basketball 50th Anniversary Team in 2003…Was inducted into the 1995 South Jersey Women’s Basketball Hall of Fame, the 2000 Georgia Tech Athletic Association Hall of Fame, and, most recently, the 2006 Camden County Sports Hall of Fame.

An All-American at NC State, whose jersey was retired in February 2000…Was the only Wolfpack player to be named All-ACC first team for four consecutive years…Ranks fifth on the all-time NC State scoring chart (1,957) and second in career rebounds (1,051)…Her 237 career steals ranks fifth in the NC State recordbooks…Was part of the 1980 Wolfpack squad to bring home the program’s first ACC Championship…In 2003, was named to the ACC Women’s Basketball 50th Anniversary Team…Named head coach of the WNBA’s Charlotte Sting in 2003, when she lead the squad to the Eastern Conference Playoffs…Also served as the General Manager and an assistant coach of the Sting…Is the founding President of LifeCoachDesigns, LLC, a sports & executive coaching company…Has been an analyst for ESPN, FoxSportNet and C- Set.

A first-team Academic All-American, two-time district Academic All-American and Rhodes Scholarship finalist…Helped the Cavaliers to three consecutive Final Four appearances…Won the Frances Pomeroy Naismith Award in 1993 as the top player in the nation under 5-7…Ended her collegiate career ranked 18th in career scoring (1,138) and third in assists (528)…Holds the school record for assists in a game with 14 (vs. Maryland, 2-23-93)…Named to the 1993 NCAA East Regional All-Tournament Team…In 2003, was named to the ACC Women’s Basketball 50th Anniversary Team.

Set three school records during a 29-point performance against Florida State in 1981, which included 15-of-17 shooting from the free throw line…Despite shin splints her sophomore season, Lee started all but one game, helping the Hokies to back-to-back winning seasons for the first time in the program’s history…Became the program’s first player to register 1,000 points in a career, finishing with 1,147 career points, which still ranks her 10th all-time at Tech, 20 years later…Was inducted into the Virginia Tech Sports Hall of Fame in 2005.

Won the Frances Pomeroy Naismith Award in 1994 as the top senior in the nation at 5-8 and under…Second team All-ACC in 1992 and 1994…Named to the ACC All-Tournament second team in 1994…Third all-time in program history with 1,663 career points…Led Demon Deacons in assists and free throw percentage all four years and in steals three times…Holds single-season records for three-point percentage and free throws made…Was inducted into the 2002 inaugural ceremony of the New England Basketball Hall of Fame…Played professionally in Germany in 1995 and joined the WNBA during the inaugural season, playing for the Charlotte Sting.