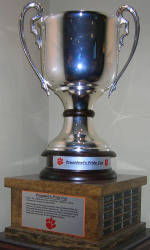 About the President’s Pride Cup…

The President’s Pride Cup is the highest honor an athletic team can receive at Clemson. It is awarded to the team that demonstrates the greatest achievement in athletics, academics, leadership and community service. The award originated with Sarah Cefalu, a swimmer who attended the NCAA Leadership Conference and brought the idea to the attention of SAAC. Jay Crout, also a swimmer who was an assistant in the Office of Community Relations, devised the point system that is used today. The Cup honors excellence in all areas of the student-athlete experience. The Cup is on display at Vickery Hall in a special case along with memorabilia from the winning team.

In only its fourth year as an athletic department honor, the 2009-2010 President’s Pride Cup was awarded to the Clemson Women’s Indoor Track & Field and Cross Country team. Averaging nine hours per student-athlete in community service, the team set a new standard by earning a total of 108 points in the four categories of excellence. Highlighting their year was an ACC Indoor Championship and a seventh place finish at the NCAA’s. In the leadership category, Stephanie Buffo was named the ACC Sportsmanship award winner and Brianna Rollins was named the ACC Freshman of the Year. Kim Ruck broke the 5K school record with her All-American performance at the National Championships. In the academics category, the team had over 20 women with a 3.0 GPA who were also named to the ACC Honor Roll.