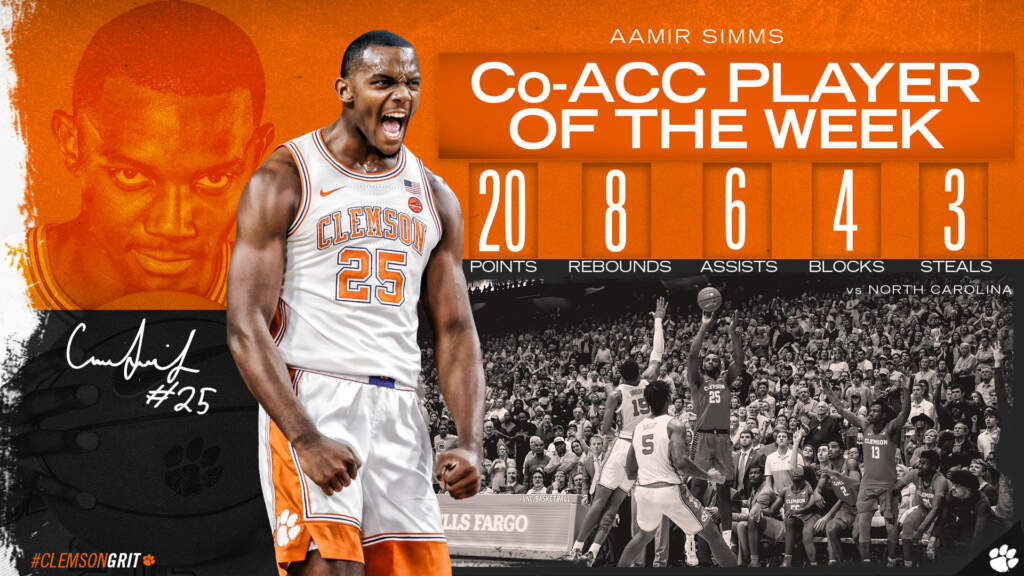 GREENSBORO, N.C. – Junior forward Aamir Simms was named Co-ACC Player of the Week, as voted on by a panel of media members, for his performance in Clemson University men’s basketball’s historic victory over North Carolina in Chapel Hill on Saturday, 79-76 in overtime.

Simms posted a “Quintuple Leadership” against the Tar Heels, leading the Tigers in points (20), rebounds (8), assists (6), blocks (4) and steals (3) en route to the Tigers’ first-ever victory in Chapel Hill.

The Palmyra, Va. native scored the last 10 points of regulation and score or assisted on six-of-nine points in the overtime period to help Clemson prevail. Simms knocked down a 3-pointer with 3.5 second remaining to send the game into the extra period.

It marked Simms’ fifth career 20-point performance and his 12th double-digit scoring game of the season. His four blocked shots tied a career-best.

Clemson hosts Duke on Tuesday, Jan. 14 at 7 p.m. The game will air on ESPN. Tickets are available by visiting ClemsonTigers.com.