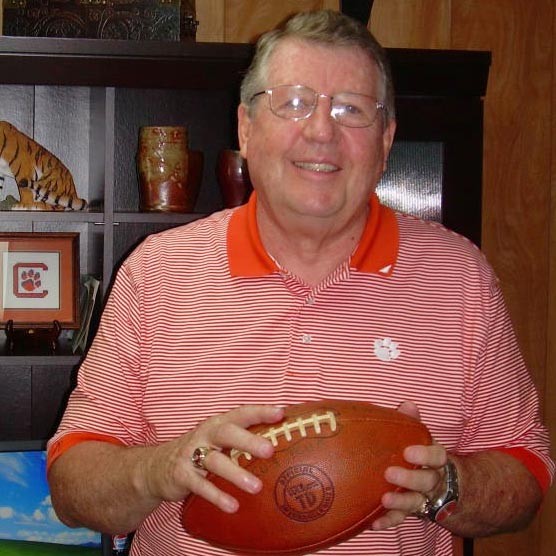 (Editor’s Note-It’s with great sadness that we learned of Bruce McClure’s passing on Sunday August 23. For many, he was a great businessman, teammate and friend.)

This fall, it will be 50 years since Bruce McClure and his teammates faced TCU.

The Horned Frogs came to Tigertown very highly touted in 1965, and it was going to take a great Clemson performance to knock off TCU in this particular meeting. For Clemson lineman Bruce McClure, it was the most memorable game of his life.

It wasn’t the hype of the football game that McClure remembers, nor was it the fact that a member of the old Southwest Conference was coming to town for the first time. Instead, it was the events surrounding this late October weekend that forced him to make the hardest decision in his young life.

McClure, a native of Charlotte, N.C., came to Clemson from Myers Park High School. Coach Whitey Jordan recruited him in high school. Clemson found out about McClure from Hap Carr, also a Myers Park graduate and football player and baseball manager at Clemson. He told the Clemson coaches about McClure, and the staff was very much impressed.

“Coach Jordan gave me a scholarship in the fall of 1961, and when I started I was on the 12th team. I worked my way up and I ended up on the first unit on the freshman team, “ said McClure, who was the owner of Seven Products Plus, a Contractors Supply company in Anderson, S.C.

McClure was in his fifth year at Clemson in 1965, having redshirted the 1962 season due to a knee injury. McClure said that on the Friday morning before the TCU game, he got a message in his dorm that Head Coach Frank Howard wanted to see him, and fast. McClure said he was wondering why in the world Howard wanted to see him, and the thought entered his mind “I wonder what I have done?”

“I went as fast as I could to his office in Fike Field House. His secretary announced that I was there. He told me to come in and I sat down. He simply said, ‘Boy your Momma is dead.’ I was shocked. I knew she had been sick with leukemia, but I thought there was more time. She had been coming to the games. At that time, they were coming out with new innovations in treatment and we were very encouraged. But during surgery, she had a brain hemorrhage and died.

“I was numb, I didn’t know what to say. Coach Howard went on to say, ‘We need you to play tomorrow, but we also understand if you don’t. But we need you.’

“By the time I left his office, I knew I would play in the game. I told him I would play, but I was going to Charlotte that night and spend time with my family.

“I was shocked and hurt and other thoughts were going through my mind. I was the oldest brother; I had to take care of my family. I had to go and tell my brother, who at that time was a freshman at Clemson. I ran into Dean Cox, and he was a big help to me. I knew I had to get home. I drove up to Charlotte with my brother, and it was the longest drive I have ever made in my life. I drove back to Clemson with a family friend early Saturday morning and we got back to campus around 2 a.m., and I went to my dorm room. I didn’t sleep but maybe two hours.

“I kept thinking, I just talked to Mom, and she had said go back to school on a previous visit. I wanted to stay home and make sure she was all right just days before.

“She told me whether she lived or died, that I had my own life to live. You will get in trouble if you stay at Charlotte and you’ll get behind on your studies. One thought that kept going through my mind was that she told me to fulfill my commitments under any circumstances. I loved my parents and they had made many sacrifices for the family. I was going to fulfill my commitment to Clemson and my teammates.

“I got up on gameday and met the team for the pregame meal. Coach Howard, Coach Don Wade and Coach Jordan all came and talked to me.

(Below is the 1965 Clemson-TCU game program cover drawn by Phil Neel).

“I went to the field house to get dressed for the game. I went in the dressing room and trainers Herman McGee and Fred Hoover were very helpful. I remember both of them talking to me. The rest of the team pretty much let me have my time to myself.”

In the press box, McClure’s name was not included on the depth chart for the TCU game, as Clemson’s longtime Sports Information Director Bob Bradley explained, “We didn’t put his name on the depth chart because we didn’t figure he would play given the circumstances.”

“I didn’t start, but I got in late in the first half,” McClure said. “I started thinking about football. At the half, Coach Howard asked if I was doing okay. He talked about my situation and me during the halftime talk. I played most of the second half. It was Homecoming and I had a sponsor — there was so much going through my mind. All that was so difficult, but I knew somehow everything would work out. Back in those days, you played both ways on offense and defense.

“I played really hard and we defeated TCU, 3-0.” he added. According to the Charlotte Observer, “McClure figured strongly in Clemson’s 3-0 victory over the Horned Frogs.”

During the final seconds of the game, Clemson was running out the clock. Quarterback Thomas Ray ran a sneak to kill the clock. When the mass of Texas Christian players climbed off him and the final seconds were counting down, he scrambled to his feet and dashed to the Tiger player dressed in uniform No. 68 on the field, Bruce McClure. Ray thrust the ball into McClure’s hands. It was the game ball. “Take this,” Ray said. “We won this one for you.“

McClure said after the game to the media, “It would have been Mom’s wish that I play. She wanted me to live up to my commitments. That’s the only thing that enabled me to do it. “

In the picture below are Bruce McClure (L) and Thomas Ray