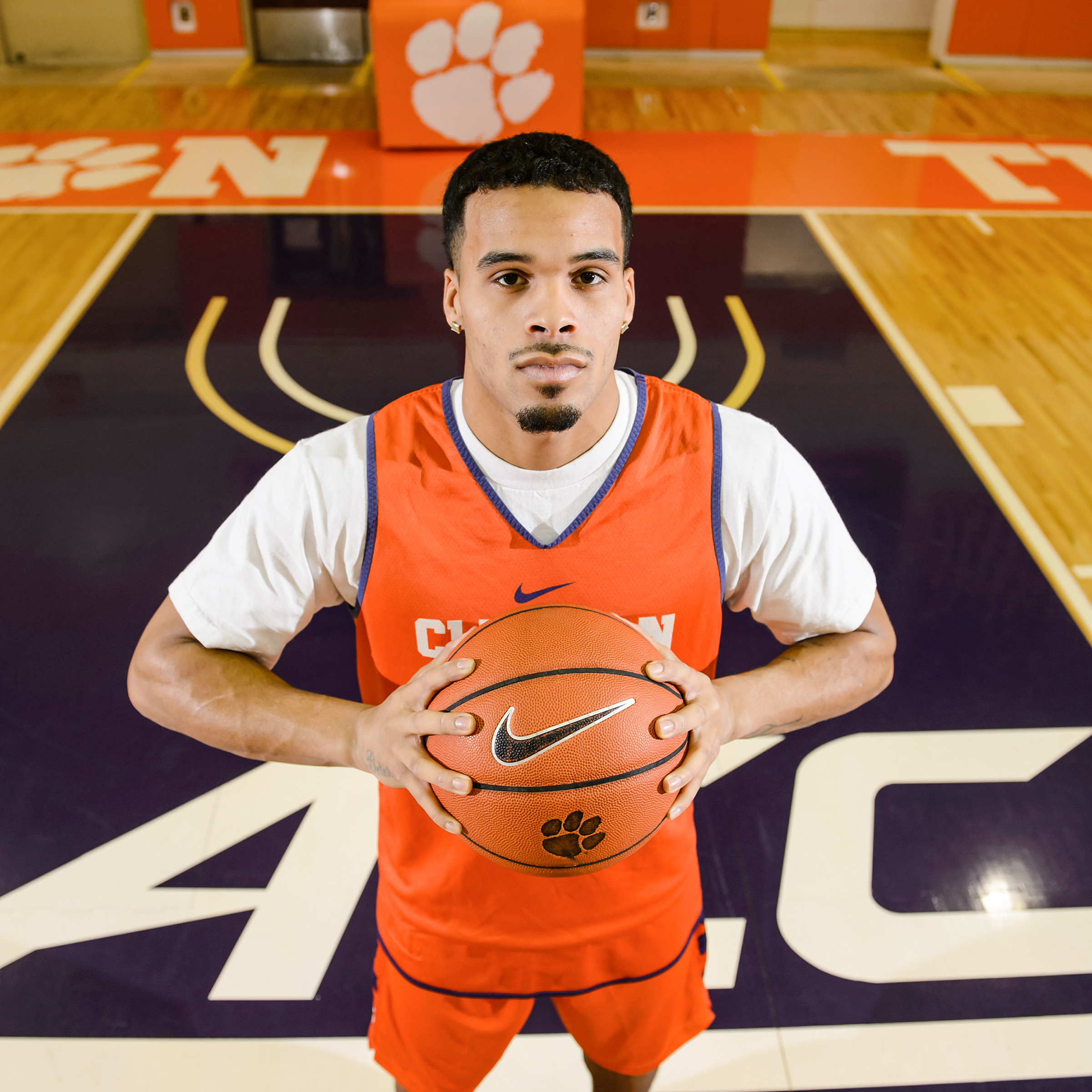 Avry Holmes had a sweatshirt. His sister had given him a mix of college apparel when he was in high school, but there was one sweatshirt he favored over the others.

“The crazy thing about it is that I had a Clemson sweatshirt in high school that my sister gave me and I used to wear it all the time, but I really didn’t even know what Clemson was. It’s strange how I ended up coming here.”

Originally committing to San Francisco, a Division I school in the West Coast Conference, Holmes had the desire to get more from himself and the game. He knew that in order to get what he needed to succeed, he had a tough decision to make.

“I knew that if I wanted to do great things, I would have to make sacrifices like leaving my family and traveling across the country to play.”

Holmes made the decision to transfer schools, but then he had another decision…where should he go?

“When I decided to transfer from San Francisco, I asked a lot of my peers who I trust if they knew anyone on the college basketball circuit,” he said.

“One of them knew the coaching staff at Clemson really well. He told me the coaches were really up front and had good character.”

One thing that appealed to Holmes was the focus that Clemson puts on building well-rounded men, not just athletes.

“My friend told me that the coaches care about more than just basketball and want to help build you into a man.

“When I saw how the coaches talked to me and how they acted and worked, I realized that it was a perfect fit for me.”

Besides a great coaching staff, Holmes couldn’t take his mind off the atmosphere he felt at Clemson.

“I didn’t want to be in a city. I wanted to be somewhere I could just focus on basketball.

“It is a great environment with great people. The sports are always at a high level. I love everything about Clemson.”

After sitting out a year due to NCAA regulations, Holmes made his Clemson debut earlier this season. He believes he can contribute many attributes to the team.

“I feel like I bring a lot of toughness and leadership. I can shoot the ball pretty well and I am pretty good at finding guys and making plays for my team.

“I am getting better at finishing at the rim as well.”

As good as he is on the court, what Holmes brings to the lockerroom is even more important to him.

“I try to bring character and build a team bond. It doesn’t matter to me if they are a walk-on or a starter playing 50 minutes a game, I still want them to feel comfortable coming and talking to me.

Moving from the WCC to the ACC has been a huge part of the journey that Holmes is on. Growing up, he did not watch much college ball on television, which makes every team he goes up against a learning experience.

“To be honest, I didn’t really follow college basketball or SportsCenter growing up. I was always outside playing ball and hanging out with my friends. That’s why I don’t get culture shock when we play big name schools. I didn’t follow their legacies growing up.

“All I knew was that the ACC teams were good. It is fun to see everyone’s reactions to who I am going up against, and it gives me a good feeling.”

Something Holmes noticed right away was the physicality of not only his newfound teammates, but also his opponents.

“The ACC has bigger and faster guys than my previous school. The West Coast Conference is a good conference, but the physicality in the ACC is what makes it different and faster.”

After a rocky start to the season, the Clemson basketball got off to a fast start in league play. The major difference that Holmes has noticed since the beginning of the season is communication.

“We had a couple of good conversations where we were real with each other and spoke our mind about certain things that had been bothering each of us.

“No one took it personally and we decided what we needed to work on, both individually and as a group. After that conversation, I believe we are a closer team.”

The team’s closeness has helped the players propel themselves through adverse situations and to come together as a unit instead of a group of individual players.

“We are learning how to fight and win at the end of games. We have really come together as a team and wanting to win for the team, not just for ourselves.”

A unique way that Holmes is able to motivate his teammates is through two tattoos that say “Believe” and “Achieve,” with one word on each hand.

“I have to believe in what I do to be able to achieve anything. Every time I put my hand up for a team break, I see those two words, and it is a constant reminder. The other guys are able to see it as well, and it helps motivate them to keep fighting.”

There is another tattoo on Holmes’ left bicep that is his personal motivator, not just in basketball, but in life.

“My bicep tattoo is of me and my dad, and it is my favorite tattoo. He passed away during my freshman year of high school. He was a really good basketball player.

“It hurts because he died before my basketball season even started, and I was able to start as a freshman on varsity, which was a really big moment for me. We were best friends, so losing him turned my whole life around.”

The loss of his father made Holmes examine his life and his attitude for the next phase of his life.

“My father’s passing helped me in a negative and positive way. Not having the man who was ‘Superman’ to you around anymore made me grow up really fast. I became more mature and more hungry to do it all for him.”

Though he lost his father at a young age, Holmes was able to cherish all the time he did have with him.

“I understood all of the things he taught me at a young age and tried to learn everything I could from him. My dad is basically the reason I am where I am today.”

The lessons he learned from his late father prepared him for every step of the journey he took to get to Tigertown. Holmes is thankful for each and every moment he had with his late father and for his time at Clemson.