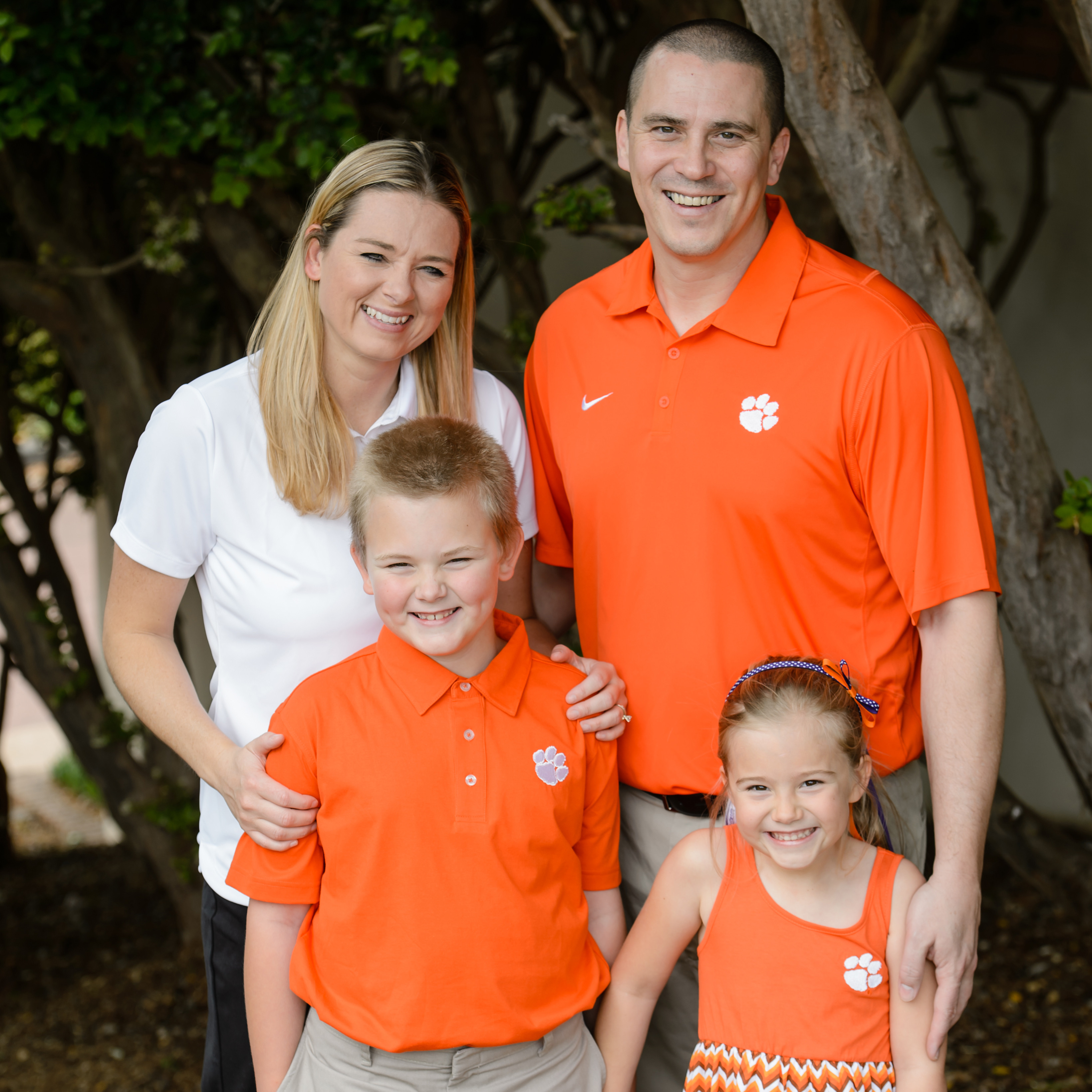 Note: The following appears in the May issue of Orange: The Experience, arriving in the mail for IPTAY members this week.

Family and volleyball have gone hand-in-hand for Hugh Hernesman for as long as he can remember. When asked about the “family feel” that has been part of his volleyball programs since his first coaching stint 20 years ago, Hernesman noted that it was less of a conscious coaching decision and more of a value that has always been ingrained in him and his wife Stephanie.

“It may have been at Hardin-Simmons (a Division III school in Abilene, Texas) where we first realized the satisfaction we got out of getting to know the players, seeing them as they progressed through their volleyball careers and beyond, and still maintaining those relationships even today.

“When we first arrived at HSU, we started having individual meetings with our players, simply to get to know the team. At the end of my third meeting with one player, who had a pretty tough family dynamic at home, she poked her head back in my office and said ‘You know, you’re kind of like a dad to me.’ It was then that it hit me; the impact I had wasn’t only as a coach, but also as something more. Steph and I like to say that we’re kind of like everyone’s favorite aunt and uncle.

“That instance helped us realize what our role was as coaches, and how much we could help shape our players’ lives. So that may be when it really sunk in with us, but I don’t think we know or even ever considered any other way. It’s just who we are as people and as coaches. Beyond that, with today’s athlete, I feel that’s where you get the most return. Players play hard for the program and for each other when they feel a connection to the coaching staff.”

Stephanie expanded on that sentiment.

“All too often, we hear that when kids go to college, playing their sport becomes a job, which is really sad. It’s important to us that our athletes walk away with a good experience. Playing in college is often their dream, and they put a lot of time and effort into it, so they should enjoy it. We are still in touch with and still friends with athletes that we coached at Whitewater, and that was 16 years ago. That’s what it’s about for us.

“Don’t get me wrong, we like to win, that’s what we have done in the past and it’s what we want to do here at Clemson. But those things go together. We want to build the kind of atmosphere where the athletes are not afraid of us and feel like they can approach us. It’s easier to create a winning culture when your players believe in you and trust you.”

Hugh, who was hired as the ninth head coach in Clemson volleyball history on March 5, and Stephanie, named an assistant coach for the Tigers two weeks later, have been married for 14 years, and have been coaching together for 17. They have been building and rebuilding volleyball teams into successful programs by implementing their family-first style at every stop.

Stephanie was a three-time AVCA All-American who helped lead the Warhawks to three conference championships and four NCAA Tournament appearances from 1995-98, including a berth in the Final Four in 1995. After graduating with a degree in finance in 1999, Stephanie began her collegiate coaching career at her alma mater as well, first as a volunteer assistant and then a graduate assistant. The Warhawks program was highly decorated during the Hernesmans’ tenure, capping off nine consecutive NCAA Tournaments, including six Elite Eights and four Final Fours, by winning the Division III National Championship in 2002.

The next stop was Hardin-Simmons, where Hugh served as the head coach and Stephanie as an assistant from 2004-07. They inherited a program with one winning season in the previous 15, and in 2006, just their third season, the program won its first-ever conference tournament title and played in the program’s first Division III NCAA Tournament.

After leaving Hardin-Simmons, the Hernesmans were at Ball State for three seasons (2007-09), with Hugh serving as the first assistant coach and recruiting coordinator and Stephanie as a volunteer assistant. The Cardinals made two appearances in the Mid-American Conference Tournament during that time, and after their departure, the players Hugh recruited were a significant factor in the program’s improvement, which included a MAC title in 2010 and an NCAA Tournament bid in 2011.

Most recently, the two spent five years as co-head coaches at Northwestern State in Natchitoches, La. The Demon program averaged 10 wins per season play prior to their arrival. In 2012 and 2013, their third and fourth years with the program, the team recorded back-to-back 20-win seasons. In 2013, the Hernesmans guided the Demons to the most overall wins (21), conference wins (15) and highest final RPI (98) in the program’s 32-year D-I history.

In 2014, NSU won the Southland Conference Tournament for the first time in school history, and went on to the NCAA Tournament before falling in a competitive match to Texas, the No. 2 seed overall. In addition to success on the court, Northwestern State team also experienced success in the classroom, earning the AVCA Team Academic Award three straight years from 2011-13.

Two months ago, the Hernesmans accepted the job and moved their family, son Austin (8) and daughter Emma (6), to join the Clemson Family. When asked about the Clemson Family, and how their coaching style would fit, Hugh could not hide his excitement.

“Our style is a perfect match for Clemson,” he said. “In the research we did as we were going through the interview process, we read a lot and heard a lot about the Clemson Family. When we came to campus for the first time, we could just feel it. It was something we had at NSU too, and something that we really liked. Since moving here, that realization has only become stronger and every day we’re here, we recognize even more what a great match it is.”

“We felt it immediately,” she said. “We got here on a Wednesday and someone on the staff heard that Austin plays baseball. They put us in touch with the right person, Austin had a tryout on Friday, and now he’s on a baseball team! People want you to be involved. Everybody — coaches, administrators and support staff — works really hard to have something great here and to make it such a special place, and it’s important to enjoy it and build relationships along the way.”

Clemson’s family atmosphere and the way the school and athletic department cares for its students, as well as the volleyball program’s storied success, has the Hernesmans excited about the future.

“This program has been very strong in the past, and even in the recent past,” Hugh said. “Clemson is a great school. For our sport specifically, there are a lot of high-achieving kids academically, so when you have a top-20 public institution, that’s a big draw. The campus sells itself and the people here sell themselves, which allows you to recruit a really high-quality athlete. The Clemson brand is nationwide, the athletic programs are great and everyone recognizes the name. We take such good care of our athletes, in terms of student-athlete welfare, athletic training, academics, etc. Everything is so set up for success that it’s an easy sell.

“It will be a process and we’ll have a very young team this fall, but the potential is here. Down the road, I don’t see why this can’t be a team that is consistently finishing in the top third of the ACC and regularly going to the NCAA Tournament.”

“I just don’t know how people say no to this place,” she said. “It’s a great education, it’s a great place. It’s not too big of a town. It’s not too small of a town. It’s something special. I think we can do great things. It’s going to take a while to build our culture and to implement our unique training style, but there’s no reason why we can’t be great in the years to come.”