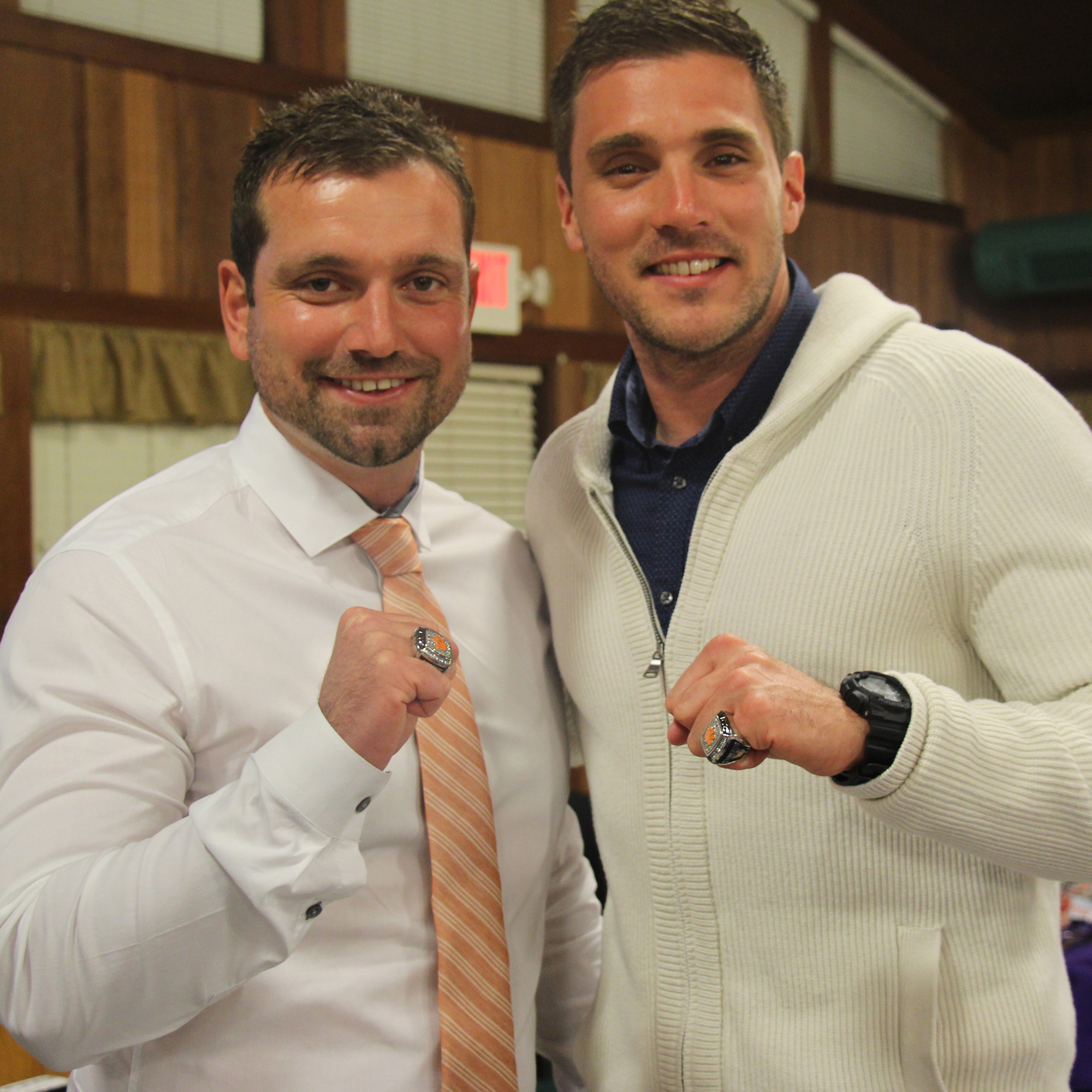 A Conversation With the Assistants – Men’s Soccer

Q: What is your fondest memory of playing soccer growing up?

Jones: When I was 15, I was lucky enough to go through a host of selection trials in England for the England U16 National Team. That was a six-week process where I went to the England training camp and was in residency for about six weeks. Unfortunately, I was cut on the last round, but one of my fondest memories was playing each week and going through the selection process. I really enjoyed the experience and the environment that I was in. At that age it was a time in my life, and in soccer, that I was around great players and I was really enjoying my time and playing very well.

Curran: When I was 16, I went on trial for my favorite club, Manchester United. Being able to go to Carrington, England and go to training every day and being in that environment for four weeks was a really cool experience for me. The ultimate goal as a kid was always to play for your favorite club and to have a chance to do that was probably one of the most special things that I’ve had the opportunity to do.

Q: How does Clemson, South Carolina differ culturally from your home countries? (Coach Jones is from England and Coach Curran is from Australia)

Jones: It’s a bit more rural here. I’m from the outskirts of Liverpool, England, so it is a bit more of an industrial city where I grew up. It’s very different in terms of soccer; in the area I am from soccer is huge; it’s what people live for and what they look forward to every single weekend. Here, people get excited about the other kind of football, but I think that is changing a bit around Clemson right now. There is a lot of excitement around our games, and the crowd is awesome. Hopefully that will continue and we can compete on campus with the fans.

Curran: It is very much different to Sydney, Australia, which is the equivalent to a Los Angeles or New York City in America. The cool thing about Clemson is the college town feel and the family atmosphere, everyone knows and supports each other; coaches, teams and student-athletes. I quite like it here.

Q: What is your favorite part about working with this year’s team?

Jones: There are a lot of returners, so for a lot of the guys there are strong relationships already formed within the group. Obviously with such a fun season last year, there is a really big core of the group that has come back with that experience. The guys that have just come in have really adjusted to the team and I think they have fit in really well. They are a fun group to be around, it’s very easy being around them. The relationship between the whole group is very seamless.

Curran: They are a really great bunch of boys; extremely coachable. They are driven and motivated and they enjoy the time that we get to spend together. The best part of our day is when we get to see them and work with them. It’s a good way to start your morning off with a good bunch of guys that are ready to learn and succeed.

Jones: The other part of it is that there is a seriousness to them as well. The part we enjoy is having banter with them in the locker room, but they go out and train and are pretty competitive with each other, but that stays on the field. When they come back to the locker room, two guys that have been competing really hard against each other in training are having a laugh literally five minutes later. Those things are a good thing for a team to have, when you understand the competitive side of what you’re doing but leave it where it belongs, on the field, and enjoy each other off the field.

Q: What is your favorite thing about working with each other?

Jones: I don’t think a lot of people know this, but we actually live right next to each other as well. If we didn’t get enough of each other all day and all evening in the office and then as roommates on the road, we get to knock on the door for each other in the morning. I think for Liam and I personally, we are a team. Each day we are trying to form and create a team. Our job is to make Coach (Mike) Noonan’s life as easy as possible and I feel like Liam and I are doing the groundwork and creating an environment where things are organized and set up for Coach Noonan to make decisions. That in itself isn’t an easy thing to do because they aren’t always easy decisions. If Liam and I weren’t on the same island, it wouldn’t be nearly as fun and because of the fact that we get along so well together, our production is heightened.

Curran: At the end of the day, you are always more willing to help family and friends. When you create an environment where you are mates, you’ve always got each other’s backs. We aren’t just colleagues who come in and work a 9-to-5 and get out, we are doing things outside of the office together. I think that helps the bond and the camaraderie and everything that we need to get done work related but also socially. We spend a lot of time together outside of these office walls; it makes it easier coming in and enjoying each others company and grinding out days day in and day out.

Q: This year’s team has 11 guys from outside of the United States; how are you able to recruit internationally, and how do you help the new international students acclimate to a new culture and country?

Jones: There are a number of different ways that we get guys from out of the country. We’ve been lucky enough to have the resources to do a lot of traveling and recruiting internationally. Not every program is fortunate enough to have that, and we are. In terms of helping them integrate, both Liam and I have gone through that process that a lot of these kids have gone through. Sometimes it’s not big things that you would think would help an international incorporate into the program, it’s the little things; the visa process, leaving and being away from home for the first time. As they come through this program for the first time, its not just coaches who have been through it, it’s other student athletes. As you come in as a freshman, there are players already here that are going through it and have been through it. There is a big support network for anyone coming from a different country or speaking a different language, it creates a sense of family.

Q: What is one of your biggest goals for the rest of the season?

Curran: Every year we are trying to get better, and although last year was a successful one, I think there are still things out there that the team wants to achieve. That happens with a day-to-day process in training. We want to try and achieve excellence in everything that we do. I think the dream and the ultimate goal is to bring the program to its third National Championship. It is something that is always in the back of everyone’s mind, but at the end of the day we just want to win the next game and see how we will get better as a team. That’s a goal at least for the staff. If you ask the team, I think they definitely want to pursue a championship and do well within the conference, as well as nationally.

Jones: I agree with Liam, I think that is the way that the team has always progressed. There has always been an improvement each year. It’s not about putting pressure on ourselves to nail down specifics, but I think continually getting better, in the way we play and perform, and getting more consistent in how we do things and perform, that will bring the championships. The focus on performance, the focus on quality practices, with that will come national championships as we continue to improve and get better like we have done.