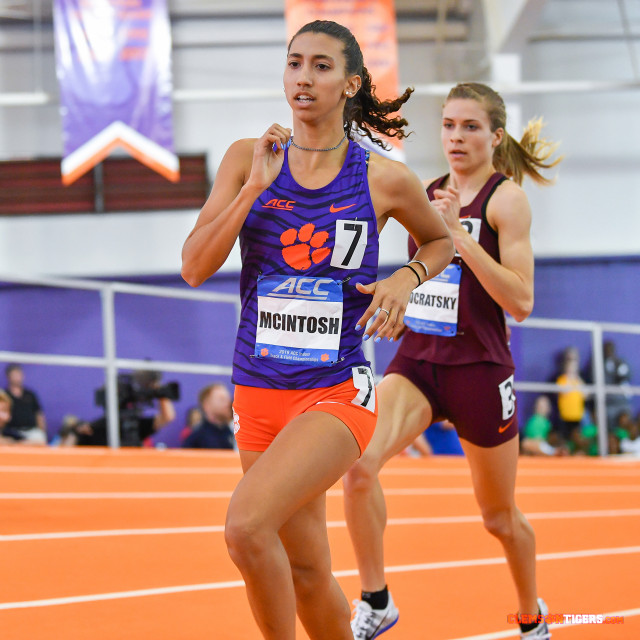 A Change of Heart

Five months into her college track & field career, Kamryn McIntosh is already one of the most decorated freshmen in program history.

The Hillburn, N.Y., native garnered three First-Team All-ACC accolades at the 2018 ACC Indoor Track & Field Championships in the 800m and as a member of both the women’s 4x400m and distance medley relay teams. She is also the only women’s Tiger freshman in history to post a top-three finish in the 800m at the indoor conference championship meet. Her time of 2:03.59 is second in program history, besting Clemson’s previous No. 2 indoor time, which stood for 26 years.

But all of McIntosh’s achievements and accolades in a Clemson uniform almost did not happen.

Last year during the cross country season of her senior year of high school, McIntosh started exhibiting odd symptoms after races, which would lead her and her family to the discovery of something chilling.

“During the beginning of my senior year, I started running cross country, and after every single race, I wasn’t completely drained,” admitted McIntosh. “I was super light-headed, couldn’t open my eyes, stomach issues and would be completely weak. I couldn’t move for at least 30 minutes after each race.”

Luckily, McIntosh rounded out her cross country season with no major problems. On the track, she specialized in the 600m during the track & field season and set the national indoor 600m record as a sophomore in 2015.

McIntosh was less concerned about the symptoms she had endured during cross country, which entails longer races and requires more endurance-based fitness. Without hesitation, McIntosh was full steam head for the track during her senior indoor season. But after a few races, she was still feeling drained after competing.

“I ended up going to the doctor and got bloodwork done. I was super iron-anemic, but then she said I might not be getting enough blood flow to my head or muscles, which was causing me to feel very drained and lightheaded. After that, I went to a cardiologist, who put me through multiple tests.”

The tests indicated what the doctors had anticipated. McIntosh was diagnosed with anomalous aortic origin of the right coronary artery, otherwise known by its acronym, AAORCA. The congenital disease is associated with an increased risk of decreased blood flow to the heart tissue and has been known to cause sudden death in healthy children and young adults.

Doctors told McIntosh she was only receiving 70 percent of her normal blood flow, thus the severe symptoms after competing. She then underwent open-heart surgery.

“I had blood coming out of the wrong spot (through the heart). It was coming out too early, so the blood was coming out…basically hitting another artery and slowly dragging along. The doctors had to cut a hole where it was supposed to come out and cauterize it.”

The surgery lasted 4.5 hours. With a sense of humor and a smile on her face, McIntosh was quick to offer a couple of “fun facts” regarding the procedure.

“I am also bionic. I have six medal rods holding my sternum together.”

Despite her sense of humor, McIntosh understood the seriousness of not only her own medical situation, but others who were diagnosed with AAORCA.

“It is one of the leading causes of sudden death among young athletes. After my surgery, about two to three days after my surgery, I read an article about a boy in Florida who collapsed and had sudden cardiac arrest at track practice due to what I had. So after that, I was determined to make people aware of it. From the time the defect takes (full) effect, within two seconds, your blood flow is cut off.”

Motivated by this young boy’s story in Florida, McIntosh began to raise awareness about symptoms and lethal implications from AAORCA.

“I sent e-mails to so many people. I sent e-mails to MileSplit, RunnerSpace, DyeStat and other outlets trying to get the word out that a lot of people are dying from this and no one seems to realize it.

“It’s also one of those things where there aren’t a lot of symptoms, because the symptoms I had are normal to have after a cross country race, so sometimes it’s good to take precaution and get tested if you feel even the slightest of symptoms.”

Now, over halfway through her freshman campaign, McIntosh has already exceeded the expectations of track & field head coach Mark Elliott, who also happens to be McIntosh’s middle-distance coach. Elliott personally trains McIntosh on a daily basis at practice.

“There were never any expectations for her entering her freshman year because this is new for all of us as it relates to the type of surgery she had,” said Elliott.

Despite the low expectations as a precautionary measure by the Tiger coaching staff, the freshman has carried her momentum into the 2018 outdoor season. McIntosh was a member of the Tigers’ 4x400m relay team, which placed first at the UNF Spring Break Invite.

A week later, McIntosh ran the first leg of the winning distance medley relay unit at the Texas Relays, helping Clemson capture the women’s DMR title at the meet for the second straight season. While also competing at the Texas Relays, McIntosh was a member of the Tigers’ 4x800m relay, which placed second overall, and the 4x400m relay unit, which posted a season-best time of 3:34.96, a time that will most likely qualify it for the NCAA East Regional outdoor meet.

In her first outdoor 800m race at theCrimson Tide Invitational, McIntosh achieved Clemson’s fourth-fastest time in the event, crossing the finish line in 2:06.13.

“She’s a remarkable person to be able to deal with an obstacle like that and we’ll always have patience for her and we’ll never lose sight of that, no matter how successful she is. We will always take the necessary precaution that we have to ensure that her time here at Clemson as a student-athlete is as successful as it can be.”