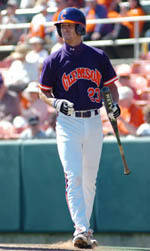 Josh Cribb won his eighth-straight decision, and Tanner Leggett and Travis Storrer both hit home runs to lead #9 Clemson to an 11-2 victory over Virginia Tech on Friday night in front of 5,187 fans at Doug Kingsmore Stadium. The Tigers improved to 31-13 overall and 13-6 in the ACC, while Virginia Tech fell to 17-25 overall, 3-19 in the ACC.

Cribb pitched 7.2 innings and allowed just four hits and two runs. He struck out seven and walked one in running his record to 8-0 for the season. He matched his victory total of the entire 2005 season (8-5) and has a 21-7 record for his career. He is also 7-0 at home this season and has won seven consecutive decisions at Doug Kingsmore Stadium over two seasons.

Cribb allowed a single in the first, a home run in the second, and two singles in the eighth in a masterful performance against Virginia Tech for the second straight year. Last year, he shut out the Hokies on a six-hitter. He allowed just one baserunner between the third and seventh innings on Friday. Hokie starter Greg Fryman took the loss for Virginia Tech and saw his record fall to 3-6.

Cribb received outstanding support from the Clemson offense, as the Tigers had 14 hits and reached double figures in runs scored for the second consecutive game. It marked the first time this year Clemson scored in double figures in consecutive victories. All nine of Clemson’s starters had at least one hit by the fifth inning.

Clemson took a 7-1 lead after three innings and coasted from there. The big inning was a five-run second inning when the Tigers had five hits. Marquez Smith opened the inning with a single and moved to second on a single by Andy D’Alessio, who broke out of a slump with a pair of hits and two RBIs for the game. Smith then scored Clemson’s first run of the inning on a single by Stan Widmann. Two outs later, D’Alessio scored on a single by Brad Chalk and Widmann came across when Chalk’s hit was misplayed by rightfielder Jose Cueto.

Clemson added three runs in the fifth inning, with the key hit a double by D’Alessio. The final run of the contest for the Tigers came in the seventh when Leggett hit his first career home run to left field off reliever Josh Canova. Leggett is a fourth-year junior and the son of Clemson Head Coach Jack Leggett, who gave the Tiger infielder an extra pat on the back as he rounded third base during his home run trot.

Virginia Tech was led by Bryan Thomas, who homered to left off of Cribb in the second inning. Thomas also had a single and joined Nate Parks as the only Virginia Tech batters with a pair of hits in the contest.

The same two teams will play Saturday night at Doug Kingsmore Stadium in a game that will start at 7:00 PM. The series will conclude Sunday afternoon at 1:00 PM.