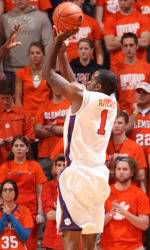  Saturday’s game is just the fifth matchup of two top 10 teams in the history of Littlejohn Coliseum, the first since 1996-97. Clemson is 2-2 in the previous four top 10 matchups at Clemson.

 Junior forward Trevor Booker needs just five points to reach 1000 for his career. He ranks in the top 40 in the nation in blocked shots, rebound average and field goal percentage.

 K.C. Rivers can become the winningest player in Clemson history with a win over Wake Forest. He has played in 84 wins, the same total as Cliff Hammonds (2004-08) and Elden Campbell (1986-90). He has played in 26 wins over ACC teams, just six short of the Clemson record.

 The Tigers are 16-0 for the second time in the last three seasons. In 2006-07, Clemson was the nation’s last remaining unbeaten team at 17-0. The Tigers are one of only three undefeated teams remaining in Division I. The others are Wake Forest, and #1 ranked Pittsburgh.

 Clemson is ranked 9th in the lastest USA Today poll and 10th by AP. This is Clemson’s highest ranking in any poll since Nov. 16, 1997 when the Tigers were fifth by AP and seventh by USA. Clemson has been ranked each of the last five weeks.

 Clemson is looking to start 3-0 in the ACC for the first time since 2006-07 and for just the fifth time in school history.

 Clemson and Wake Forest have played four straight games decided by two points or in overtime. That includes last year when Clemson won at Clemson, 80-75 in overtime.

 Clemson is ranked third in the in the nation according to the latest RPI.

 A win on Saturday would clinch a winning month of January for the Clemson program for the first time since January of 1997. That is Clemson’s only winning January since 1990.