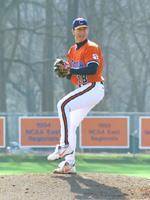 D’Alessio continued his torrid hitting, as he drove in three runs on his two homers. In the last nine games, the Naples, FL native has seven homers and 23 RBIs. Brad Chalk, Taylor Harbin, and Stan Widmann added two hits apiece, as the Tigers had 10 hits on the night. Miami, who totaled six hits in the game, was led offensively by Jemile Weeks’ and Jon Jay’s two hits apiece.

Berken (4-2) allowed only four hits, two unearned runs, and three walks with seven strikeouts in 6.2 innings pitched to record the win. David Kopp, a native of nearby Margate, FL, pitched 2.0 scoreless innings, then Daniel Moskos retired the only batter he faced to record his second save in as many nights. It was the Alta Loma, CA native’s fourth save of the season. Miami starter Manny Miguelez (5-2) suffered the loss, as he allowed five runs on six hits in 7.0 innings pitched.

Two Tiger errors led to a Hurricane run in the first inning. Jay drew a one-out walk, stole second with two outs, and advanced to third on catcher Adrian Casanova’s throwing error. Danny Valencia then hit a routine chopper to third-baseman Herman Demmink, but his throw to first was errant, allowing Jay to score.

In the third inning, #9 hitter Blake Tekotte led off with a walk after being down in the count 0-2. Berken tried to pick off Tekotte, but his throw over bounced in the dirt and got away from D’Alessio, allowing him to move up to second base. Weeks advanced Tekotte to third on a sacrifice bunt, then Jay laced Miami’s first hit of the game through the right side, scoring Tekotte to give Miami a 2-0 lead. Through three innings, the Tigers committed four errors, and both walks issued to Hurricane batters scored.

D’Alessio cut Miami’s lead in half when he hit a line-drive, solo homer just inside the right-field foul pole in the fourth inning.

In the fifth, Clemson took the lead with two, clutch two-out hits. Widmann led off with a single through the right side and went to second on a balk. After Casanova popped up trying to bunt and Demmink grounded out, Chalk came through with a line-drive single just over the head of Weeks at second to plate Widmann. Harbin then belted a double just inside the left-field line to score Chalk all the way from first base, as Clemson took a 3-2 lead.

It looked like the Hurricanes would tie the score in the bottom of the fifth inning. Weeks lined a two-out double to left-center, then Jay hit a sharp single to right. But Travis Storrer threw a perfect one-hopper to Casanova, who easily tagged Weeks for the inning-ending out.

Clemson added three insurance runs in the eighth inning thanks in part to the hot bat of D’Alessio. Chalk drew a leadoff walk on a 3-2 pitch, then Harbin laid down a perfect bunt. Weeks was late to cover first, as Harbin would have beat a good throw anyway. Miguelez’s throw went into right field, allowing Chalk to advance to third. Tyler Colvin then lifted a 1-2 pitch to centerfield, allowing Chalk to score easily on the sacrifice fly. D’Alessio followed with an opposite-field, two-run homer to left to give Clemson a 6-2 lead. It was his second homer of the game and ninth of the season. It was also his second two-homer game of the week and fourth of his career.

Miami brought the tying run to the plate in the ninth inning after a walk, single, and hit-by-pitch, but Moskos struck out the only batter he faced in Yonder Alonso with the bases loaded to end the game.

Clemson and Miami will play the series finale on Sunday at Mark Light Field. First pitch is scheduled for 1:07 PM. The game will be televised live by CSS.