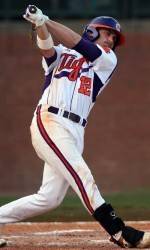 The #8 Clemson Tigers jumped out to an early 2-0 lead and held on to defeat the top-ranked Arizona State Sun Devils 6-3 on Monday in the final opening-round game of the 2010 College World Series.

The first scoring chance of the contest came for Clemson in the top of the first, as Chris Epps led off with a single, stole second, and advanced to third on a throwing error by Arizona State catcher Austin Barnes. Arizona State starter Seth Blair then surrendered back-to-back walks to Jeff Schaus and Kyle Parker to load the bases with one out. Blair was able to escape the jam, as Brad Miller hit a hard liner to Sun Devil shortstop Deven Marrero, who tagged the second base bag to complete an inning-ending double play.

The Tigers opened the scoring in the top of the second, taking advantage of a pair of Sun Devil miscues. Wilson Boyd, both runners advanced a base on a balk by Blair. Spencer Kieboom drove Shaffer home with an infield single to give Clemson a 1-0 lead. Epps hit into what appeared to be another inning-ending double play, but Marrero had his throw sail over the head of Blair, who was covering first. The error allowed Boyd to score to increase the advantage to 2-0. Clemson eventually loaded the bases, but Blair got Parker to ground out to end the inning.

Arizona State mustered its first hit and first run of the contest in the bottom of the third to pull to within 2-1. With one down, Raoul Torrez doubled to left, advanced to third on a wild pitch, and scored on a close play at the plate on Austin Barnes’ sacrifice fly to right.

Clemson added some insurance runs in the top of the fifth, knocking out Blair, who suffered his first loss in 13 decisions. Schaus began the rally with his third straight walk and Parker followed with a single to center, putting two men on. With one down, Wilson Boyd followed with back-to-back RBI singles off reliever Brady Rodgers, extending the lead to 5-1.

The Tigers extended their margin to 6-1 in the sixth, as Epps singled to lead off the inning and advanced to second on a balk before scoring on an RBI single by Schaus.

The Sun Devils started a two-out rally in the bottom of the sixth. After back-to-back walks by Zach MacPhee and Kole Calhoun, Riccio Torrez connected on an RBI single to left center, closing the deficit to 6-2. Still with two on and two out, Clemson starter Casey Harman struck out Zach Wilson swinging to end the threat.

The bottom of the seventh saw Arizona State get back-to-back singles by Johnny Ruettiger and Marrero to lead off the inning. After Raoul Torrez walked to load the bases, Drew Maggi produced an RBI groundout to second base, cutting the Clemson lead to three runs at 6-3. With runners on second and third and two down, Tiger reliever Alex Frederick struck out MacPhee swinging to end the threat.

Clemson, which improved to 6-6 in College World Series opening-round games and have now won four such games in succession, will play Oklahoma at 9:00 PM EDT on Tuesday. The Tigers had five players record a pair of hits apiece and produced 14 hits overall, all of which were singles.

Arizona State lost just its ninth contest of the season overall and Blair fell to 12-1 on the campaign after allowing five runs on seven hits in 4.1 innings pitched. Raoul Torrez’ double was the lone extra-base hit for the Sun Devils, who had eight players record a lone hit apiece. They will take on South Carolina in an elimination game at 4:30 PM EDT on Tuesday.