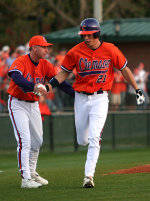 A six-run first inning and a season-high 21 hits contributed to #7 Clemson’s 14-0 win at Duke in the second game of a doubleheader in front of 270 fans at Jack Coombs Field on Monday afternoon. The Tigers took a 2-0 series lead and improved to 35-13 overall, 17-6 in the ACC. Duke dropped to 14-35 overall, 6-20 in ACC play. Clemson defeated Duke 7-4 in the first game of the doubleheader on Monday.

Starter Stephen Faris (6-2) was on a pitch count and earned the win despite pitching just 3.0 innings. He allowed no hits, no runs, and no walks with three strikeouts. Stephen Clyne pitched the next 3.0 innings, allowing one hit with four strikeouts, then Steve Richard, Matt Vaughn, and Drew Fiorenza each pitched a scoreless inning. The five pitchers combined to allow just three hits, no runs, and no walks with 10 strikeouts. Duke did not advance a runner past first base in the game as well. Duke starter Jim Perry (0-5) suffered the loss, as he allowed 10 runs on 13 hits in 4.0 innings pitched.

Herman Demmink led off the game with a double to left-center and went to third on Brad Chalk’s sacrifice bunt. It was his 16th sacrifice bunt of the season, breaking the Clemson single-season record of 15 that he set as a freshman in 2005. Travis Storrer followed with an opposite-field double to the wall in left field to plate Demmink. Colvin then crushed a two-run homer off the batter’s eye in centerfield, his eighth of the season. Harbin followed with a walk and Smith blooped a single to left-center. Andy D’Alessio brought home Harbin with a single to left-center and Stan Widmann walked to load the bases. Casanova then lined a single through the left side to score Smith and Demmink hit a sacrifice fly to center to plate D’Alessio. The Tigers were a combined 6-for-6 with six RBIs in the first inning.

In the third inning, Widmann drew a one-out walk and went to second on Casanova’s line-drive single to left field. After Widmann moved to third on Demmink’s fly ball to right field, Chalk laced a single to right field to plate Widmann.

In the fourth inning, Colvin and Harbin led off with singles. Three batters later, Widmann lined a two-run double down the left-field line and came home on Casanova’s double over the third-base bag, giving the Tigers a 10-0 lead. Widmann’s hit meant every Tiger starter had at least one hit by the fourth inning.

Clemson added to its lead with three runs in the seventh inning. Demmink led off with a single through the left side and D.J. Mitchell singled to right-center. Alex Burg followed with a single up the middle to score Demmink. Two batters later, Harbin loaded the bases with a walk and Smith grounded a two-run double down the left-field line to score Mitchell and Burg.

In the ninth inning, Harbin hit a one-out double over the third-base bag and went to third on a wild pitch, and Smith walked. Hall reached on an error, as Harbin scored on the play.

The game marked Clemson’s largest margin of victory in a shutout in an ACC regular-season road game in history.

Clemson and Duke will play the series finale on Tuesday at 1:00 PM.