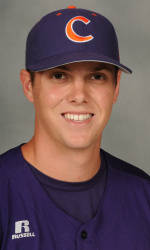 Clemson scored three runs in the seventh inning to tie the score, but Levi Michael broke the tie with a run-scoring double with one out in the eighth inning. The Tar Heels added three more runs in the frame, capped by Colin Moran’s two-out, two-run single.

Twenty-two of Clemson’s 45 batters who stepped to the plate reached base, but Clemson managed just five runs and left 13 on base. Clemson also had four players retired on the basepaths. Conversely, North Carolina scored nine of its 18 baserunners.

Michael Morin (2-1), the last of five North Carolina hurlers, earned the win. In 2.1 innings pitched, he allowed two hits, no runs, and one walk with three strikeouts.

Joseph Moorefield (1-1), the third of five Tiger pitchers, suffered the loss. He surrendered two runs on one hit and a hit-by-pitch in 1.1 innings pitched. In 4.0 innings pitched, starter Dominic Leone yielded just two hits and one earned run with three strikeouts.

The Tigers took advantage of a Tar Heel error in the first inning to take an early lead. Leadoff batter John Hinson reached on an error and moved to second on Will Lamb’s groundout. After Jeff Schaus lined a single to right field to score Hinson.

In the second inning, Jacob Stallings led off with a single on a 2-2 pitch that bounced over Hinson’s head at third a pitch after Stallings just held up on a check-swing. Two batters later, Jesse Wierzbicki laced a 1-2 pitch to right-center for a double to score Stallings.

The Tigers regained the lead in the top of the third inning. Pohl hit a one-out double down the left-field line to extend his hitting streak to 11 games. Shaffer hit the next pitch up the middle for a single to score Pohl. Schaus followed with a single to left field, but the next two Tigers were retired, as Clemson scored just two runs in the first three innings despite putting nine of its first 14 batters on base.

In the bottom of the third inning, Ben Bunting drew a one-out walk, then Michael also walked on a 3-2 pitch that just missed the strikezone. After both runners moved up a base on a passed ball, Tommy Coyle grounded out to first to score Bunting.

In the fifth inning, Bunting led off with a walk when a 3-2 pitch just missed the strikezone, stole second, and moved to third on Michael’s slow roller that second-baseman Steve Wilkerson could not handle. Michael advanced to second on Coyle’s groundout to first, then Stallings hit a grounder to Hinson at third. But his throw was errant and Bunting scored. Moran followed with a hard-hit single off the glove of Shaffer at first to plate Michael, then pinch-hitter Tom Zengel lined out to right to score Stallings on the sacrifice fly.

In the sixth inning, Bunting was hit-by-pitch with one out. Two batters later, Coyle reached on a two-out, infield single to extend his hitting streak to 18 games and stole second while Bunting stayed on third. But Stallings struck out to end the frame.

The Tigers responded with three runs in the seventh inning after they had two outs and no runners on base. Pohl hit a two-out single through the left side and Shaffer walked. Schaus then blooped a single to center to score Pohl. Chris Epps walked to score Shaffer. Brad Miller struck out looking to end the frame.

The Tar Heels came through with four runs in the eighth inning to take the lead. Pinch-hitter Jeff Bouton laced a one-out single to left field and Bunting was hit-by-pitch. Michael gave North Carolina the lead for good when he blasted a double to center to score Bouton and Coyle was intentionally walked to load the bases. Stallings’ sacrifice fly to right field plated Bunting, Coyle stole second, and Moran belted a two-out single to left-center to score Michael and Coyle.

In the ninth inning, Schaus lined a one-out single to right-center. Two batters later, Chris Epps hit a two-out single through the right side, then Stolz was hit-by-pitch to load the bases and bring the potential tying run to the plate. But Jon McGibbon grounded out to third to end the game.

Moran went 2-for-5 with three RBIs, while Michael went 2-for-4 with a double, RBI, two runs, and a walk. Bunting walked twice, was hit-by-pitch twice, and scored three runs as well.

Clemson and North Carolina will play game-three of the three-game series on Sunday at 1:00 PM.