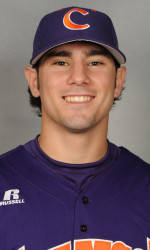 Michael Morin struck out Doug Kingsmore Stadium on Friday. The Tar Heels, who took a 1-0 lead in the series, improved to 11-2 overall and 1-0 in the ACC. The Tigers fell to 6-5 overall and 0-1 in ACC play. It was the Tigers’ fourth one-run loss of the season, and they have lost their five games by a combined seven runs.

The Tar Heels used four consecutive hits to score three runs in the top of the sixth inning to take a 4-1 lead, then Clemson clawed back with two runs in the bottom of the sixth inning. But the Tigers stranded a combined seven runners on base in the last three innings without scoring, including the bases loaded in the ninth inning, and were unable to send Clemson off in winning fashion in Jack Leggett’s 1,200th game as head coach at Clemson.

North Carolina starter Kent Emanuel (4-0) earned the win by tossing 7.0 strong innings. He allowed six hits, three runs (one earned), and no walks with seven strikeouts in throwing 120 pitches (83 strikes). Morin allowed one hit, no runs, and one walk with two strikeouts in 1.1 innings pitched to record his fifth save of the year. The three Tar Heel pitchers combined to strand 10 Tigers on base and allowed just three of Clemson’s 14 baserunners to score.

Tiger starter Kevin Brady (0-1) suffered the loss, as he gave up six hits, four runs, and no walks with six strikeouts in 5.1 innings pitched. Matt Campbell and Scott Firth combined to pitch the last 3.2 innings without allowing a run.

The Tar Heels grabbed the game’s first lead in the first inning. Chaz Frank led off with a single to right field, moved to second on a wild pitch, and advanced to third on Tommy Coyle’s single to center on a 1-2 pitch. Colin Moran then lofted a sacrifice fly to right field to score Frank.

After Emanuel retired the first nine batters of the game, Thomas Brittle laced a leadoff single through the right side in the fourth inning. Two batters later, Richie Shaffer hit a one-out single to left-center, then Pohl was hit-by-pitch to load the bases. But Emanuel retired the next two Tigers to keep the Tar Heels ahead 1-0.

Jason Stolz led off the fifth inning with a double over the first-base bag and scored on Garrett Boulware’s single through the left side to tie the score.

Brady retired 15 batters in a row before Parks Jordan was hit by a 1-2 pitch with one out in the top of the sixth inning. Frank followed with a single through the right side, then Coyle ripped a double to right field to score Jordan and give the Tar Heels the lead for good. Moran lined a single to center to plate Frank, then Jacob Stallings singled through the left side to score Coyle.

In the bottom of the sixth inning, leadoff batter Steve Wilkerson reached on a fielding error by second-baseman Mike Zolk, then Shaffer flared a triple down the right-field line to score Wilkerson. Two batters later, Spencer Kieboom grounded out to first base to score Shaffer to cut North Carolina’s lead to 4-3.

Pinch-hitter Dominic Attanasio led off the ninth inning with a single to left field. Pinch-runner Tyler Slaton moved to second on Jon McGibbon’s sacrifice bunt, then Brittle flied out to left-center for out #2. Wilkerson fouled off five two-strike pitches before being hit with a 1-2 pitch, then Shaffer walked on four pitches to load the bases. But Pohl struck out on a 1-2 pitch to end the game, as Clemson lost its fourth straight Friday game, all by one run.

Frank led the Tar Heels by going 2-for-3 with two runs and a walk, while Coyle was 2-for-3 with a double, RBI, run, and steal. Moran added a game-high two RBIs for the Tar Heels, who left just four runners on base. Mike Fox registered his 600th win as head coach at North Carolina as well.

Shaffer went 3-for-4 with a triple, RBI, run, and walk to lead the Tigers, who outhit North Carolina 8-7.

Clemson and North Carolina will play game-two of the three-game series on Saturday at 2:00 PM.