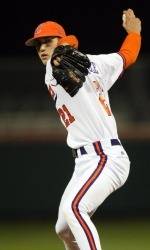 The Tigers jumped out to a 3-0 lead in the top of the first inning, but Tommy Coyle responded with a two-run homer in the bottom of the first. That long ball began a streak of 13 unanswered runs by the Tar Heels, who pulled away with a six-run fifth inning thanks in large part to two Clemson errors.

Starter Patrick Johnson (6-0) pitched 7.0 strong innings and threw 122 pitches to earn the win. He allowed just four hits (three of which were in the first inning), three runs, and four walks with a career-high-tying 11 strikeouts. The four Tar Heel pitchers combined to limit Clemson to only two hits in the final eight innings. The hurlers also combined for 13 strikeouts, 13 flyball outs, and one groundball out in the game.

The Tigers wasted little time taking the game’s first lead in the top of the first inning. John Hinson led off with a walk. Two batters later, Jeff Schaus walked, then Chris Epps lined a two-out single through the left side to score Schaus as Pohl moved to third. Will Lamb followed with a bunt single to plate Pohl.

In the bottom of the first inning, Ben Bunting led off with an infield single and stole second. Two batters later, Coyle blasted a two-run homer to right field on the 11th pitch of his at-bat, his second long ball of the season. It also extended Coyle’s hitting streak to 17 games.

In the third inning, Levi Michael drew a one-out walk and stole second. Two batters later with two outs, Jacob Stallings walked on a 3-2 pitch that just missed the strikezone. The Tar Heels capitalized when Colin Moran followed with a single to left field to plate Michael, then Jesse Wierzbicki hit a hard grounder under shortstop Jason Stolz’s glove to plate Stallings and give North Carolina the lead for good.

Baldwin hit a solo homer to right field in the fourth inning, his third home run of the year, to double North Carolina’s lead.

In the fifth inning, the Tar Heels took advantage of two costly Tiger errors to add six runs, only one of which was earned, to their lead. Coyle led off with a single up the middle, stole second, and moved to third on Stallings’ single through the right side on an 0-2 pitch. Coyle scored when Moran reached on a fielder’s choice, while Stallings was safe at second on an error by Stolz on the play. Wierzbicki laid down a sacrifice bunt and was safe when pitcher David Haselden booted the ball to load the bases with no outs. Chaz Frank grounded out to second to score Stallings and Tom Zengel walked to reload the bases. Baldwin then hit a chopper right at a drawn-in Pohl at first base, but the ball bounced high enough to go over his head for a single to score Moran and Wierzbicki. Bunting followed with a line-drive single to right field to score Zengel, then Michael lofted a sacrifice fly to center to score Baldwin and give North Carolina an 11-3 lead.

In the seventh inning, another Clemson error led to two Tar Heels runs. Zengel reached on a one-out, infield single and Baldwin walked. Bunting reached on a fielder’s choice to Hinson at second, while Baldwin was safe at second on Hinson’s throwing error. Zengel scored on the error as well, then Michael grounded out to second to plate Baldwin.

Baldwin, the #9 batter in the starting lineup, led North Carolina’s 10-hit attack with two hits and three RBIs. Coyle went 2-for-5 with a homer, two RBIs, two runs, and a steal, while Bunting added two hits and an RBI.

Pohl went 2-for-3 with an RBI, a run, and walk to lead the Tigers, who totaled five hits in the contest.

Clemson and North Carolina will play game-two of the three-game series on Saturday at 2:00 PM.