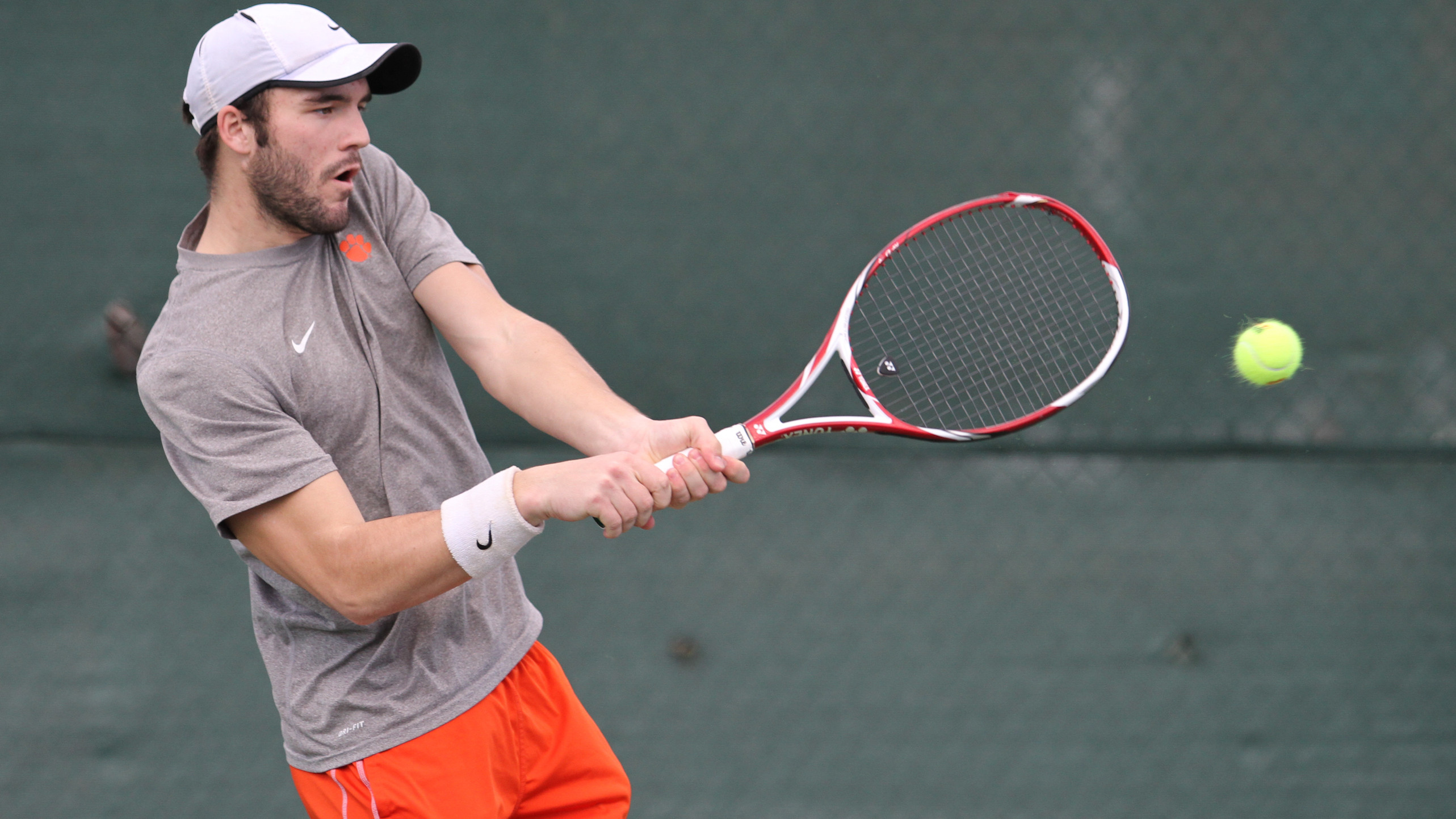 CLEMSON, SC – Yannick Maden won his 12th singles match of the season in leading #57 Clemson to a victory over #45 Alabama in a men’s intercollegiate tennis match at Clemson, SC Friday afternoon.With the win, Clemson is now 7-1 on the year, while Alabama falls to 7-3 this season.  The Tigers won the doubles point and won four singles matches to claim the win.Maden is now 12-4 on the year and has a 6-1 mark in dual matches this season.  He is ranked 83rd nationally.  Today, Maden defeated #86th ranked Beck O’Shaughnessey at number-one singles 6-2, 6-4.”It was a great win for our team,” said Yannick Maden.  “We battled a good team as well as the wind and the sun in today’s match.  We got the job done, we must now get ready for Louisville on Sunday.”The Tigers’ Hunter Harrington upset #122nd-ranked Jarryd Botha 6-4, 3-6, 6-3 at number-two singles.  Alabama’s Daniil Proskura defeated Gerardo Meza at number-three singles, and Philippe Tsangarides of Alabama defeated Ayrton Wibowo at number-four singles 6-3, 3-6, 7-5.The Tigers’ Zachary Rigsby won at number-five singles as he defeated Harris Barnard in straight sets 6-3, 6-1.  Clemson’s freshman, Austin Ansari won over Carlos Taborga at number-six singles 6-2, 6-2.Clemson’s number-one doubles team of Maden and Rigsby defeated the Crimson Tides’ Jarryd Botha and Becker O’Shaughnessey 8-6 at number-one doubles.”Things went really well for us as a doubles team,” said Zachary Rigsby.  “We have been improving.  I thought Yannick and I moved well together as a doubles team today.  This was a good win for our team – we ready needed it,” said Rigsby.Clemson Head Coach Chuck McCuen also was pleased with the victory over Alabama.

“Instead of putting our foot in the door, we are going through the door,” said McCuen.  “In other words, instead of hoping to win, we are expecting to win.  Our confidence has improved this season.  We continue to fight and improve.  Winning the doubles point today was huge and built our confidence and we prepared for the singles matches.”Although he didn’t win his match, Ayrton Wibowo helped us keep the momentum by playing hard and forcing the third set.  I was really proud of his effort.  Yannick and Hunter both had great wins.  I also thought the two early wins that Austin and Zachary gave us was big.  They both won in straight sets.”We must stay focused and prepare for a good Louisville team that is coming in here Sunday,” said McCuen.Clemson will play host to #35 Louisville on Sunday morning at 11:00 a.m. at the Hoke Sloan Tennis Center.  In case of inclement weather, the match will be played at the indoor facility that is part of the Hoke Sloan Tennis Center.Clemson 5, Alabama 2