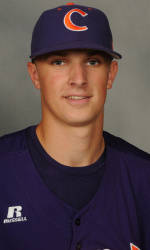 Virginia native Will Lamb pitched 7.0 strong innings to lead #5 Clemson to an 8-5 win over #1 Virginia in the first game of a doubleheader in front of a school-record 3,540 fans at UVa Baseball Stadium on Saturday. The Tigers, who evened the series 1-1 and snapped a seven-game road losing streak to Virginia, improved to 18-5 overall and 7-1 in the ACC. The Cavaliers fell to 19-4 overall and 6-2 in ACC play.

Lamb (3-0), a native of Seaford, VA, allowed just five hits, two runs (one earned), and two walks with two strikeouts in a career-high 7.0 innings pitched to earn the win. David Haselden pitched the final 1.1 innings to record his second save of the year.

Virginia reliever Whit Mayberry (0-1) suffered the loss, as he gave up three runs in 1.1 innings pitched.

The Cavaliers took the game’s first lead in the bottom of the third inning thanks in part to a Tiger error. Stephen Bruno led off with a single to right field and went to third on Lamb’s throwing error on a failed pickoff attempt. Phil Gosselin followed with a sacrifice fly to score Bruno.

The Tigers took the lead in the fifth inning, but missed out on an opportunity to pad its lead. Chris Epps led off with a double down the right-field line and advanced to third on Mike Freeman’s bunt single. Jeff Schaus followed with a single up the middle to score Epps. Freeman was retired at third on Kyle Parker’s attempted sacrifice bunt, then Wilson Boyd singled through the right side to score Schaus. It extended his hitting streak to 14 games. With runners on second and third, Brad Miller followed with a flyball out to right field, then Parker was thrown out at the plate by Dan Grovatt for the inning-ending out on the double play.

In the sixth inning, Gosselin led off with a single up the middle and Tyler Cannon followed with a sharp single through the left side. Grovatt walked to load the bases with no outs, then Steven Proscia grounded into a double play as Gosselin scored the tying run.

The Tigers came right back and took the lead in the seventh inning. Epps led off with a walk, stole second, and went to third Schaus’ groundout. Then with two outs, Epps scored on a balk by Mayberry.

Clemson added to its lead in the top of the eighth inning. Miller reached with one out on a hit-by-pitch, stole second, and went to third on a wild pitch. After John Hinson walked and stole second, Addison Johnson then popped a bunt up over the pitcher, but it fell safely for a single to score Hinson, upping Clemson’s lead to 5-2.

The Cavaliers put the pressure on in the bottom of the eighth inning. Cannon and Grovatt hit one-out singles. Two batters later, Jarrett Parker loaded the bases with a two-out single off Kyle Parker’s glove at first base. John Hicks then lined a 2-2 pitch to left field for a single to score Cannon and Grovatt, cutting Clemson’s lead to 5-4.

Clemson responded with three runs in the top of the ninth inning thanks to two Cavalier errors. Kyle Parker’s reached with one out on a fielding error by Cannon. Boyd followed with a potential inning-ending double-play grounder, but Cannon dropped the throw from second. Miller walked to load the bases, then Hinson lined a 1-2 pitch to right field for a single to score Parker. Pohl followed with a sacrifice fly to center to score Boyd.

In the bottom of the ninth inning, Kenny Swab hit the first pitch of the inning over the left-field fence for a solo homer, his second long ball of the season. Two batters later, Gosselin walked and Cannon struck out for out #2. Haselden then got Grovatt to strike out looking to end the game.

Johnson had two hits and two RBIs to pace Clemson’s nine-hit attack. Hicks had two RBIs to lead Virginia, who had 10 hits in the game.

The win over the Cavaliers was Clemson’s 11th over a #1-ranked team in school history and its first since beating #1 South Carolina 3-2 on the road on April 5, 2006.

Clemson and Virginia will play the second game of the doubleheader and series-finale on Saturday at approximately 7:40 PM.