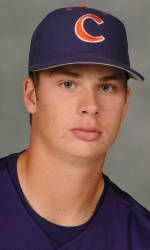 Three Tiger pitchers combined for 14 strikeouts, including nine by starter Kevin Brady, to lead #5 Clemson to an 8-0 win over Michigan State in front of 4,287 fans in the First Pitch Invitational at Fluor Field on Sunday afternoon. The Tigers, who went 3-0 in the second-annual round-robin tournament, improved to 5-1 on the season, while the Spartans fell to 5-1.

Brady (2-0), a sophomore from Gaithersburg, MD, pitched a career-long 7.0 innings in a starting role to earn the victory. He allowed just four hits, no runs, and no walks with nine strikeouts. Will Lamb pitched 1.2 perfect innings with four strikeouts, then Alex Frederick struck out the only batter he faced to close out the game. The trio of hurlers allowed just four baserunners and combined to face only two batters over the minimum. Only two Spartans reached second base, both on doubles, and no Spartan advanced past second base in the game.

The Tigers took the game’s first lead in the second inning. Richie Shaffer led off with a walk. Two batters later, Spencer Kieboom bounced a one-out single through the right side to advance Shaffer to third. Lamb then hit a high flyout to shallow left-center. Shaffer held at third as the throw to the infield was cut off by first-baseman Jeff Holm. Kieboom tagged up and was headed for second base, but he put on the brakes and fell down. After getting up, Kieboom raced back to first base as Holm gave chase in an attempt to tag Kieboom. Meanwhile, Shaffer took off for home and just beat the throw at the plate from Holm.

In the third inning, Chris Epps’ single through the right side on a 1-2 pitch. After Epps stole second and third and Jeff Schaus was hit-by-pitch, Shaffer hit a sacrifice fly to deep right field to plate Epps, giving Clemson a 3-0 lead.

Clemson added to its lead in the fourth inning. Lamb reached on a one-out, bunt single. Two batters later, Stolz hit a high flyball with two outs to shallow right field as Lamb was running on the pitch. The ball fell in safely for a single and Lamb scored from first on the play.

In the eighth inning, Shaffer hit an opposite-field, solo home run over the right-field foul pole, his first long ball of the season, to give the Tigers a 5-0 lead.

The Tigers added three insurance run in the ninth inning. Pinch-hitter Addison Johnson’s infield single. Stolz followed with a single through the left side to plate Wilkerson. Johnson and Stolz both moved up a base on a steal, then two batters later, Miller lined a triple down the right-field line to score Johnson and Stolz.

Clemson, who outhit the Spartans 12-4, was led at the plate by Stolz, who went 3-for-4 with a double, two runs, two RBIs, and one of Clemson’s four steals in the game. Epps and Kieboom added two hits apiece as well.

Clemson will return to action when it hosts Wofford on Wednesday at 4:00 PM at Doug Kingsmore Stadium.