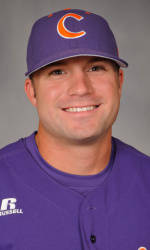 Twelve different Tigers had at least one hit and four Tiger pitchers combined on a four-hitter in #5 Clemson’s 19-1 victory over Charleston Southern in front of 5,089 fans in the First Pitch Invitational at Doug Kingsmore Stadium on Saturday afternoon. The Tigers improved to 4-1 overall, while the Buccaneers fell to 2-4.

Starter Justin Sarratt combined to allow just four hits, including none after the third inning.

The Tigers wasted little time taking the game’s first lead in the first inning. Chris Epps led off with a single to right field and went to third on Brad Miller’s double over the third-base bag. Jeff Schaus followed with a sacrifice fly to center, then John Hinson laced a single through the right side and Shaffer scored on the play when the throw from the outfield was errant. After Hinson stole third, he scored on Spencer Kieboom’s sacrifice fly to right field.

In the second inning, Epps, Schaus, and Shaffer all drew walks. Then with two outs, Hinson belted the first pitch he saw over the fence in right field for a grand slam, his first long ball of the season and second career grand slam.

The Buccaneers dented the scoreboard in the top of the third inning. Brandon McKinney hit a one-out triple to right field and Brantley Meier beat out an infield single. Jaren Sustar followed with a single to left-center to plate McKinney. Two batters later with two outs, Derek Smith hit a liner to deep left field, but Schaus made a diving catch to save at least one run.

Clemson responded with two runs in the bottom of the third inning. Will Lamb led off with a walk and Phil Pohl reached on an error. Two batters later, Epps laced a triple down the right-field line to score Lamb and Pohl.

In the fourth inning, Shaffer led off with a walk. Two batters later, Kieboom singled through the left side, then Shaffer scored on a sacrifice fly by Lamb down the left-field line. Pohl followed with a two-run homer to left field, his first long ball of the season, to give Clemson a 13-1 lead.

Clemson added three insurance runs in the eighth inning. Pinch-hitter Jon Surber hit a one-out single through the left side. Dominic Attanasio and Steve Wilkerson both singled to load the bases, then Joe Costigan lined a single to right field to plate Surber. Jon McGibbon was hit-by-pitch to score Attanasio. Two batters later, Cox grounded a two-out single up the middle to score Wilkerson.

Epps went 3-for-3 with a triple, three runs, two RBIs, a walk, and steal to lead Clemson’s 18-hit attack. Hinson went 2-for-4 with a grand slam and five RBIs, while Shaffer went 2-for-2 with four runs, an RBI, and two walks.

Sustar went 1-for-3 with a walk and Charleston Southern’s lone RBI.

Clemson will play its third of three games in the First Pitch Invitational on Sunday at 1:00 PM against Michigan State at Fluor Field in Greenville, SC.