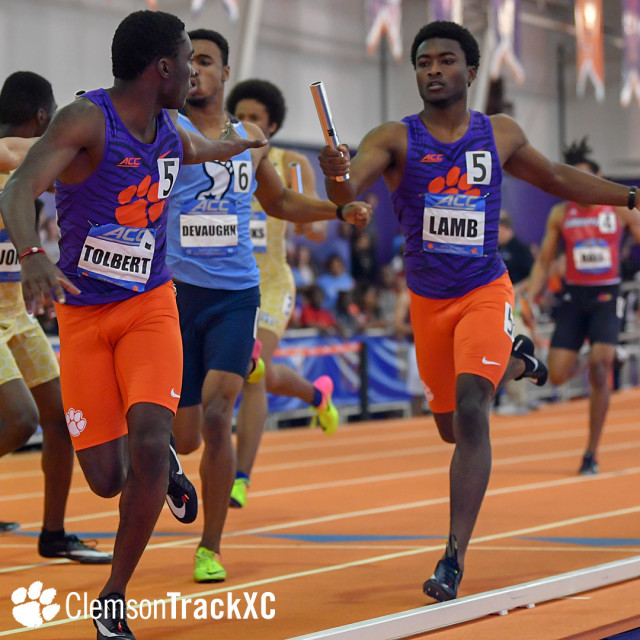 CLEMSON, S.C. – The Clemson men’s and women’s track & field 4x400m relay teams made history Saturday as both units set new conference championship meet records on its home track at the Clemson Indoor Track & Field Complex. Additionally, Clemson’s Jeffrey Green and Jeremiah Green both claimed conference titles and set the program records in their respective events. Both Clemson teams placed third overall for the meet with men totaling 76 points, while the women tallied 73 points to tie for third place with Louisville. “I think both teams performed well,” said head coach Mark Elliott. “We projected our team scores, and they were right around where we predicted, but we just ran up against two good teams that were better than us today. I think individually, based on performance, everyone performed what we expected of them, or even above. You would like to win at home, and that was our goal, but Florida State had a better meet, so we have to give respect to them. But I was very happy overall with our performance.”

In the final event of the day, Cordell Lamb, Deonte Tolbert, John Lewis and Jeffrey Green edged North Carolina in the third and final heat to shatter the conference meet record, which was set by Lamb, Michael Cheeks, Terrell Jackson and Green at last year’s ACC championship at Notre Dame. Lamb, Tolbert, Lewis and Green turned in a time of 3:07.78 in route to garnering All-ACC status. The Tiger men have now won four straight indoor 4x400m conference titles and six of the last eight.

On the women’s side, Olivia James, Kendra Clarke, Kamryn McIntosh and Fellan Ferguson posted their season best time of 3:32.84 to tally 10 points for the Tigers. Clemson also broke its own conference championship record, which was set in 2015 by James, Nia Fluker, Deja Parrish and Notoya Goule (3:32.87).

Jeffrey Green, a senior, re-wrote his name in the Clemson record book after besting his own 400m dash program record. He crossed the finish line in 45.82 to win his third straight 400m indoor conference title. Green set the previous program record in the event just two weeks ago at the Tiger Paw Invitational when he ran in 45.87 seconds.

Finishing just behind Green in the 400m dash, was Cordell Lamb who PR’d in the event with a time of 46.04 seconds – his personal best – and now the No. 3 time in Clemson history. The senior also took home his second silver medal of the day after placing second in the 200m dash, again achieving his personal best in the event, with a time of 20.74. His time in the 200m dash is good for No. 5 all-time in program history. Lamb led all Clemson scorers for the meet, accumulating 18.5 of Clemson’s 76 points.

Jeremiah Green, a fifth-year senior transfer from Alabama, claimed his first conference title in the triple jump since winning the 2014 SEC indoor title as a member of the Crimson Tide. Green posted a best-leap of of 16.39m to become Clemson’s first indoor triple jump champion since 1999 and third-ever ACC triple jump champion in program history. His mark of 16.39m on his fifth jump is also the program record. On his second jump, Green achieved a distance of 16.37m, which still would have earned him this year’s ACC title outright.

In addition to both Jeffrey Green and Jeremiah Green, John Lewis wrote his name atop of the Clemson record book in the men’s 800m run. Lewis, who totaled two All-ACC weekly honors this season, placed second with a personal best time of 1:47.04. The junior previously held the Tigers’ No. 2 time in the 800m. With today’s result Lewis surpassed Andrew Beecher’s 1992 all-time record of 1:48.27.

Rebekah Smith highlighted the women’s effort Saturday after sweeping bronze in the women’s 60m and 200m dashes. Smith, who currently holds the third-best 60m dash time in Tiger history, crossed the finish line in 7.27 seconds. In the 200m dash, Smith achieved her personal best with a time of 23.30 seconds. The sophomore now owns three First Team All-ACC distinctions. Torie Robinson placed fifth in both the 60m and 200m dashes behind Smith. The senior ran in 7.30 seconds in the 60m and a personal-best 23.56 seconds in the 200m to earn her fourth career All-ACC recognition.

In the women’s mile, Grace Barnett (4:38.71) set her season best in Saturday’s final after nearly catching Notre Dame’s Jessica Harris (4:38.58) on the final straight away. The senior has now combined for eight All-ACC honors in her career, having claimed an accolade in every mile and DMR event at the ACC indoor championships from 2014-18.

In the women’s 400m dash finals, James ran a 53.35 to take home the bronze in route to capturing her fourth All-ACC honor of her career. James, who went on to to earn her fifth in the 4x400m relay, currently holds Clemson’s No. 2 time in the 400m dash at 53.24 seconds. Behind James in the 400m, was Clarke who placed fifth in Saturday’s finals. The newcomer posted her personal best of 53.46 seconds to garner Second Team All-ACC status.

Senior Kirk Lewis took home the bronze in the 60m hurdles after leaning across the finish line in 7.79 seconds in Saturday’s finals. Lewis now owns two All-ACC First Team accolades in his career and ranks sixth in Clemson history in the 60m hurdles.

In the cage, Grant Voeks registered four points for the Tiger men after nabbing his personal best in the shot put with a heave of 17.18m. The sophomore now ranks ninth all-time in Clemson history.

Up next, the Tigers return to College Station, Texas, March 9-10 for the 2018 NCAA Indoor Track & Field Championships. Streaming and live results links will soon display on clemsontigers.com.