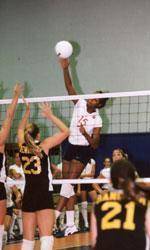 Clemson was led by Lori Ashton, who performed very well for the Tigers. She had 13 kills, a .348 hitting percentage, and five total blocks. Leslie Finn chipped in with eight kills, and Stephanie Haskell handed out 17 assists.

“We made game one very exciting,” said Jolene Jordan Hoover, head coach for the Tigers. “The scores in games two and three were not indicative of losing a tight one in game one. We played hard against a very good and athletic Florida team.”

In game one, Florida got out to a quick 9-3 lead before Clemson began to slowly chip away at the margin. The Tigers actually tied the game at 24-24, but Florida gained the two-point edge finally at 36-34. Finn had six kills in game one alone.

Florida scored the last eight points of game three to pull away from Clemson. Kisya Killingsworth had four kills in the game to help the Gators clinch the match.

Clemson does not return to action again until Friday, September 24 when the Tigers play host to N.C. State at 7:00 PM in their first conference action of the 2004 season. Clemson then plays North Carolina the following night at 6:00 PM.