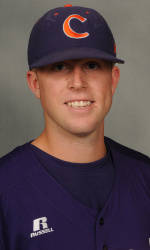 The #25 Clemson Tigers scored in six of their eight innings at the plate in a 9-3 win over Florida Gulf Coast in the first game of a doubleheader at Doug Kingsmore Stadium on Sunday afternoon. The Tigers, who evened the series 1-1, improved to 26-17, while the Eagles dropped to 28-14. It was also Jack Leggett’s 750th career win as Clemson’s head coach.

Tiger starter Scott Weismann (4-2) earned the win in 5.0 innings pitched. He allowed five hits, three runs, and three walks with five strikeouts. Tomas Cruz pitched 4.0 scoreless innings to record his second save of the year. Weismann and Cruz combined to strand 11 runners on base.

Clemson grabbed the game’s first lead in the second inning. Jeff Schaus hit a one-out single through the left side. Brad Miller lined an opposite-field double down the left-field line as Schaus moved to third, then Schaus scored on the play on a fielding error by Alex Lozada. Wilson Boyd followed with a double to right-center to plate Miller.

The Eagles came right back and tied the score in the top of the third inning. Mikel Alvarez led off with a single up the middle. Two batters later, Zach Maxfield crushed a two-run homer to center, his sixth long ball of the season.

In the bottom of the third inning, the Tigers put their leadoff batter on base for the first time in the series when Will Lamb led off with a single up the middle. Lamb moved to second on Mike Freeman’s groundout and advanced to third on a passed ball. After John Hinson walked, he took off for second base on the pitch that Kyle Parker struck out on. Hinson just beat the throw to second and Lamb scored on the double steal. Schaus then ripped a two-out single to left field to score Hinson.

The Eagles cut Clemson’s lead in half in the top of the fifth inning. Alvarez hit a one-out single through the right side and Tim Roberson followed with a single up the middle on a 1-2 pitch. After Maxfield’s walk loaded the bases, Josh Chester lofted a sacrifice fly to center to score Alvarez. Luke Smierciak then belted a deep drive to left-center, but a strong wind blowing in kept the ball in the park and Schaus made the catch to keep the Tigers ahead 4-3.

In the bottom of the fifth inning, Lamb led off with a walk and scored on Freeman’s misplayed double to left field, which extended his hitting streak to 11 games. After Freeman moved to third on a wild pitch, he scored on Hinson’s single up the middle.

Clemson added a run to its lead in the sixth inning. John Nester lined a one-out single to center. Two batters later, Lamb laced a two-out single off the pitcher and Freeman loaded the bases with a walk. Hinson drew another walk to bring home Nester, upping Clemson’s lead to 7-3.

In the seventh inning, pinch-hitter Chris Epps followed with a deep drive to right field, but the wind again kept the ball in the park for the inning-ending out.

Freeman lined a solo home run to right field in the eighth inning, his sixth long ball of the year. Two batters later, Parker lofted a long flyball to right-center, but the wind kept it in the park for the inning-ending out.

Alvarez had a game-high three hits and two runs for Florida Gulf Coast, who had nine hits in the game.

Clemson and Florida Gulf Coast will play the second game of the doubleheader on Sunday at approximately 4:40 PM.