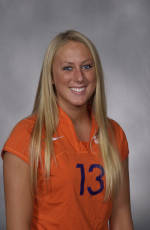 CLEMSON, SC – The Clemson volleyball team was defeated by 25th-ranked Maryland, 3-1, on Saturday night. The Terrapins improved to 15-1 on the season, including a 5-1 mark in conference play, while the Tigers fall to 8-6 overall and 3-3 in the ACC.

The Tigers came out ready to play taking the first game from the Terps, 30-27. Ross tallied eight kills in the game and Stanton had two of her five service aces. Clemson held an early 6-1 lead, but Maryland managed to tie the score at nine apiece. They were unable to take the advantage and Clemson scored five and last seven points for the win.

Maryland responded in game two, winning the match by a score of 30-25. They then claimed games three and four to post the victory. Clemson did not go down easily in the fourth game; the Tigers battled back from an 18-11 deficit to come within one point of Terrapins at 24-23. Maryland held on for the 30-25 win.

Up next for Clemson is a trip to North Carolina to face N.C. State and North Carolina. The Tigers and Wolfpack will take to the court at 7:00 PM on Friday, Oct. 14 in Raleigh, NC, and Clemson will meet the Tar Heels in Chapel Hill on Saturday, Oct. 15 at 7:00 PM.