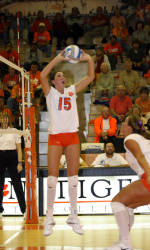 Sophomore setter Kelsey Murphy led the Tigers to a .396 team hitting percentage. The Clemson defense held the Terps to a .125 figure, forcing them to commit 23 errors in the match.

In all, Murphy recorded 42 assists in the match, while registering a career-high seven service aces, including four in a decisive 9-0 run in the third game.

Clemson jumped out to a 1-0 lead with a 30-26 win in Game One. The Tigers went on 10-4 run to take the lead for good at 23-21 on consecutive kills by sophomore outside hitter Lia Proctor. Murphy added 20 assists in the game, and five different Tigers registered more than four kills.

In the second game, the Tigers went on a 22-6 run to cruise to victory 30-12. Six different Tigers recorded at least one kill in the game, and Murphy tallied 11 assists, leading the team to a .462 hitting percentage with 13 kills and just one error. Murphy was the key, as the Tigers went on a 9-0 run to stretch their lead from 8-6 to 16-6. She added three aces during the run. The Tiger defense was equally impressive, holding Maryland to a -0.027 percentage.

The Terps come out of the gate quickly in the third game, jumping out to a 9-6 advantage early on. When the Tigers regained the serve, sophomore Didem Ege served a quick 5-0 run, led by two block solos and two kills from junior Danielle Hepburn.

Later, with the Tigers’ lead at 20-13, Murphy served up four aces and Leslie Mansfield knocked down two kills to push the lead to 29-13, before senior Meghan Steiner notched the 30th point, clinching the outright ACC Championship title for the Tigers.

Clemson will travel to Boston College to face the Eagles on Friday at 12:00 p.m. With a win on Friday, the Tigers can tie the single-season ACC wins mark at 21.

“This win was big for this team to win it outright,” said Tiger Head Coach Jolene Jordan Hoover. “We’ve won some big matches and I’ve been really impressed at how well we’ve played. This group has done a good job of staying consistent when playing on the road.”

“I have been impressed by so many of our players, but tonight, Kelsey (Murphy) continued to impress me. For our team to hit .400 on the road, and for her to keep putting us in a position to win has been huge,” Hoover added.

“I think there are two things that set this team apart from a pure volleyball standpoint. First, there is balance – we don’t rely on any one person every night. The other is we don’t have a lot of broken plays. We have not given away points through miscommunication and broken volleys.”