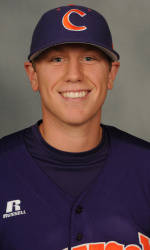 Jeff Schaus’ two-out single in the eighth inning gave the Tigers the lead and Alex Frederick retired all five batters he faced in #25 Clemson’s 7-6 win over Florida Gulf Coast in the second game of a doubleheader in front of 4,745 fans at Doug Kingsmore Stadium on Sunday. The Tigers, who took a 2-1 series lead and won both games of the doubleheader on Sunday, improved to 27-17. The Eagles fell to 28-15.

The Eagles held a 4-2 lead before Clemson scored three runs in the seventh inning to take a 5-4 lead. Florida Gulf Coast capitalized on a Tiger error in the top of the eighth to score two runs and regain the lead. But the Tigers rallied for the second inning in a row in the bottom of the eighth and scored two runs, capped by Schaus’ go-ahead single.

Frederick (2-1) earned the win by retiring each of the last five Eagles with two strikeouts to close out the game. Jacob Barnes (2-2), the second of three Florida Gulf Coast pitchers, suffered the loss. He allowed two runs on three hits in 1.2 innings pitched.

Clemson took the game’s first lead in the second inning. Richie Shaffer hit a two-out double that was misplayed by Alex Lozada in left field. Phil Pohl then hit a double to right-center to score Shaffer.

In the third inning, Stephen Wickens led off with a walk and Mikel Alvarez singled through the left side. With no outs, Josh Chester loaded the bases with a single to left field on an 0-2 pitch. Zach Maxfield then grounded a single up the middle to score Wickens and Alvarez, but the next three Eagles were retired to keep Clemson within one run.

The Eagles doubled their lead in the fourth inning. Lozada led off with a bunt single and advanced to second on Joe Guarnaccia’s sacrifice bunt. Two batters later, Alvarez walked, then Chester hit a two-out single through the right side to score Lozada. It was Florida Gulf Coast’s first two-out RBI in the series.

In the fifth inning, Mike Freeman, who earlier extended his hitting streak to 12 games, hit a one-out single to right-center and stole second with two outs. After Kyle Parker walked, Schaus fisted a single to right field to score Freeman, cutting Florida Gulf Coast’s lead to 3-2.

Wickens led off the sixth inning with a single to right field on a 1-2 pitch and stole second. Two batters later, Chester grounded a one-out single through the right side to score Wickens.

Freeman led off the seventh inning with a walk, stole second, and scored on John Hinson’s double to right field. Parker walked on four pitches and Hinson advanced to third on a wild pitch, then Schaus hit a sacrifice fly to left-center to plate Hinson and tie the score 4-4. After Brad Miller singled to left-center, Parker and Miller moved up a base on a passed ball. Shaffer gave the Tigers the lead when he grounded out on an 0-2 pitch to score Parker.

Guarnaccia led off the top of the eighth inning with a bloop single to right-center. Wickens popped up a bunt. Will Lamb came off the mound to his left and dove for the ball but was unable to catch it. Pohl, the catcher, retrieved the deflected ball near the first-base line and had enough time to retire the batter at first. Guarnaccia would have also been caught between first and second for a likely double play. But Pohl’s throw to first hit Wickens in the helmet and ricocheted down the right-field line. Wickens moved to third on the error and came around to score on the play when Freeman’s throw to third was errant. Alvarez then grounded a double down the right-field line to score Wickens and give the Eagles a 6-5 lead with no outs. Chester’s groundout advanced Alvarez to third, but Maxfield struck out and Luke Smierciak grounded out to keep Clemson behind by only one run.

Addison Johnson led off the bottom of the eighth inning with a single through the left side on a 1-2 pitch and stole second. Lamb’s groundout advanced Johnson to third, then Freeman lofted a single to right-center to score Johnson. Freeman was erased at second on Hinson’s fielder’s choice and Parker walked. Schaus came through with a two-out single through the right side to score Hinson, giving the Tigers a 7-6 lead.

Every Tiger starter had at least one hit. Freeman went 3-for-3 with an RBI, two runs, a walk, and two stolen bases to lead Clemson’s 15-hit attack. Schaus went 3-for-4 with three RBIs, while Miller and Johnson added two hits apiece. The Tigers also tied their season high with six stolen bases.

Chester went 4-for-5 with two RBIs and Alvarez went 3-for-4 with two doubles and an RBI to lead Florida Gulf Coast, who had 13 hits.

Clemson and Florida Gulf Coast will play the series-finale on Monday at 6:30 PM.