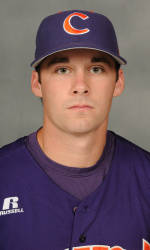 Brad Miller went 2-for-4 with a homer and four RBIs, and Justin Sarratt tossed 6.0 scoreless innings of four-hit ball to lead #23 Clemson to a 5-0 victory over Furman at Doug Kingsmore Stadium on Tuesday night. The Tigers improved to 26-14 overall, while the Paladins dropped to 19-24 on the season.

The Tigers scored two runs in the first inning and three more in the third inning on Miller’s three-run homer. Both teams’ pitchers settled and kept batters at bay during the rest of the game, which lasted just two hours and 15 minutes.

Sarratt (4-1), the first of four Tiger pitchers, allowed only four singles, no runs, and no walks with five strikeouts in 6.0 innings pitched to earn the win. Will Lamb each pitched an inning to close out the game. The four hurlers and the errorless Tiger defense did not allow a single Paladin to advance past second base in the game, while only three advanced past first base. They also combined for seven strikeouts against no walks.

Kevin Gottlieb (0-2) suffered the loss in his first career start. He yielded five hits, five runs (four earned), and one walk with two strikeouts in 2.0 innings pitched. Stephen Gary pitched the final 6.0 innings, allowing only two hits, no runs, and two walks with one strikeout.

John Hinson led off the first inning with a single up the middle, stole second, and moved to third on Jeff Schaus’ grounder, allowing Miller to score.

The Paladins threatened to reach third base for the first time in the game in the eighth inning. Rob Fondu belted a one-out double to left-center and tried to stretch it into a triple. But the relay throw from Miller and tag by Hinson at third base was in time to retire Fondu.

Miller and Hinson had two hits apiece for the Tigers, who totaled seven hits in the contest. Hinson added two runs and a steal, while Miller totaled all four of the game’s RBIs, two runs, and a stolen base. Lamb extended his hitting streak to 15 games as well.

Fondu and Will Muzika had two hits apiece to pace Furman, who amassed six hits in the game.

Clemson will travel to Cullowhee, NC to take on Western Carolina on Wednesday at 6:00 PM.