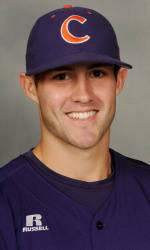 Brad Miller went 3-for-3 with a double, two RBIs, and two walks to lead #23 Clemson to a 6-4 win in eight innings over Western Carolina in front of 529 fans at Hennon Stadium on Wednesday night. Lightning halted play in the top of the ninth inning and the game was called less than an hour later. The Tigers, who won the home-and-home season series over the Catamounts 2-0, improved to 27-14 overall. Western Carolina fell to 17-21-1 on the season.

Haselden (4-1), the second of three Tiger pitchers, earned the win. He allowed three hits, no runs, and no walks in 2.2 innings pitched. Meyer struck out all three batters he faced in the eighth inning to record his first save of the season. The pitching staff was aided by three key double plays turned by the Tiger defense.

Morgan McKinney (0-1), the first of five Catamount hurlers, suffered the loss. He did not retire a batter and allowed two hits, three runs, and one walk. The five Western Carolina pitchers combined to strand 10 Tigers on base, including eight in scoring position.

In the first inning, John Hinson led off with a single through the right side and stole second. Phil Pohl followed with a walk as Hinson stole third. Miller laced a double down the left-field line to score Hinson and Pohl. After Miller stole third, he scored on a wild pitch.

In the top of the fifth inning, Miller lined a one-out single to center and scored on Will Lamb laced a two-out double to right field to plate Shaffer and give the Tigers a 5-0 lead.

The Catamounts responded with four runs in the bottom of the fifth inning. Cameron Dullnig led off with a single up the middle and went to third on Cody Jones’ double to right-center. Aaron Attaway’s groundout to second brought home Dullnig. After Macon Smith walked, Austin Schultz laid down a bunt to Shaffer at first, who threw home. But his throw was offline and Jones slid in safely on the sacrifice bunt. Ross Heffley followed with a single through the left side to load the bases, then Matt Johns lined a single to right field to score Smith. Stephen Notaro’s sacrifice fly to right field scored Schultz. The runs ended Clemson’s scoreless innings-pitched streak at 15 dating back to Sunday’s game against Wake Forest.

In the eighth inning, Chris Epps led off with a single down the right-field line and advanced to second on Jason Stolz’s sacrifice bunt. Hinson then ripped a one-hopper to Heffley at second, who could not make the play as Epps scored on the hard-hit single.

After Jeff Schaus led off the ninth inning with a double up the middle at 8:53 PM, lightning in the area forced a delay in the action. Less than an hour later, the game was called and the Tigers prevailed with the two-run victory. The game reverted to the end of the eighth inning, meaning Schaus’ two-bagger did not count.

Miller led Clemson’s 13-hit attack by reaching base in all five of his plate appearances along with two runs and a steal. Hinson, a native of nearby Asheville, NC, went 3-for-5 with an RBI and two steals, while Lamb went 2-for-4 with a double. Lamb also extended his hitting streak to 16 games.

Johns and Dullnig had two hits apiece to pace Western Carolina, who totaled seven hits in the contest.