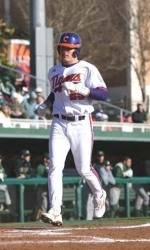 Kyle Parker’s two-run homer in the sixth inning gave the Tigers the lead as #22 Clemson posted a 4-1 victory over Wake Forest in the first game of a doubleheader at Doug Kingsmore Stadium on Friday.

The teams will play the second game of the doubleheader and three-game series on Friday afternoon at approximately 2:10 PM.

Tomas Cruz (2-1) recorded the win for the Tigers, who improved to 9-4 on the year and 2-2 in the ACC. The junior righthander pitched 3.0 scoreless innings in relief of Trey Delk, who struck out a career-high eight batters in 5.2 innings pitched. Will Lamb earned his first career save after coaxing a flyball out off the bat of Michael Murray to end the game.

Parker led Clemson with a trio of hits and three RBIs, while Jeff Schaus, John Nester each had two hits apiece for the Tigers, who outhit the Demon Deacons 14-8.

Shane Kroker had the only RBI for Wake Forest, who dropped to 7-6 overall and 0-4 in conference play. Carlos Lopez added a pair of hits and scored the Demon Deacons’ lone run.

Wake Forest got on the board first with a run in the sixth inning. Lopez hit a double down the left-field line and scored two batters later when Kroker slapped another two-bagger in nearly the same spot.

The Tigers responded in the bottom of the inning with three runs on five consecutive hits to take the lead. Schaus started the offense with an infield single. Parker followed with his first home run of the season, a two-run blast to centerfield, to put Clemson on top. Sanders then singled to left field and Lamb followed with a double to left-center. Nester added a run-scoring single before the inning ended.

Schaus again ignited a Clemson scoring rally with a double down the right-field line in the seventh inning. He then scored when Parker singled to left-center for Parker’s third hit and RBI of the game.

Wake Forest threatened in the ninth inning, as Kroker reached base on an error. Dustin Hood successfully bunted for a hit with two outs before Lamb came in to record the final out.