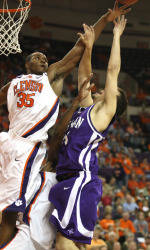 QUICK FACTS * Clemson is ranked in the national polls this week, the earliest the Tiger program has been ranked in a season since 1998-99. The Tigers are 22nd in the ESPN/USA Today coaches’ poll and 24th in the Associated Press poll. Clemson is ranked in both football and men’s basketball in the same week for the first time since November 18, 1996. * Clemson was 18-1 last year against non-conference teams, and is 4-0 so far this season. The Tiger program is 23-5 all-time versus schools currently in the Atlantic Sun Conference. * Clemson has a 22-1 record in the month of November under Oliver Purnell and has won 17 games in a row in the month. Clemson is 85-15 all-time in November. * Clemson and Gardner-Webb will be meeting for the third time in the series history this Saturday. The Tigers hold a 2-0 advantage over the Runnin’ Bulldogs. The two meetings were in consecutive seasons, 2002-03 and 2003-04. * The Tigers won the 2003-04 meeting by a score of 86-55, in Oliver Purnell’s first game as head coach at Clemson. Chris Hobbs posted 17 points and nine rebounds in the Tiger victory. * As a team, the Tigers lead the conference in steals (14.75 per game) and offensive rebounding (18 per game). Clemson ranks second in the ACC in turnover margin (+8.5). * Clemson has forced 101 turnovers through four games this season, an average of over 25 per game. The Tigers forced Furman into 37 turnovers in the season opener. * The Tigers are shooting 37 percent from three-point range and 71 percent from the free throw line through four games. * Cliff Hammonds leads the ACC in assist-to-turnover ratio with a 4:1 figure. He was second in the league in the category last season as a junior. * Trevor Booker moved into 10th place on Clemson’s all-time blocked shots list after just 40 career games. He has 90 for his career, two more than Raymond Jones had from 1980-85. He needs just three to pass Akin Akingbala for ninth place. * K.C. Rivers ranks among the ACC leaders in three-point accuracy and three-point goals per game. He is fourth in accuracy (55 percent) and fifth with 2.75 made per game. He leads the Tigers in scoring again this season. * James Mays ranks second in the ACC in steals per game. He is averaging 3.3 per game and now ranks 13th on the school’s all-time steals list with 129. He needs just three to pass Edward Scott for 12th place on the list. Mays also ranks second in the ACC in offensive rebounds per game.