It is hard to believe that four years can pass so quickly, but that is the case with the 2020-21 men’s basketball senior class. Both Aamir Simms and Clyde Trapp came to Tigertown as freshmen in the fall of 2017 and will leave having left their own paw print on the direction of the program as it embarks on a new decade.

As freshmen, Simms and Trapp were a part of just the fourth Sweet 16 run in Clemson history. Their experience and play that season helped set them up as current leaders of the program as they enter their senior campaigns.

Simms came on strong during the last half of the 2017-18 season, filling in for injured star forward Donte Grantham, and has excelled in his role, both on and off the court, ever since. Simms has improved every year and is poised to make this his best season on the hardwood.

Trapp served as the backup point guard to veteran Shelton Mitchell during his first two seasons in Clemson, but adversity struck the summer before his junior campaign. One day before the Tigers were to travel overseas to Italy for the 2019 World University Games, Trapp tore his ACL and joined Jonathan Baehre, the Tigers’ third senior this season, rehabbing to return to the court.

Baehre originally joined the Tigers during the spring of 2018 after transferring from UNC Asheville, but he was forced to sit out the season due to NCAA transfer rules. Baehre faced more adversity, suffering two torn ACLs during the last two years. He is working to play a full 2020-21 season.

Leadership is an important intangible for the Tigers as they head into an optimistic 2020-21 season, and these three seniors are the foundation of that.

“Aamir Simms is one of the best leaders I have had,” said Head Coach Brad Brownell. “He has seen leaders like Donte Grantham and Gabe DeVoe before him. He knows what good leadership looks like. Clyde Trapp is also healthy, and he will provide leadership.” 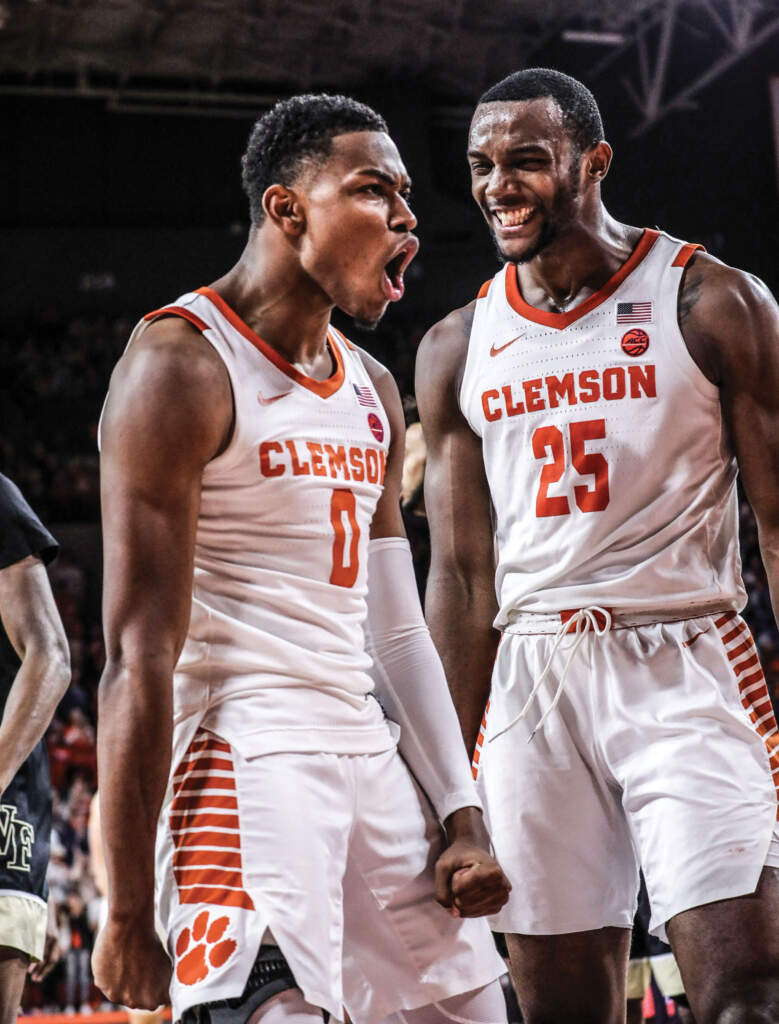 As freshmen on a team that went to the Sweet 16, Simms and Trapp absorbed extra leadership qualities, not just from the coaching staff, but from the team leaders that season.

“I had the luxury as a freshman to have Donte, Eli (Thomas), Gabe, Marcquise (Reed) and Shelton as my leaders,” said Simms. “Going into my senior year, now being in their shoes, I try and take that same approach that they had. I understand that these guys are young and I was once in their shoes.

“I always try and approach it with a positive mindset and push guys one step at a time. I try to lead by example with what the culture here represents and how we want to move going forward.”

“I have always been in a leadership role,” said Trapp. “Even when I was younger playing multiple sports, everyone followed and looked up to me. I’ve tried to lead by example, and I believe that can rub off on the younger guys.”

Acclimating to a new team can be different as a veteran, especially when dealt some injury setbacks. That was the case for Baehre.

“Sitting out with my injury…it was me and Clyde at the same time. It really gives you a different perspective on basketball. You see it more from a coaching perspective. I learned from our coaches about leadership and how to become an energy giver. It also showed me how to effectively lead teammates.”

“I gained a new appreciation. Now that I am back, the joy of playing basketball is back. My energy is high, and I’m having fun out there with my teammates.”

The culture of Clemson men’s basketball is strong within the locker room, and it is no coincidence that it starts with the three seniors.