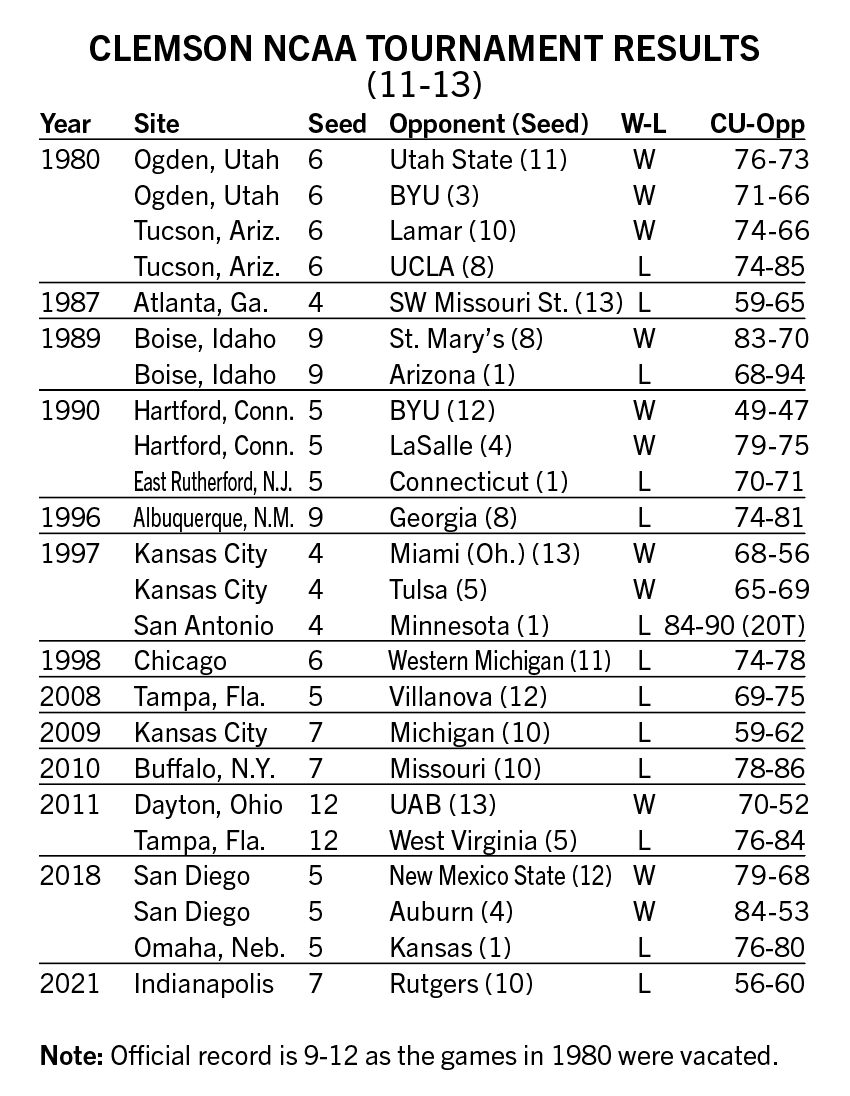 Brad Brownell has taken three different schools to the NCAA Tournament, UNC Wilmington (twice), Wright State (once) and Clemson (now twice). He has posted a 3-6 record, with two victories coming in 2018 when Clemson made a run to the Sweet 16. 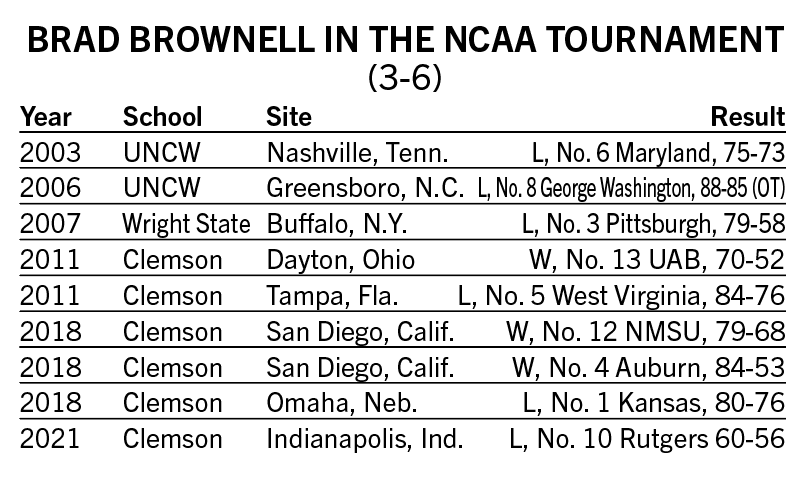 With a 10-6 record, Clemson finished the season in a tie for fifth place in the ACC standings entering games. The Tigers were picked 10th in the preseason vote by the Atlantic Coast Conference Media – a five-place improvement over the preseason prediction. 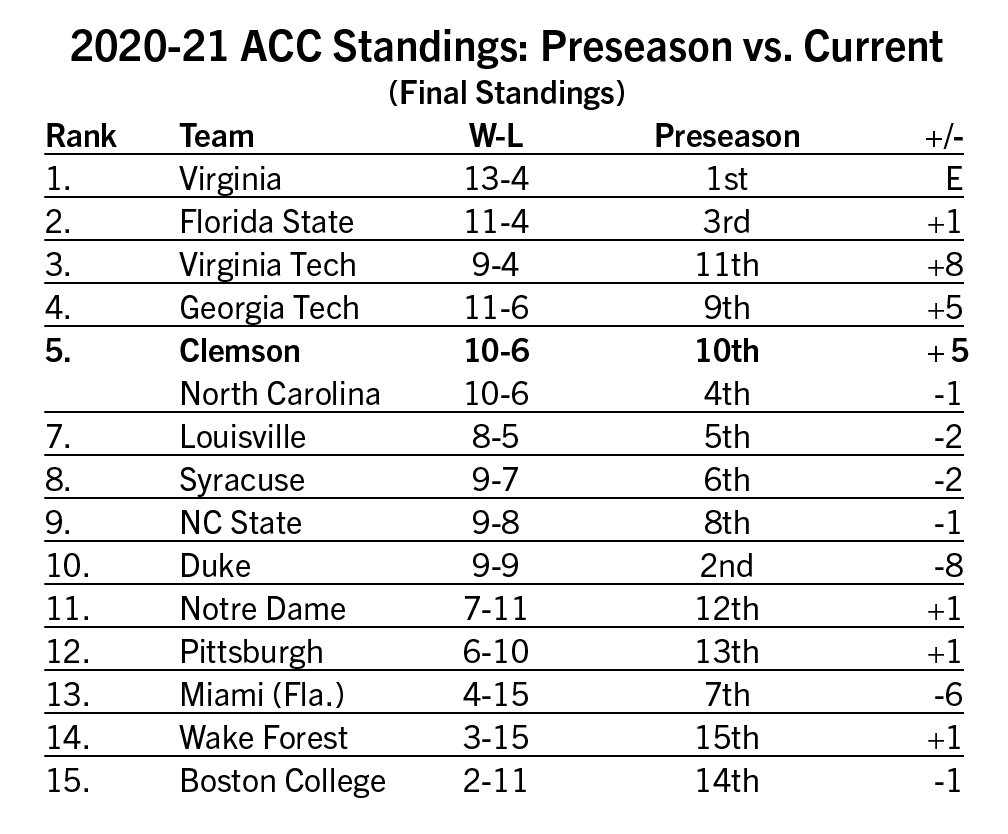 Brownell’s teams have finished equal to or better than its preseason prediction by the ACC media in seven-of-his-previous 10 years.  That includes a 10-place improvement in 2017-18 when the Tigers were picked 13th in the preseason and finished third.

That is the all-time record improvement in ACC history from the preseason to the postseason. That team also reached the Sweet 16 of the NCAA Tournament and Brownell was named the National College Coach of the Year by Sports Illustrated.

As you can see by the chart below, his 2013-14 finished eighth spots ahead of its prediction and the 2015-16 team was five spots better. 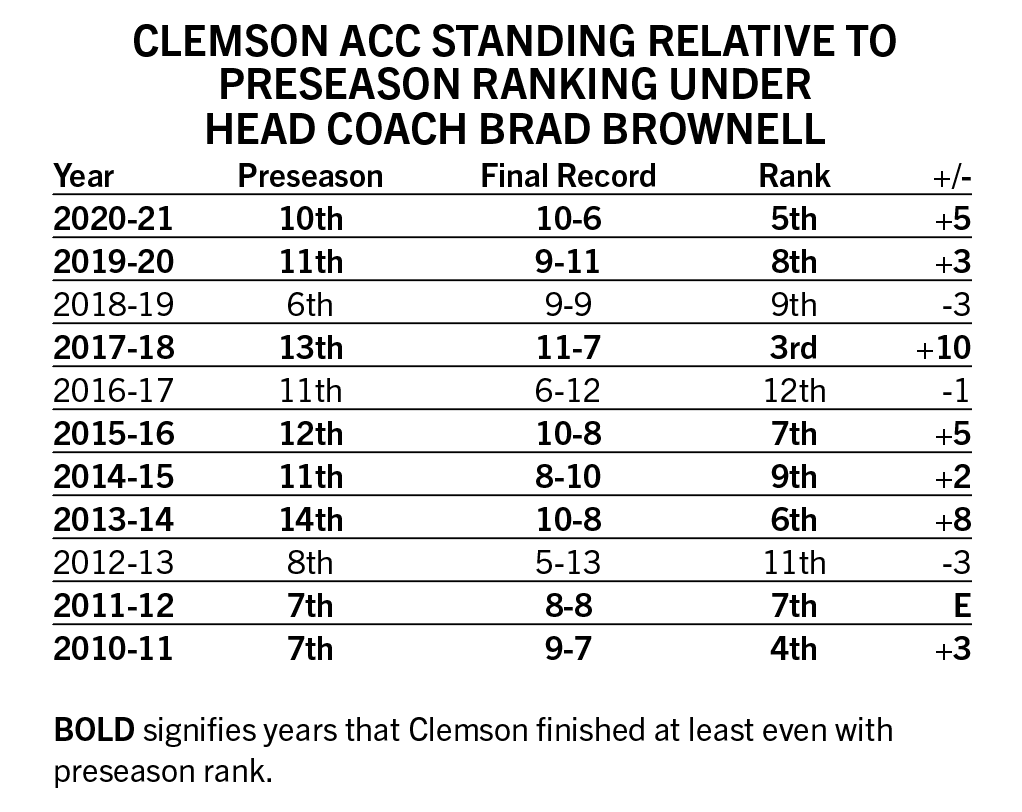 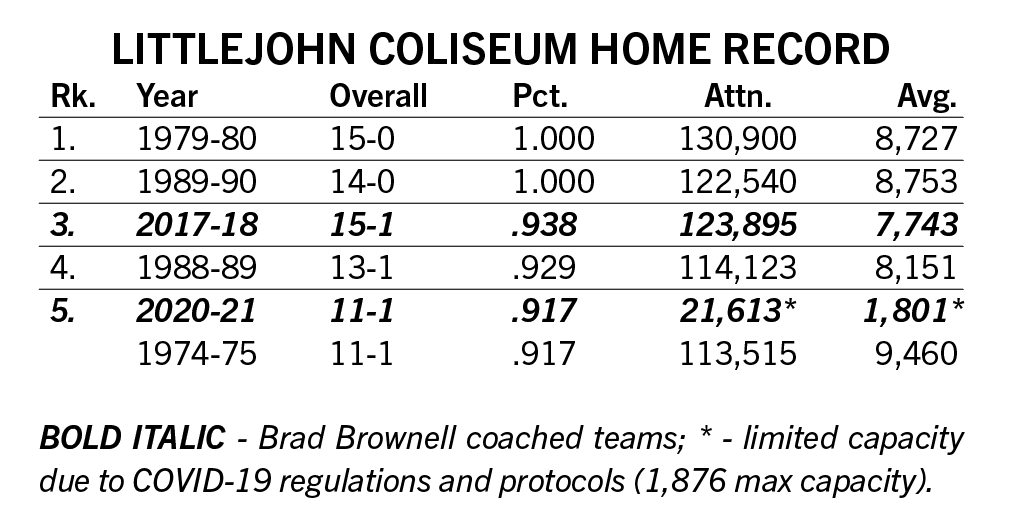 Head Coach Brad Brownell has two seasons in the top five all-time in Littlejohn Coliseum history, which dates back to the 1968-69 season.

In a COVID-19 year, the Tigers limited their attendance to 1,876 per home game. Clemson finished with 21,613 for the season in 12 home contests. That figure finished the regular season good for 19th in the country.

With a 77-62 win over Pittsburgh (March 6), the Tigers clinched its seventh season of winning at least 10 ACC games. Head Coach Brad Brownell has coached four of the teams that have secured double-digit ACC victories.

CLEMSON FINISHES WITH A TOP-6 SCORING DEFENSE IN ITS HISTORY

Clemson’s defense this season was otherworldly at times as they utilized their depth to pick teams up in the full court. Head Coach Brad Brownell is known for his meticulous tactics defensively, and it’s a reason why of all full seasons played during the ACC Era, Brownell’s teams are prevalent.

The scoring defense this season (61.9) finished second in the ACC and 12th in the nation. 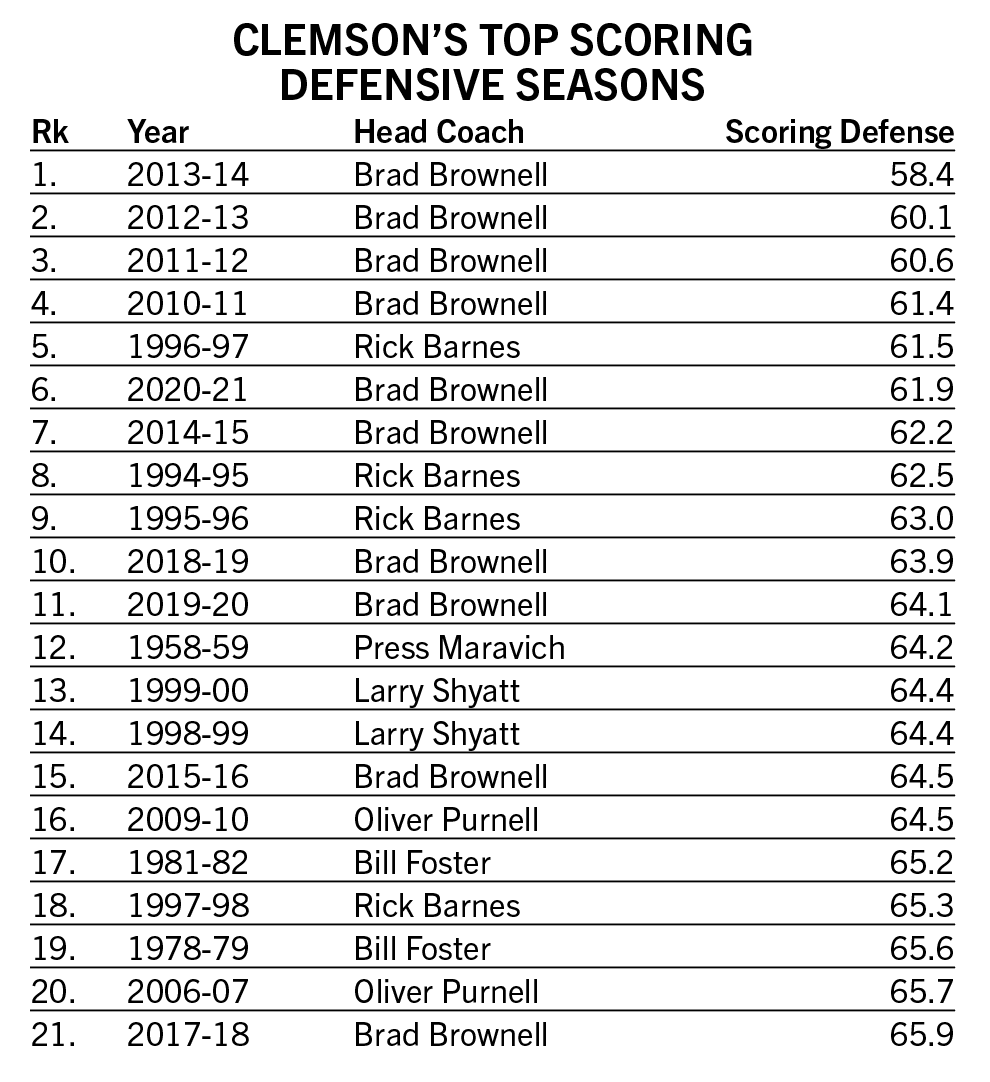 Clemson has already recorded four wins this season over programs that are ranked in the top 15 in college basketball history in overall wins, winning percentage or both.

Clemson has defeated North Carolina 63-50 and the Tar Heels are second in NCAA Division I history in winning percentage and third in total wins. Clemson also has a 17-point win over Syracuse, a program that is sixth in overall wins and seventh in percentage.

Clemson’s second win this season was also a double digit triumph over Purdue when the Tigers won the Space Coast Challenge in Melbourne, Fla. The Boilermakers are 14th in overall wins and 25th in winning percentage.

Louisville is 11th in NCAA history in winning percentage and 26th (soon to be 25th as it will soon pass Princeton, who is not playing this year) in total wins.

Clemson had a chance for a fifth win over a top 15 program until its game at Notre Dame on Feb. 17th was postponed.

In Brad Brownell’s tenure as head coach at Clemson, the Tigers are a combined 50-2 when they allow 50 or less points to its opponent. The Tigers have won their last 29 contests in which they have allowed 50 or less points (29-0). 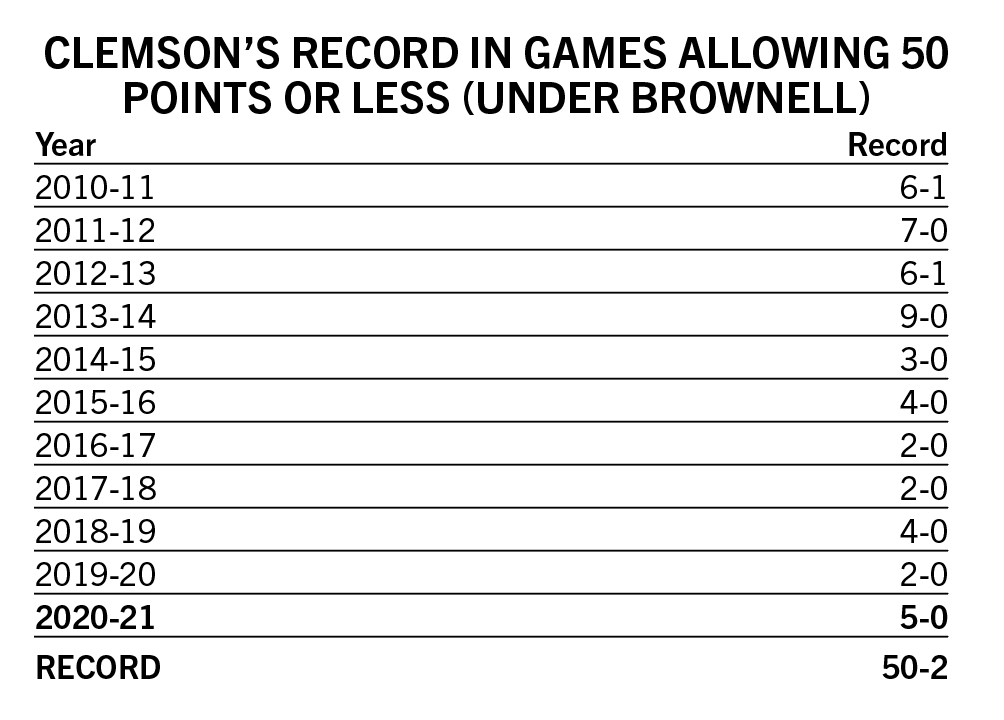 Taking it one step further, Clemson has allowed 40 points or less on 10 occasions during Brownell’s tenure as head coach. The Tigers did this twice in 2020-21, holding SC State to 38 points and Wake Forest to 39 points. 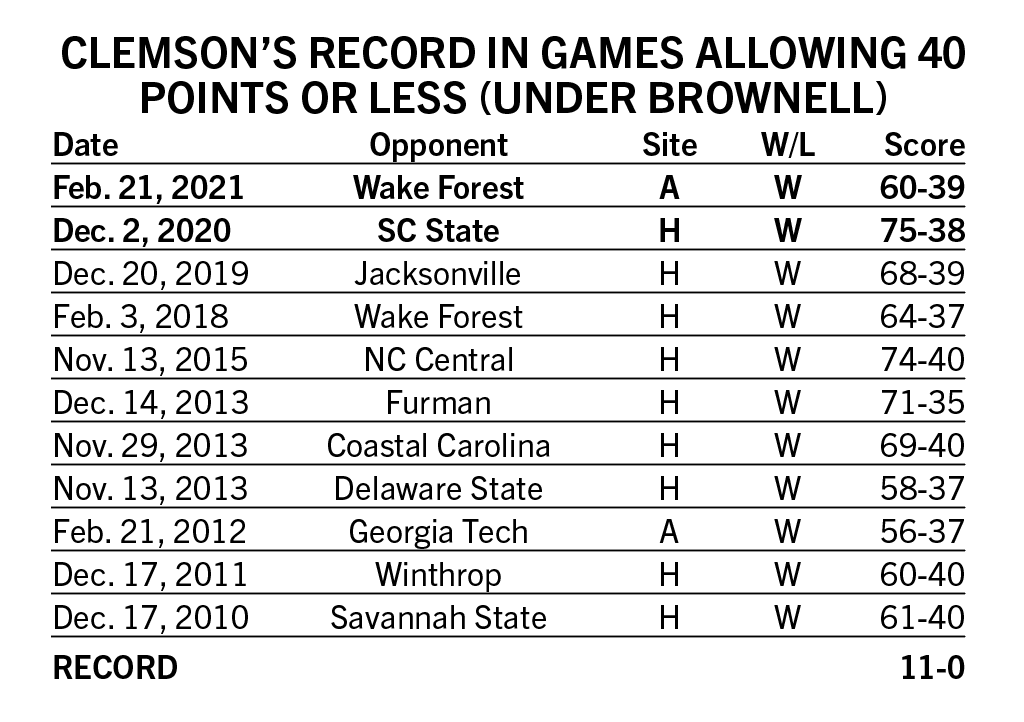 EIGHT WINS OVER NCAA TOURNAMENT TEAMS IS A PROGRAM BEST

Even though Clemson’s season was limited to 23 games due to COVID19, Clemson has defeated eight teams that are in the NCAA Tournament, tied for the most in one year in program history. 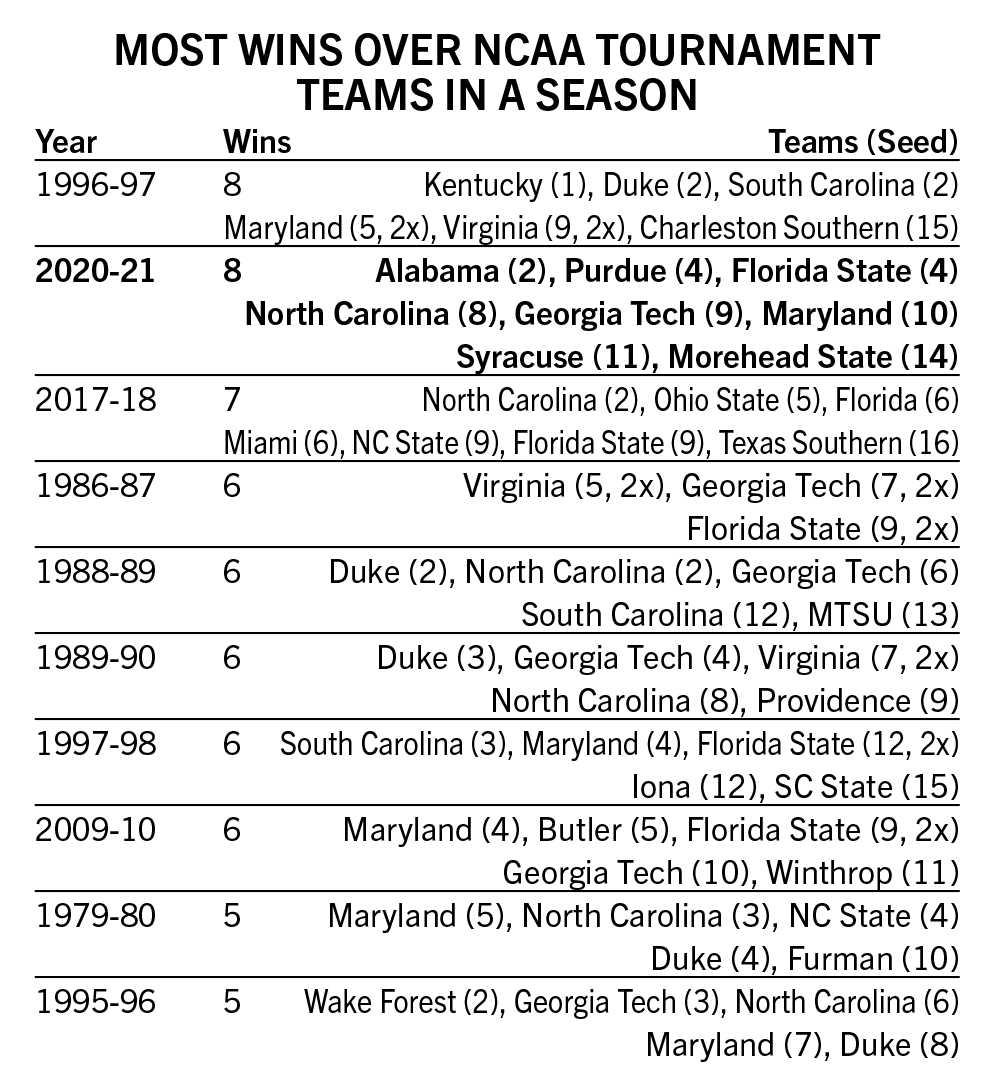 The 1996-97 Clemson team under Rick Barnes had eight wins over NCAA tourney teams, while Brad Brownell’s 2017-18 team had seven.  Both of those teams reached the Sweet 16 of the NCAAs.

Clemson is ranked 41st in the NET as of March 26, 2021. Clemson has a 16-8 overall record, 10-6 in the ACC. The Tigers have four non-conference wins over Power 5 Conference teams, the only ACC team that can make that claim.

The Tigers are 4-2 against teams listed in the top 16. 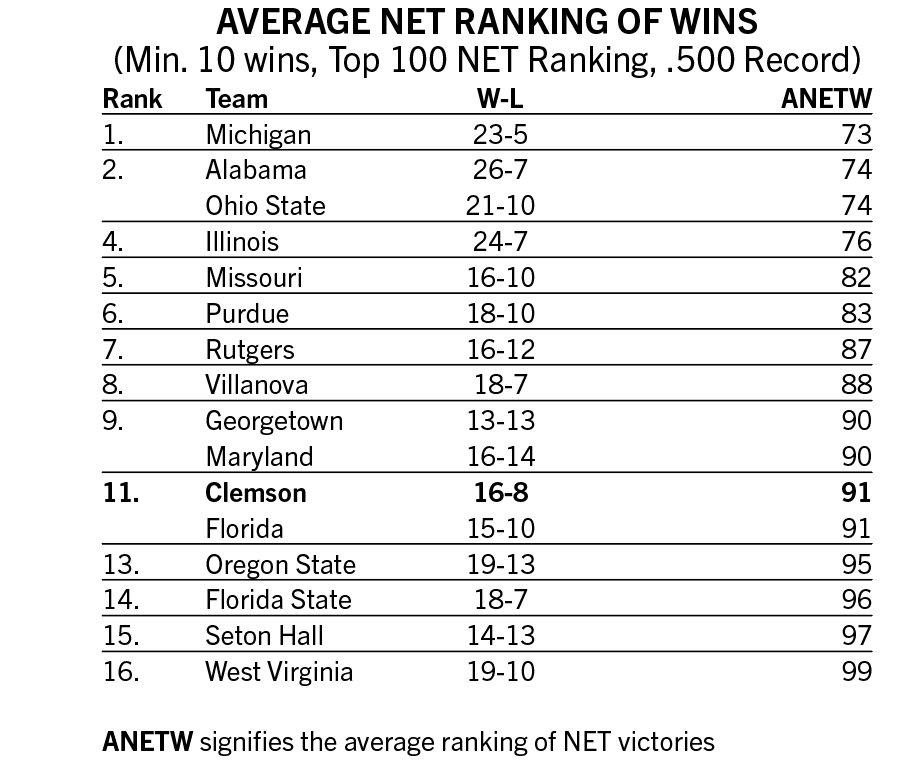 Clemson has overcome a halftime deficit to win five times this season, including in three consecutive games earlier in the year. 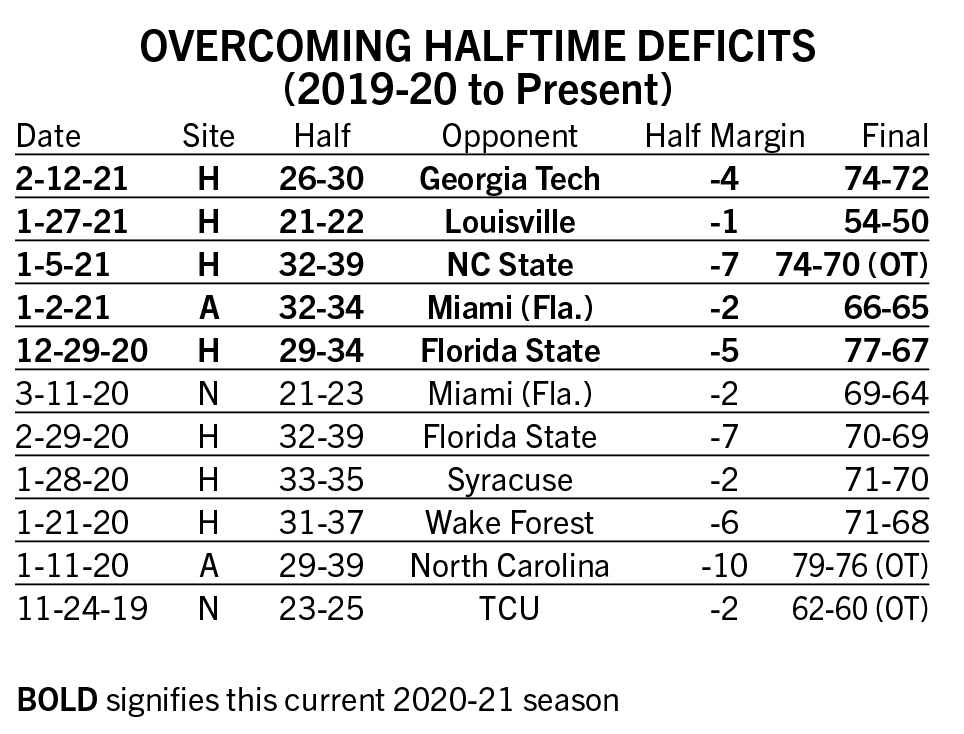 The Tigers trailed Georgia Tech 30-26 at the half before exploding for 48 second-half points and winning the game on a Nick Honor buzzer-beating 3-pointer.

The Tigers trailed by seven to NC State at home on Jan. 5, but were able to overcome the halftime deficit and force overtime.

In Clemson’s first overtime game this season, the Tigers prevailed 12-8 in the extra period for a 74-70 win.

Last season, the Tigers overcame six games with a halftime deficit and won, which ties the program record.

Clemson rolled by Wake Forest en route to a 21-point victory, 60-39, on Feb. 24. It marked the first double-digit ACC road win of the season for the Tigers and the 10th under Head Coach Brad Brownell. The 21-point road victory margin is the second-best during the Brownell Era. Only a 23-point win at Georgia Tech in the 2018-19 season is better. 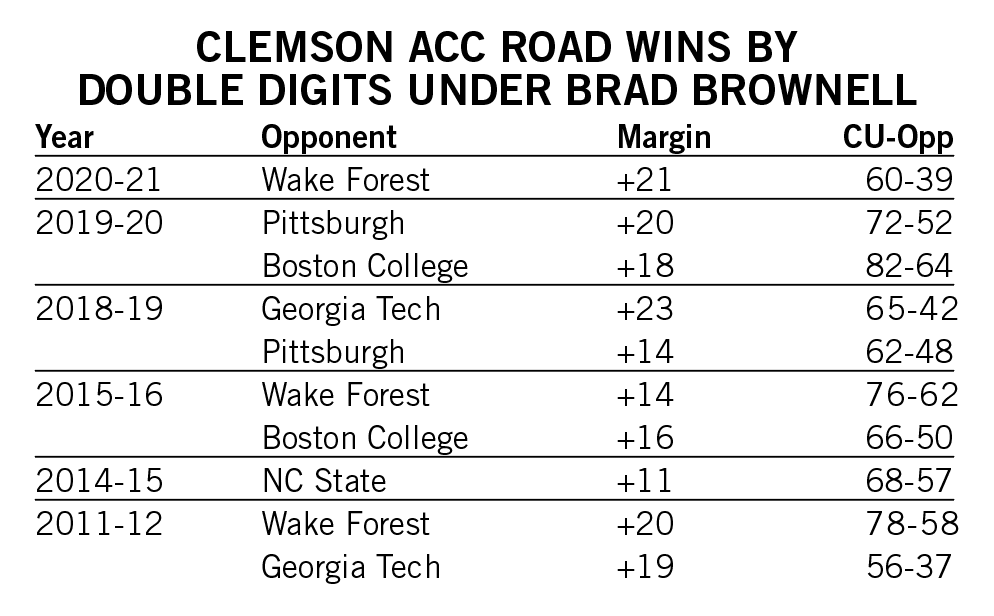 The game at Wake Forest marked just the third time during that 41 season stretch that the Tigers have held an ACC team to 12 or fewer field goals. The 12 made field goals is tied for the second-fewest Wake Forest has made in a game in their history. 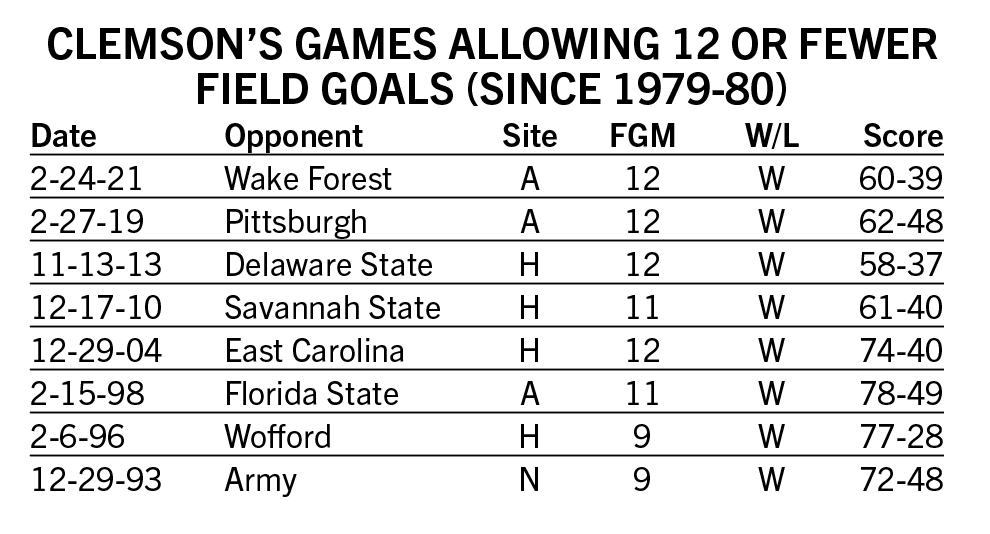 Allowing just 39 points to Wake Forest on the road was the second-fewest allowed by Clemson in an ACC road game in history. The Tigers held Georgia Tech to just 37 in a 64-37 win on Feb. 21, 2012.

The Tigers have held eight teams to less than 15 points in a single half, including five during the first 20 minutes of play. Clemson accomplished this twice in 2020-21, holding both Maryland and Wake Forest to 15 points in the first half. 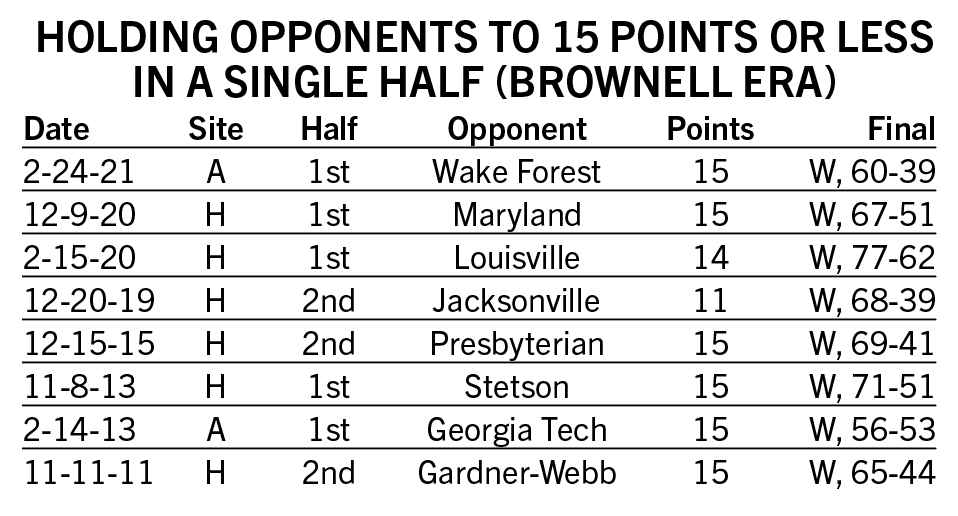 Clemson accomplished something the program has not done since the 1951-52 season when the Tigers won the Space Coast Challenge on Thanksgiving Day. The Tigers opened the season by beating Mississippi State and Purdue on consecutive days by 11 points each to win the championship.

It marked the first time since 1951-52 and just the third time in the history of the program that Clemson opened its season with consecutive wins over teams from Power Five Conference schools.

Clemson went on to a 17-7 record that year, its finest under McFadden, and won a then-record 11 Southern Conference games.

The only other year Clemson accomplished the feat was 1934-35 when the Tigers opened by winning consecutive games in consecutive days at Auburn. That Clemson team went on to a 15-3 record, the best winning percentage in Clemson history (min 15 games). 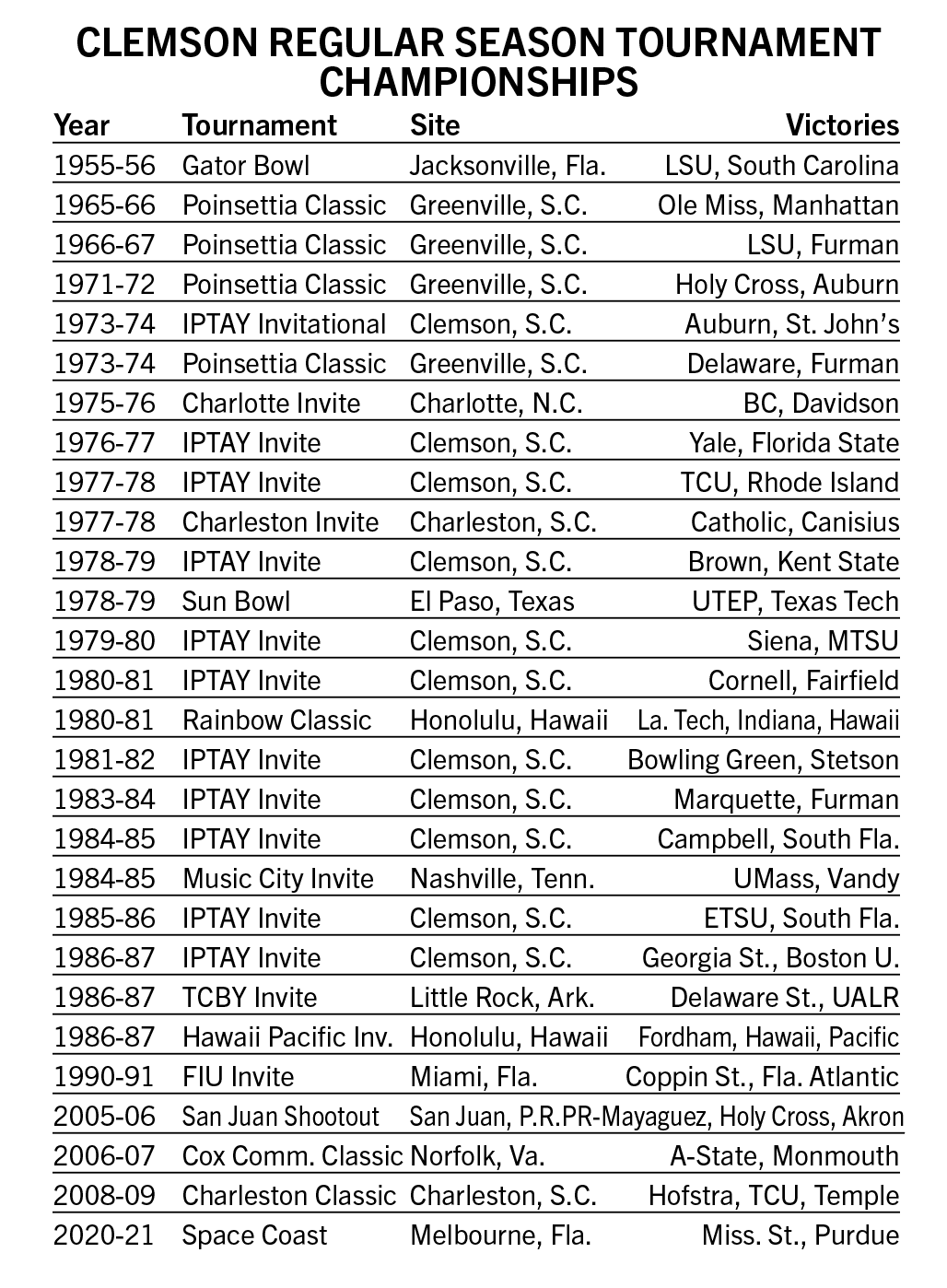