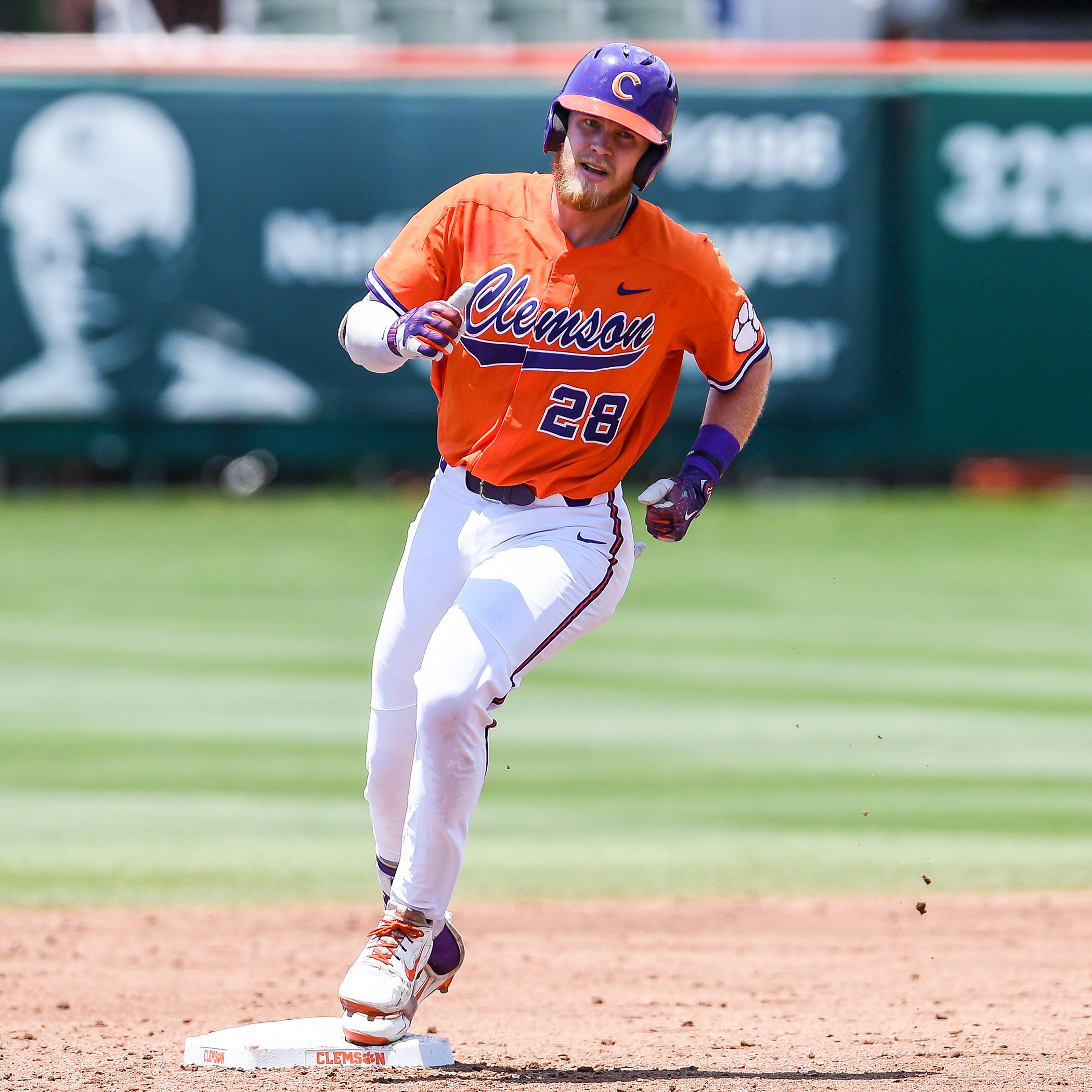 In many ways, the 2018 team was Clemson’s best since 2006. The Tigers again fell short in the Clemson Regional, but the list of accomplishments is a lengthy one.

Led by third-year head coach Monte Lee, Clemson totaled 47 overall wins, 22 ACC regular-season victories, a share of the ACC regular-season title and an outright ACC Atlantic Division championship. Those four achievements were all firsts for the program since 2006.

Clemson had a 24-9 record against ACC teams, the best mark of any ACC team, won eight of 10 ACC series, won all five ACC road series for the first time in history, won its final 11 ACC road games and recorded three ACC road sweeps for the first time since 1995. The Tigers also won 12 of their last 13 ACC regular-season games a had a 15-5 overall road record. The Tigers set school records for one-run wins (16), fielding percentage (.975) and average home attendance (4,984) as well.

Clemson, who was ranked in the top 25 of every poll for the second year in a row and finished ranked as high as No. 12 by Perfect Game, featured a power-hitting lineup that finished tied for third in the nation in homers with 98, third most in Tiger history. Seth Beer led the team and was fifth in the nation in home runs (22), while Chris Williams (18), Logan Davidson (15), Grayson Byrd (9), Patrick Cromwell (7) and Drew Wharton (7) all had at least seven long balls. The Tigers also had a .451 slugging percentage and .379 on-base percentage.

Leading the way at the plate was Beer, who was a first-team All-American in 2018 and became only the second three-time All-American in Clemson history. Beer, also a First-Team All-ACC selection, hit .301 with an ACC-high 22 homers, 11 doubles, 54 RBIs, 64 runs, a .642 slugging percentage and .456 on-base percentage. Davidson was a third-team All-American and Second-Team All-ACC shortstop who batted .292 with 15 homers, 18 doubles, 46 RBIs, 60 runs, a .408 on-base percentage and 10 steals as well as an outstanding .971 fielding percentage.

Two other Tigers put up strong offensive numbers. Kyle Wilkie, a Third-Team All-ACC catcher, hit a team-high .324 with five homers, 40 RBIs and a .422 on-base percentage. He ended the season on a 29-game hitting streak and 39 on-base streak, and he only allowed 26 steals in 42 attempts while serving as the catcher in almost every game. Williams, a Third-Team All-ACC first baseman, hit .281 with 18 homers, 12 doubles, an ACC-high 72 RBIs, 54 runs and a .401 on-base percentage. Despite battling an injury during the second half of the season, Byrd earned Third-Team All-ACC honors as well.

Every pitcher who started a game on the mound in 2017 did not return in 2018, but the pitching staff was very consistent. Clemson had a 3.65 ERA, .239 opponents’ batting average and 21 saves, tied for second most in school history.

The bullpen was the strongest component of the pitching staff, led by second-team All-America closer Ryley Gilliam. The First-Team All-ACC selection had 11 saves, tied for third most in Tiger history, along with a 1.41 ERA, 165 opponents’ batting average and 54 strikeouts in 38.1 innings pitched over 27 relief appearances.

Clemson featured the same three starting pitchers for almost every weekend in 2018. Brooks Crawford was 8-2 with a 3.24 ERA, .234 opponents’ batting average and 58 strikeouts against only 18 walks in a team-high 80.2 innings pitched over 16 starts. The Tigers were 14-2 in his 16 starts, while his six wins in ACC regular-season games led all league hurlers.

The Tigers, who were seventh in the nation in wins, opened the season with three one-run home wins over William & Mary, marking the first time in school history Clemson won all three games of a series by one run. In the opener, Clemson trailed 4-1 with two outs and the bases empty before rallying for a win on Williams’ walkoff single in the 10th inning.

The following weekend, Clemson hosted No. 10 Dallas Baptist and swept the Patriots by a combined score of 24-4, then Wilkie hit a walkoff single in the 10th inning in the Tigers’ 9-8 win over Winthrop.

Clemson played its annual series against No. 23 South Carolina, and for the fourth year in a row, the Tigers won the series 2-1. After falling in Columbia 3-2 in game one, Clemson responded with back-to-back wins, including an 8-7 win at Doug Kingsmore Stadium in the finale on Wharton’s walkoff triple. Those two victories were the first of Clemson’s eight-game winning streak, one of four by the Tigers in 2018.

After midweek wins over Wofford and Michigan State, where the Tigers rallied from a 6-0 deficit with nine runs in the fifth inning in their 9-7 victory at Fluor Field in Greenville, S.C., Clemson began ACC play with a three-game home sweep of Georgia Tech by a combined score of 23-7. The Tigers then upped their season record to 16-1 with a 5-0 home win over Charleston Southern, as Byrd tied a school record with three home runs.

Clemson won two of three games at Notre Dame in frigid temperatures in early April, but the Tigers suffered a loss against No. 10 Georgia at North Augusta, S.C., two losses in three home games against Miami (Fla.), including losing an eight-run lead in the ninth inning in game one, and a loss at No. 12 Georgia.

But Clemson turned the tide and the bats came alive during the rest of the season. It started with a three-game sweep at Wake Forest, two midweek home wins and another three-game road sweep, this time at Virginia. All three games were one-run victories at Charlottesville, Va., marking the second time during the season and in history the Tigers swept a series with three one-run wins. Gilliam also became the first Tiger in history with a save in all three games of a series.

After five days off for final exams, Clemson suffered a heartbreaking 3-2 loss in 13 innings against a top-15 Florida State team. But Clemson won its biggest series of the year with a 12-7 win in game two and a 5-4 victory in game three on Jordan Greene’s walkoff homer, the first by a Tiger since 2016.

After Clemson went 4-1 in five combined non-conference games against Western Carolina, Austin Peay and Kennesaw State, the Tigers ended the regular season with a three-game sweep at Pittsburgh. In the first game, Clemson hit six home runs, including two each by Davidson and Cromwell. Davidson, a switch-hitter, also became the first Tiger in history to hit a home run from both sides of the plate in one game. With its 4-1 win in the regular-season finale, Clemson tied North Carolina for the best ACC regular-season record in 2018.

The Tigers took care of business of Notre Dame and Miami in the ACC Tournament to advance to the semifinal round. Against the Fighting Irish, the Tigers set an ACC Tournament record for runs in an inning with 17 in the fourth inning. It was also the third-most runs in an inning in school history and their most since 1998. Clemson hit four home runs in the frame as well. Not only did Davidson hit a homer from both sides of the plate for the second time in Tiger history six days after doing it the first time, he did it in the fourth inning.

No. 7 Florida State edged Clemson 5-4 to eliminate the Tigers from the ACC Tournament, then Clemson was awarded a regional host for the 16th time in history and third year in a row.

Clemson downed Morehead State 4-3 in its regional opener on Greene’s walkoff single in the 10th inning, the Tigers’ sixth walkoff hit of the season, but Vanderbilt held on to defeat the Tigers 4-3 in the winners’ bracket. After a 9-8 win over St. John’s, the Commodores eliminated Clemson on its home field for the second year in a row. Miller, Wharton, Wilkie and Williams were named to the Clemson Regional All-Tournament team.

Seven Tigers were selected in the MLB draft after the season, tied for 13th most in the nation. Beer became Clemson’s first first-round draft pick since 2012 when he was selected by the Houston Astros. Gilliam (fifth round), Miller (sixth round), Williams (eighth round), Higginbotham (11th round), Wharton (30th round) and Mitchell Miller (31st round) were also chosen in the draft.