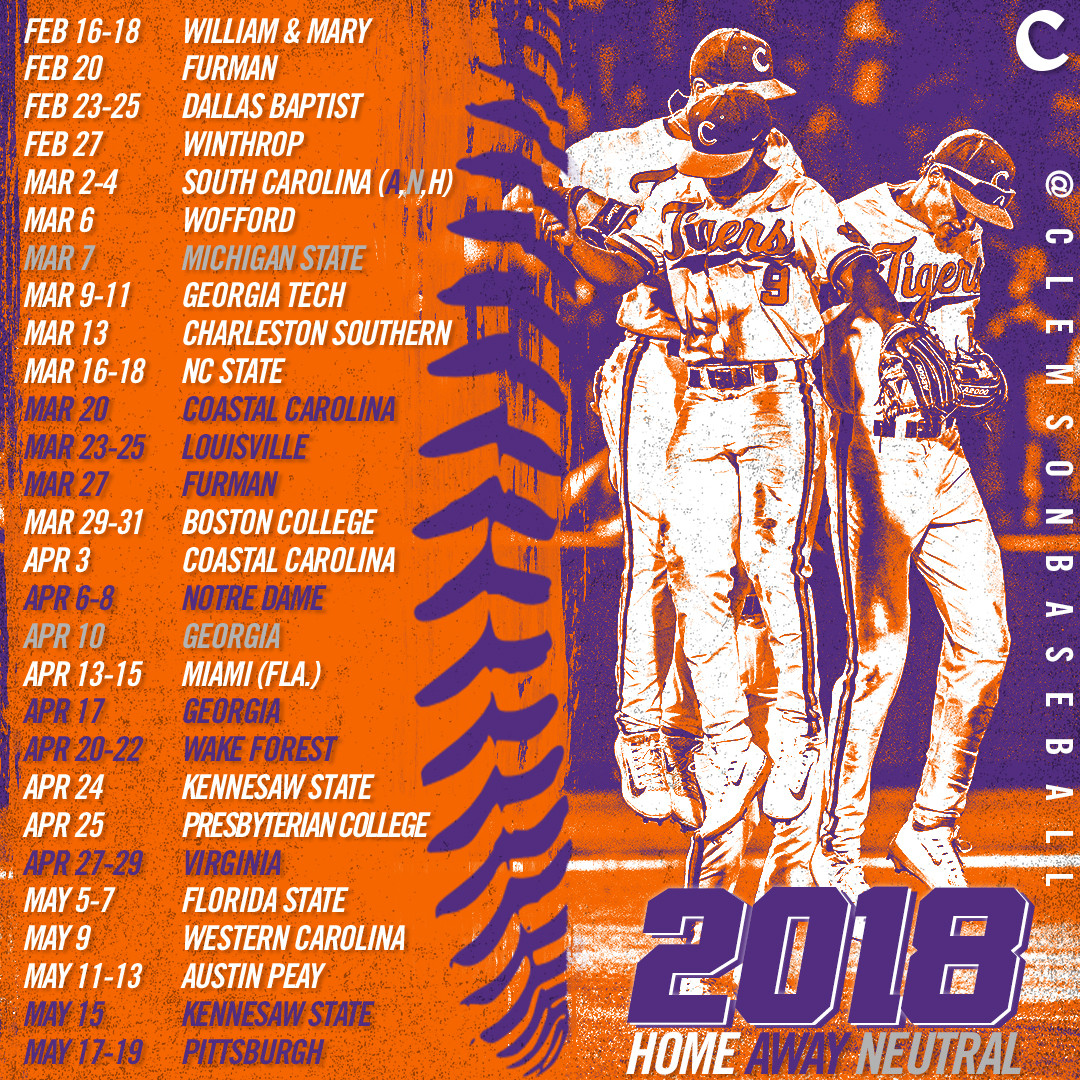 CLEMSON, S.C. – The 2018 Tiger baseball schedule features 33 home games, three games at Fluor Field in Greenville, S.C., and a game against Georgia at North Augusta, S.C. Clemson’s 56-game schedule begins February 16 at 4 p.m., with the first of three games against William & Mary at Doug Kingsmore Stadium. All game times for the 2018 season are subject to change.

The Tigers then face South Carolina three times at three different sites. The Tigers travel to Columbia to play the Gamecocks on March 2 to open the series in the 316th all-time meeting, then the two match up at Fluor Field the following day. On March 4, the series concludes at Doug Kingsmore Stadium. The Saturday contest at Fluor Field marks the seventh time in eight years the two rivals play at Fluor Field for their neutral-site game.

After hosting Wofford on March 6, the Tigers return to Fluor Field, home of the Greenville Drive, to play Michigan State the following night. Clemson then opens its ACC slate with back-to-back home series against Georgia Tech and NC State with a midweek game against Charleston Southern in between.

Clemson hits the road during Spring Break with a midweek contest at Coastal Carolina on March 20 before traveling north to face Louisville from March 23-25. Clemson returns to Fluor Field for the third and final time to play Furman on March 27.

Boston College comes to town for a three-game series from March 29-31, as the Tigers are off on April 1 for Easter, then they host Coastal Carolina in a midweek contest before traveling to Notre Dame.

Clemson plays Georgia in the first of two games against the Bulldogs on April 10 at SRP Park in North Augusta, S.C., home of the Augusta GreenJackets. It is the inaugural baseball event at the new stadium. After hosting Miami (Fla.) from April 13-15, the Tigers travel to Athens to take on Georgia.

The Tigers go on the road on consecutive weekends to face Wake Forest and Virginia in late April, with home midweek games against Kennesaw State and Presbyterian College in between.

After taking five days off for final exams, Clemson hosts Florida State in the first three of seven straight home games, followed by a midweek game against Western Carolina and a three-game series against Austin Peay, a team the Tigers have faced only once (1973).

During the final week of the regular season, the Tigers play a midweek game at Kennesaw State before traveling to Pittsburgh to face the Panthers from May 17-19.

Twelve teams will participate in the ACC Tournament at Durham (N.C.) Bulls Athletic Park from May 22-27. The format, in its second year, features four pools with three teams in each pool. Pool play takes place on Tuesday, Wednesday, Thursday and Friday, with three games per day. Each pool plays a round robin, with the top team advancing to the semifinals. The semifinals take place on Saturday, followed by the championship game on Sunday.