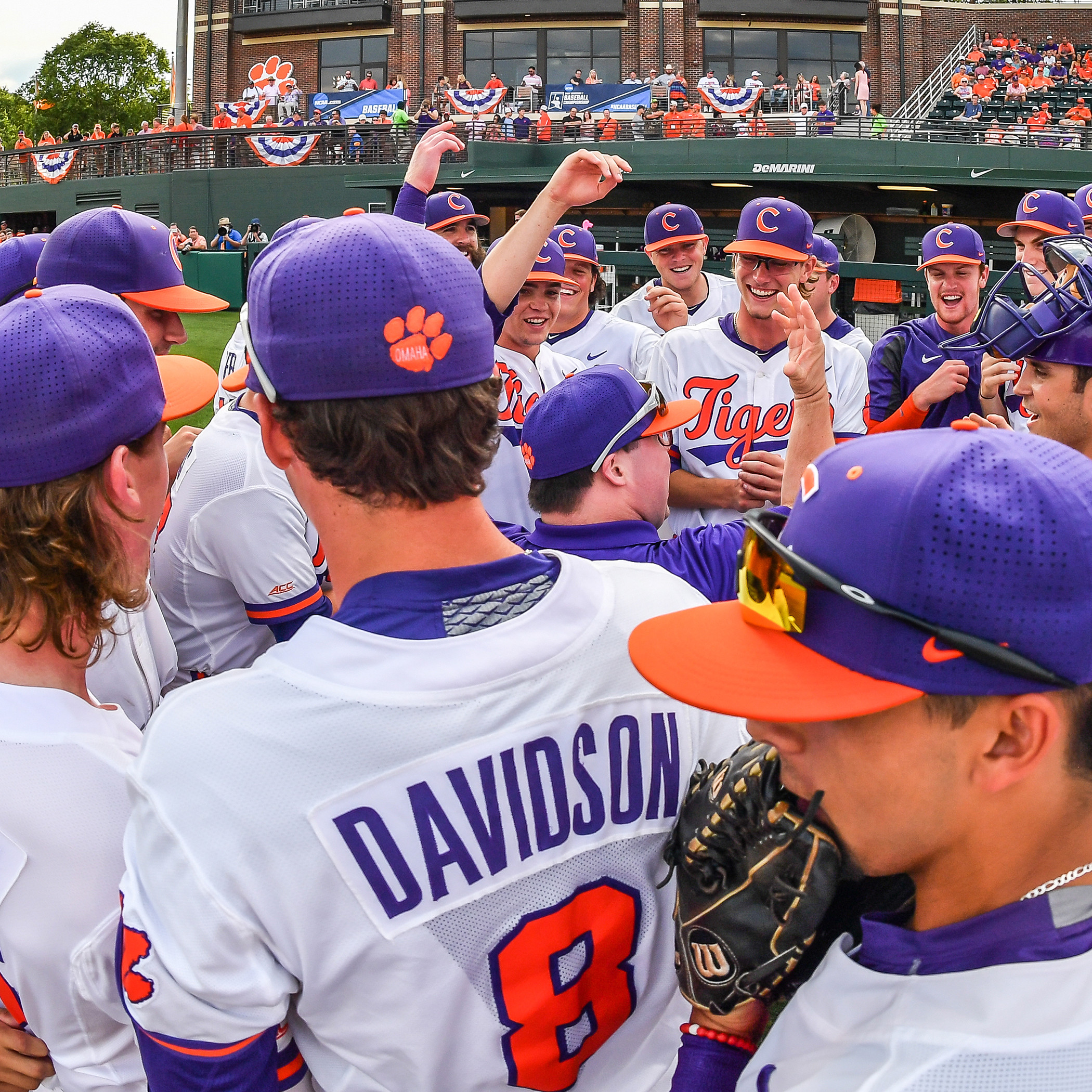 In Monte Lee’s second season as head coach at Clemson in 2017, the Tigers hosted a regional for the second year in a row and totaled 42 wins. It marked the first time Clemson amassed 40+ victories in back-to-back years since 2010,11.

Clemson started the season on a tear with a 30-5 overall record, 14-2 ACC mark and top-five ranking. However, the Tigers faced their toughest opponents late in the season, including No. 17 Wake Forest, No. 3 North Carolina and No. 2 Louisville, and finished with a 42-21 overall record, 17-13 ACC regular-season mark and top-25 final ranking, including a high mark of No. 22 in the USA Today poll. The Tigers hosted a regional for the 15th time in school history, as they recorded their most wins (3) in an NCAA Tournament since 2010.

A key factor in Clemson’s success was its 14-0 record in midweek games and 22-4 mark in regular-season non-conference contests. The Tigers had nine shutout victories, third most in school history and most since 1996. Clemson also capped their winning streak in games away from home at a school-record 16 games, a streak that started in 2016.

The Tigers had a .282 batting average, .446 slugging percentage and .381 on-base percentage thanks to 302 walks and 60 hit-by-pitches. Clemson slugged 73 home runs, including double digits by Seth Beer (16), Chris Williams (14) and Logan Davidson (12). The Tigers also had a .970 fielding percentage, their best mark since 2013, and allowed just 34 steals in 60 attempts, good for an outstanding 43-percent caught stealing rate.

The unquestioned team leader was graduate Andrew Cox, who had his best season as a Tiger in 2017. He hit .280 with six homers, 35 RBIs and countless run-saving defensive plays at first base. Davidson, a first-team freshman All-American, hit .286 with 12 homers, 41 RBIs, 42 walks and 10 steals, as he became the first Tiger shortstop with double-digit home runs since 2007.

The Tigers were set back by two Chris Williams injuries, one at the beginning of the year and one at the end, that were instrumental in Clemson’s struggles. Williams amassed 14 doubles, 14 homers and 51 RBIs in only 49 games (42 starts). The Tigers were 28-8 when he started at catcher and only 14-13 when he did not start at catcher.

The pitching staff was one of the most consistent areas of the team. The weekend rotation of Barnes, Alex Eubanks and Krall were big reasons the Tigers had a 3.59 ERA, .257 opponents’ batting average and 562 strikeouts against only 143 walks. The Tigers’ 3.93 strikeout-to-walk ratio was easily best in the nation and set the school record. Clemson’s 8.88 strikeouts-per-nine-innings-pitched mark was its best since 1996 as well.

Barnes accumulated 113 strikeouts, most by a Tiger since 1996, against just 22 walks and had four 11-strikeout games along with a 3.20 ERA in 101.1 innings pitched. Eubanks also had triple-digit strikeouts, as he was 7-6 with a 4.09 ERA and 104 strikeouts against only 15 walks in a team-high 105.2 innings pitched. Eubanks had a team-high two shutouts, two of the five thrown by league pitchers in ACC regular-season games in 2017.

Wright State handed the Tigers two losses in a three-game series to open the season, but they quickly rebounded to win 29 of the next 32 games, started by Clemson’s late come-from-behind win against Western Carolina.

In the series opener against Elon on Feb. 24, Barnes, Gilliam and Brooks Crawford combined for a school-record 23 strikeouts against no walks in Clemson’s 1-0 win in 13 innings, which propelled the Tigers to a three-game sweep.

After a midweek victory over Wofford, the Tigers won the series against No. 4 South Carolina for the third year in a row. After a 2-0 loss at home in game one, Patrick Cromwell’s solo homer in the ninth inning broke a 5-5 tie in the Tigers’ 8-7 win in Greenville. In the series finale in Columbia, Clemson trailed 3-2 with a 3-2 count and two outs in the ninth inning before Beer belted a solo homer to tie the score. The Tigers went on to win 5-3 in 11 innings, as Beer won the Bob Bradley Award as Clemson’s MVP of the series.

Another win in Greenville, this time over Michigan State, a three-game sweep of Notre Dame and a two-game, midweek sweep of Yale at home were part of an eight-game winning streak before No. 11 Virginia stopped it with a 2-0 win on March 17. However, Clemson responded with victories, including a 12-1 drubbing in the finale, over the Cavaliers to win the series.

The Tigers hit the road for a Spring Break trip to College of Charleston and Kingston, R.I., to face Boston College, as Clemson won all four games. The Tigers blanked the Eagles in the last two games and held Furman scoreless on March 28. It marked the first time since 1992 that Clemson registered three shutout wins in a row and just the fourth time in school history.

Rohlman’s walkoff single in the 11th inning lifted Clemson to a midweek win over Winthrop, then the Tigers won two of three games at Georgia Tech. In the series finale, Rohlman went 3-for-5 with two homers, a double and seven RBIs in Clemson’s 13-6 victory.

Clemson recorded another perfect week when it shut out Georgia on the road 4-0 before sweeping Virginia Tech at home by a combined score of 26-7. The Tigers then defeated Charleston Southern 6-5 in 11 innings on Cox’s walkoff single. The Tigers opened the series at No. 25 Florida State with a wild 12-10 win, their 30th victory of the year, but the Seminoles rallied for victories in the final two games of the series.

After Clemson outlasted Georgia 9-7 in a midweek home contest, the Tigers beat No. 17 Wake Forest twice in three games. In the series opener, Clemson scored three runs in the ninth inning in its 8-7 walkoff victory, then it blanked the Demon Deacons 11-0 before they salvaged the series in game three.

The Tigers downed College of Charleston 7-2, then they suffered three close losses at No. 3 North Carolina in late April. The Tigers had late leads in all three contests during the competitive series.

After five days off for final exams, Clemson won two of three home games against Nevada before topping Furman in Greenville. No. 2 Louisville then won three two-run games at Clemson.

Beer ended the three-game skid with a grand slam in the eighth inning to give the Tigers an 11-8 win over No. 24 Coastal Carolina in their final non-conference game of the season before NC State defeated Clemson twice in close games in a three-game series to conclude the regular season.

The Tigers went 0-2 in the ACC Tournament at Louisville, Ky., but they had just enough on their resumé to host a regional at Doug Kingsmore Stadium, where they totaled their most wins (3) in an NCAA Tournament since 2010.

Clemson topped UNC Greensboro in its regional opener before falling to Vanderbilt in the winners’ bracket game. After another victory over UNC Greensboro in an elimination game, Jackson pitched a two-hit shutout in the Tigers’ 6-0 win over Vanderbilt. It was the first shutout by a Tiger in an NCAA Tournament game since 2005. But the Commodores ended Clemson’s season a day later in the regional’s winner-take-all game. Beer, Davidson, Jordan Greene, Jackson and Kyle Wilkie were named to the Clemson Regional All-Tournament team.

Nine Tigers were selected in the major league draft after the season, tied for fourth most in the nation and tied for most in the ACC. It was also the most Tigers drafted since 2009 and tied for third most in school history. Barnes (fourth round) and Pinder (seventh round) were chosen on day two, while Eubanks (14th round), Paul Campbell (21st round), Krall (28th round), Jeremy Beasley (30th round), Williams (31st round), Ryan Miller (31st round) and Rohlman (35th round) were selected on day three. Jackson signed a free-agent contract with the Seattle Mariners a well.