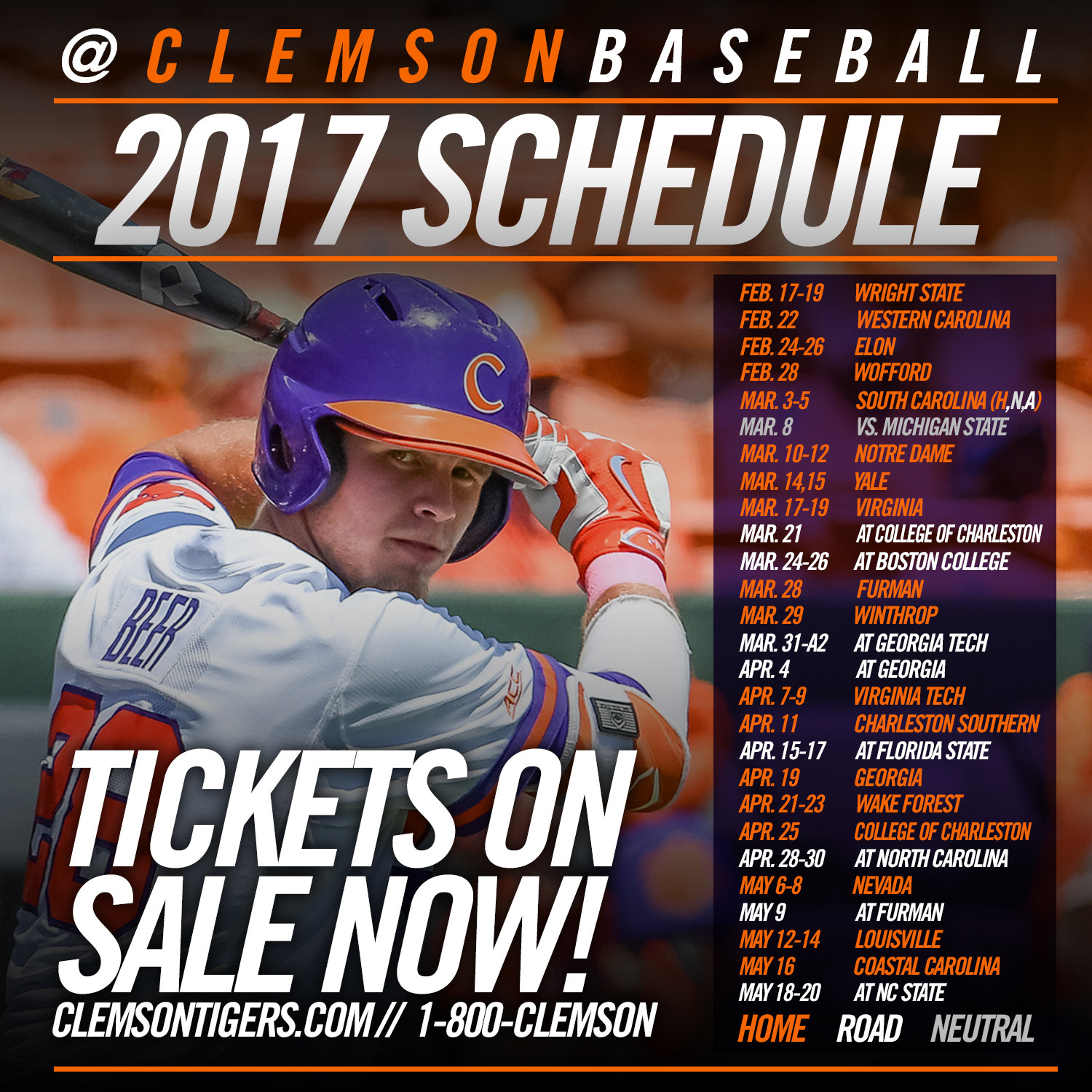 Clemson opens the season with a nine-game homestand at Doug Kingsmore Stadium. After hosting Wright State, Western Carolina comes to town for the first midweek game of the year, followed by a three-game series against Elon.

After the Tigers host Wofford in a midweek contest, Clemson faces South Carolina three times at three different sites. The Tigers host the Gamecocks on March 3 to open the series in the 313th all-time meeting, then the two match up at Fluor Field the following day. On March 5, the series concludes in Columbia. The Saturday contest at Fluor Field marks the sixth time in seven years the two rivals play at Fluor Field for their neutral-site game.

The Tigers face Michigan State in their second game at Fluor Field in five days, then Clemson begins its ACC slate by hosting Notre Dame in a three-game series. The Tigers stay at home for five games the next week with a two-game midweek series against Yale and a three-game series versus Virginia.

Clemson hits the road during Spring Break with a midweek contest at College of Charleston on March 21 before traveling north to face Boston College. After home midweek games against Furman and Winthrop, the Tigers play at Georgia Tech for a three-game series from March 31 to April 2, then Clemson returns to the Peach State to face Georgia on April 4.

The Tigers host Virginia Tech and play at Florida State the next two weekends sandwiched around a home game versus Charleston Southern, then Clemson hosts Georgia and Wake Forest the following week.

After playing at North Carolina from April 28-30 and taking five days off for final exams, Clemson hosts Nevada in a three-game non-conference series. The Tigers then play their third and final game at Fluor Field (against Furman) before hosting Louisville from May 12-14.

Clemson concludes the regular season with a midweek home game against defending national champion Coastal Carolina before traveling to Raleigh to take on NC State.

Twelve teams will participate in the ACC Tournament at Louisville (Ky.) Slugger Field from May 23-28. The new format features four pools with three teams in each pool. Pool play takes place on Tuesday, Wednesday, Thursday and Friday, with three games per day. Each pool plays a round robin, with the top team advancing to the semifinals. The semifinals take place on Saturday, followed by the championship game on Sunday.