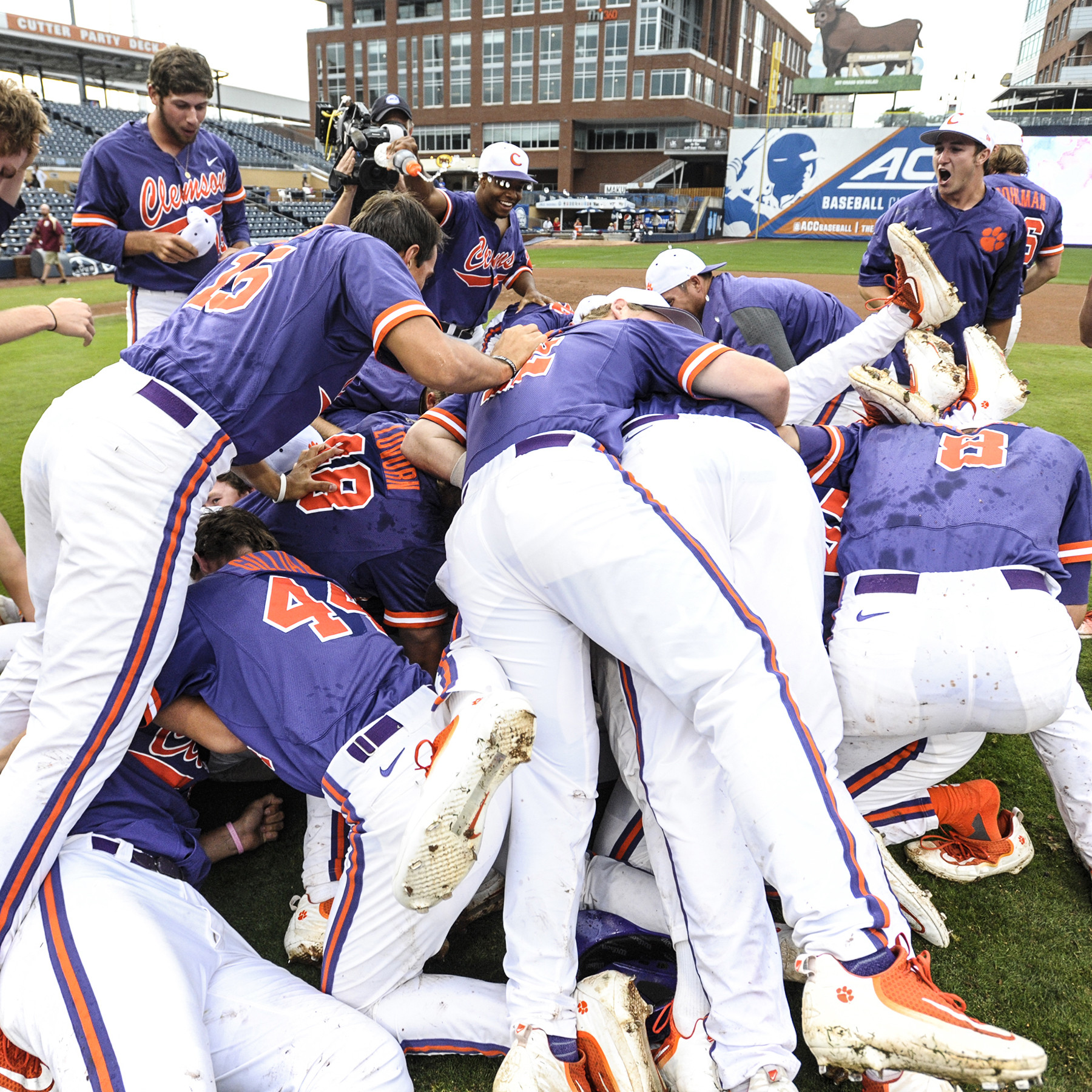 When Monte Lee was hired as head coach in June 2015, pundits did not expect much from the 2016 Tigers. The 2015 team lost many of its leaders in the field and ACC Pitcher-of-the-Year Matthew Crownover along with the other two weekend starting pitchers. But under Lee’s direction, the Tigers exceeded expectations.

Clemson roared to a 17-3 record, including a 5-1 start in ACC games, thanks to stellar pitching and timely hitting. After slumping during the middle of the season and falling to 10-13 in ACC games, the Tigers rebounded with one of their best finishes in recent history, as they won 11 of their last 13 games of the season for the first time since 1991 and were ranked No. 15 in the final USA Today coaches poll. During that stretch, the Tigers also had a 10-game winning streak. Clemson won each of its last eight games away from home as well.

With its late run, Clemson won six of its last seven league games, captured its first ACC championship in 10 years and earned a top-eight national seed in the NCAA Tournament.

The Tigers accomplished these feats while playing one of the toughest schedules in the country. A total of 37 of their 64 games (58 percent) were against teams that played in the NCAA Tournament, and Clemson had a 21-16 record in those 37 games.

Another major key was Clemson’s school-record 14 one-run wins against only six one-run losses and 5-1 record in extra-inning games. The Tigers also had a 13-1 record in non-conference midweek games and a 22-4 record in all non-conference games, their best mark since 2011.

The Tigers batted .273 but had a solid .388 on-base percentage thanks to 359 walks, second most in the nation, and 72 hit-by-pitches. Clemson slugged an ACC-high 75 home runs, which tied for seventh most in the nation and more than doubled its previous year’s total, and scored 7.2 runs per game.

Beer, who graduated high school a semester early to enroll at Clemson in January, hit .369 with an ACC-high 18 homers (most by a Tiger freshman in history and most by any Tiger since 2010), 13 doubles, 70 RBIs and a .535 on-base percentage. He led the team in batting average, homers, slugging percentage (.700), walks (62), hit-by-pitches (15) and on-base percentage, while his slugging percentage was the best mark by a Tiger since Khalil Greene slugged .877 in 2002. Beer, who was third in the nation in walks and fourth in on-base percentage, reached base via a hit or walk in each of the last 60 games he had a plate appearance and had a 26-game hitting streak, the longest by a Tiger freshman in history.

Chase Pinder added 11 home runs and a .412 on-base percentage as the leadoff batter, while Eli White ended the season on a tear while totaling a team-high 24 steals.

The pitching staff had a 4.43 ERA and .268 opponents’ batting average, led by Krall. The lefty became the first Tiger in history to lead the team outright in wins (10) and saves (5) in a season. He was 10-2 with an ACC-best 1.67 ERA, .203 opponents’ batting average and 65 strikeouts against 17 walks in 80.2 innings pitched over 29 appearances (three starts). He was also seventh in the nation in ERA.

Lee’s first game as Tiger head coach saw the Tigers come up short, as Maine edged the Tigers 4-3 at Doug Kingsmore Stadium. But Clemson answered back to win the series, then it swept James Madison the following weekend at home.

After blanking Wofford, Clemson defeated No. 18 South Carolina twice in three games. The Tigers allowed just one combined run in the final two games, as Clate Schmidt, who recovered from nodular sclerosing Hodgkin’s lymphoma after being diagnosed in the summer of 2015, and Alex Eubanks made stellar starts on the mound. Pinder won the Bob Bradley Award as Clemson’s MVP of the series.

Clemson edged Winthrop at home, the first of six walkoff wins in 2016, before winning two of three games at Wake Forest to begin ACC play. Trailing 8-6 in the seventh inning in game three, Okey blasted a grand slam to propel the Tigers to victory. Beer erupted for four homers in the series, becoming the first Tiger since 2006 with four long balls in a series.

The Tigers stayed on the road to win two games at The Citadel before sweeping No. 22 Boston College at home. Beer’s walkoff homer in the 10th inning of game three completed the sweep.

After a midweek win over Presbyterian College, which upped Clemson’s record to 17-3, No. 4 Miami (Fla.) stopped the Tigers’ momentum by handing them a three-game sweep in Coral Gables. The first two setbacks were walkoff losses. Clemson hit eight homers in the series, but only scored 10 runs on those long balls. Okey was 9-for-14 with two homers, while Pinder was 7-for-14 with three homers in the series.

Without Beer, Clemson defeated Furman and Western Carolina in road midweek games, then the Tigers won two of three home games against Pittsburgh in early April.

The Tigers rallied for an 11-6 win at Georgia thanks in large part to Beer’s long home run that tied the score in the eighth inning, then they fell twice in three games at Duke in low-scoring contents at Jack Coombs Field.

Another comeback win came in the form of a 7-6 victory in 10 innings over Western Carolina, but No. 6 Louisville stymied the Tigers all weekend with a three-game sweep in Kentucky.

Clemson began a 13-game homestand with a 12-0 win over Georgia, then Georgia Tech won two of three games over the weekend.

After five days off for final exams, a rejuvinated Tiger team topped a top-five Florida State squad twice in three games. Krall tossed 7.0 scoreless innings of three-hit ball with eight strikeouts in relief to earn the win in the series finale.

Beer’s second walkoff hit lifted the Tigers to an 11-inning win over Furman before Clemson downed No. 9 NC State twice in three games. In his first career start, Krall allowed just one run on five hits in a complete-game victory in the Tigers’ series-clinching 2-1 win.

Clemson won back-to-back series against No. 3/4 Florida State and No. 9 NC State, meaning Clemson won two top-10 series in a row. It marked the first time since 1994 and just the second time since the ACC went to a three-game series format in 1990 that Clemson accomplished the feat.

The Tigers concluded the homestand by splitting a pair of midweek games against Lee’s former team, College of Charleston, before winning two of three games at Georgia Southern and downing Charleston Southern at home.

With its postseason status uncertain, Clemson travelled northward and swept Notre Dame. In the opener, Chris Williams belted a home run in the 11th inning, arguably Clemson’s most significant moment of the season, in the Tigers’ 2-1 win, then the Tigers won the last two games to finish with a 16-14 conference mark and earn the No. 6 seed in the ACC Tournament at Durham (N.C.) Bulls Athletic Park.

Clemson won close games over No. 8 Virginia (5-4), No. 3 Louisville (5-3) and Wake Forest (5-4) to advance to the ACC title game against No. 11 Florida State. The Tigers jumped out to an 18-1 lead early in a game filled with long rain delays and held on for the win. It was Clemson’s first tourney championship since 2006 and 10th overall, most among ACC teams.

Mike Triller, who had only made two starts during the regular season, was named ACC Tournament MVP by going 6-for-13 with three doubles, two homers and four RBIs in three games. Krall, who was 2-0 with one save in finishing all four games, and Schmidt, who pitched 8.2 effective innings against Louisville, joined Triller on the All-ACC Tournament team.

With its strong finish, Clemson was awarded the No. 7 national seed in the NCAA Tournament, marking the first time the Tigers hosted a regional since 2011.

Clemson tied a Tiger NCAA Tournament record with 24 runs and set the tourney record with seven homers in its 24-10 win over Western Carolina in the opener. But the Tigers ran into a red-hot Oklahoma State team, who beat them twice sandwiched around Clemson’s 15-3 win over the Catamounts.

The Tigers hit .312 with 43 runs and 12 homers in the four regional games. Okey led the way by going 6-for-12 with three homers, eight RBIs, seven runs, seven walks and a .684 on-base percentage. Beer, Okey and Williams were all named to the Clemson Regional All-Tournament team.

Six Tigers were selected in the major league draft after the season, tied for 15th most in the nation. Okey was a second-round selection on day one, while Alex Bostic was a 10th-round pick on day two. White (10th round), Weston Wilson (17th round), Schmidt (20th round) and Krall (28th round) were drafted on day three.