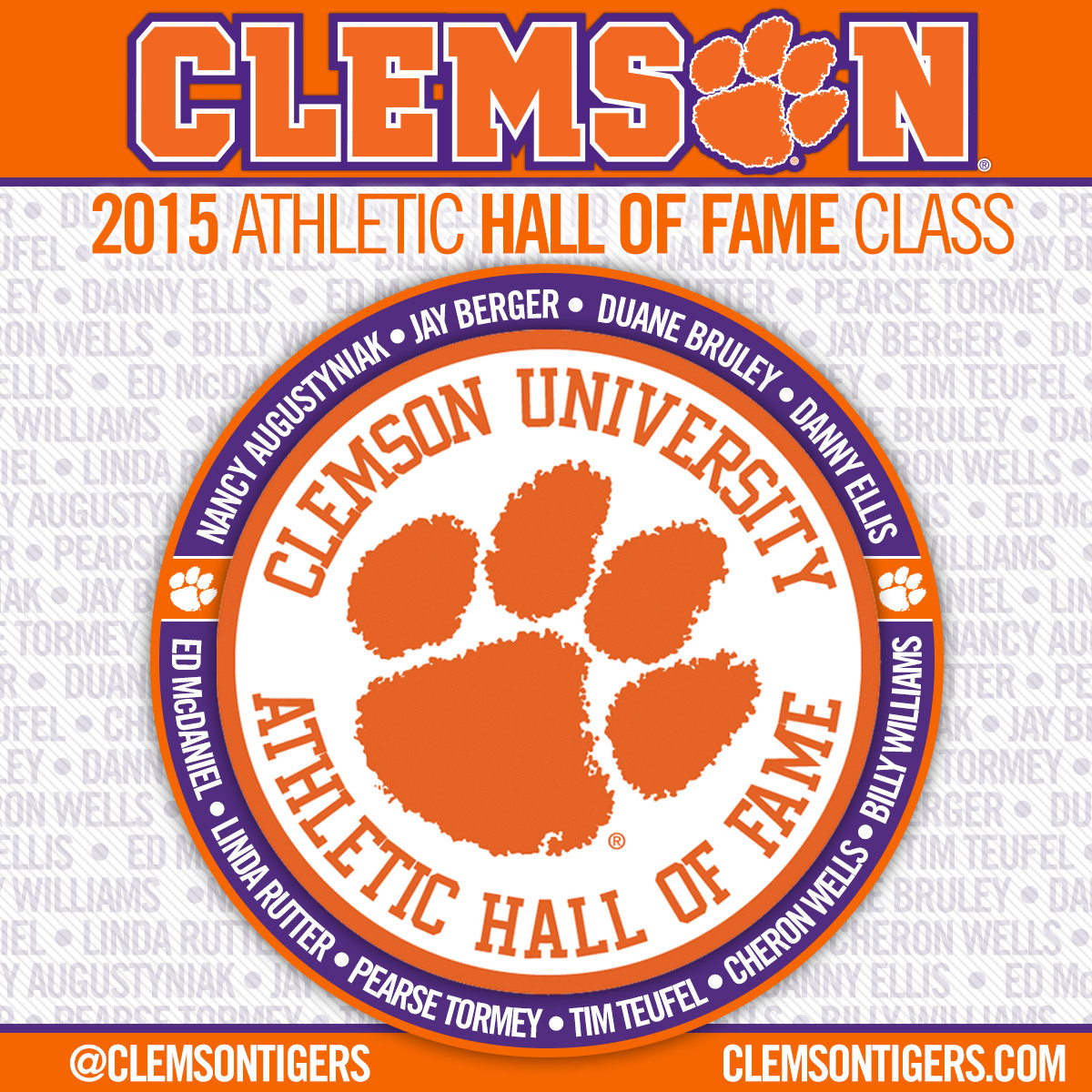 Induction weekend is scheduled for October 9-10, with the inductees being honored at the Clemson-Georgia Tech football game.

Jay Berger (Men’s Tennis, 1985-86) will also be inducted in the Intercollegiate Tennis Association (ITA) Hall of Fame later this spring.   He was a 1986 All-American in singles play.

Danny Ellis (Men’s Golf, 1989-93) was a three-time All-American for the Tigers.  He was also a two-time first team All-ACC selection.

Ed McDaniel (Football, 1988-91) was a first-team All-American in 1991 and enjoyed a 10-year NFL career with the Minnesota Vikings.

Linda Rutter (Women’s Swimming, 1982-86) was a six-time All-American during her Clemson career.   She was also a six-time ACC champion.

Pearse Tormey (Men’s Soccer, 1987-90) was a starter on Clemson’s 1987 National Championship team, and was a two-time-All-American.

Cheron Wells (Women’s Basketball,1991-92) led the Lady Tigers to the NCAA Tournament’s Elite Eight in 1991. She was a two-time All-American.

Billy Williams (Men’s Basketball, 1977-80) was an All-American his senior year and led the Tigers to the NCAA Tournament’s Elite Eight in 1980.  He was a first-team All-ACC selection.

•2015 Intercollegiate Tennis Association (ITA) Hall of Fame Inductee•1986 All-American, singles•Third on the Clemson career list for best winning percentage in singles play (.805).•Had a career record of 91-22 in two years of play before he turned pro after sophomore year.•1985 ACC Champion, No. 4 singles, No. 2 doubles•1988 Member of the U.S. Davis Cup team•Reached Final Eight of US Open while he was still at Clemson (1985)•Named to ACC 50-Year Anniversary team

•Winningest Coach In Clemson History by Pct. (Regardless of sport) with a  minimum of 10 yrs. at the school•Led the Tigers to their first Atlantic Coast Conference Championship in 1969 with a 16-0 mark •He served as the head coach for 11 seasons.   •He earned his BS from Wisconsin, his MS from Stanford and his PHD in chemical engineering from Tennessee•Head Tennis Coach at Tennessee before his arrival at Clemson•Served as professor of chemical engineering at Clemson while coaching•Bruley had a 150-42 record at Clemson (.781 pct.)•Coached Eight ACC Champions in Singles•Coached Six ACC Champion Teams in Doubles•Coached 34 All-ACC Academic Selections•Led Clemson to the ACC Regular Season Championship in 1969 and 1971•Had a 61-14 record against Atlantic Coast Conference Competition (.813 pct.)   •Had two undefeated seasons in the ACC: 1969–7-0, 1971–7-0.

•Three-time All-American, he was honorable mention selection in 1990,1992 and 1993•First freshman in Clemson golf history to be chosen All-American•Runnerup at US Amateur in 1993, he played in the Master’s in 1994•Two-time first-team All-ACC•Played on four NCAA Tournament teams that finished in the top 20•Ranked 10th in Clemson history in career stroke average when he graduated•Named to ACC 50-Year Anniversary Team in 2003

•First-team All-American according to College Pro Football Weekly in 1991 •Third-team AP All-American that season•First-team All-ACC in 1991•Led Clemson in tackles three of his four years, including 114 in 1991 when Clemson led the nation in rushing defense•Ranked in top five in Clemson history in tackles with 389•One of four semifinalists for the Butkus Award in 1991•Played 10-year NFL career with the Minnesota Vikings•Named to the Pro Bowl in 1988, he retired in 2001•Earned his degree from Clemson while playing in the NFL

•First-team All-American in 1980 by Sporting News and American Baseball Coaches Association•First-team All-ACC in 1979 and 1980.•Ninth in Clemson history in batting average with .367 figure, fourth among players with at least 200 at bats.•Starter on Clemson’s 1980 College World Series team.•Played in the major leagues for 10 years, he played on the 1986 World Champions New York Mets

•1979-80 All-American by Helm’s Foundation.•Member of Clemson’s NCAA Elite Eight squad in 1979-80•1980 First-team All-ACC•Averaged over 20 points per game his senior year in ACC play, best in the ACC that year•Had nine 20-point games in 14 league contests that season•Shot 53.5 percent from the field in 1980, fourth best percentage by a guard in Clemson history•First in school history in career field goal percentage by a Clemson guard•Second round pick of the Houston Rockets in 1980•First-team All-District as a senior