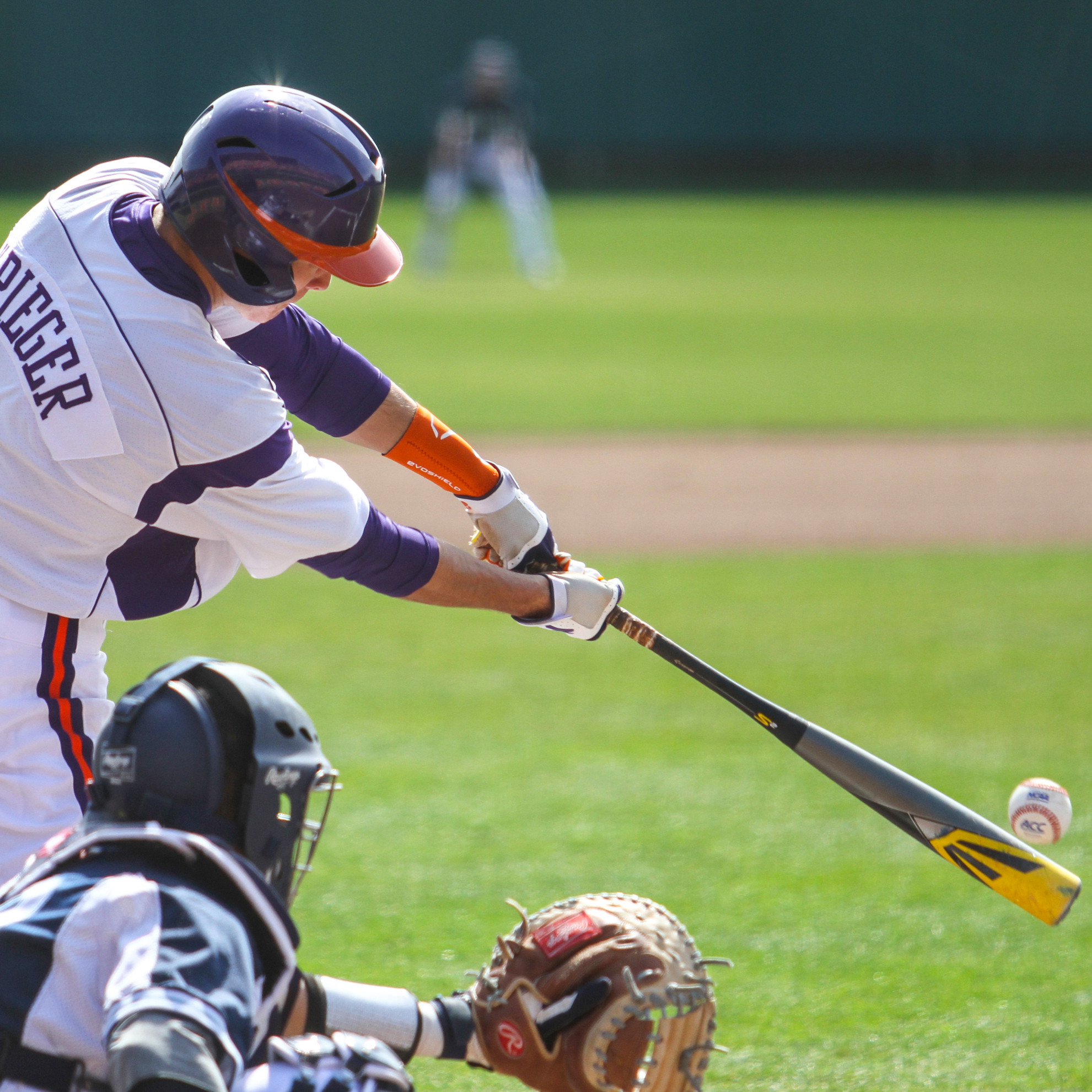 The 2015 edition of Clemson Baseball features five returning starters in the field and all but two of its pitchers from the 2014 team that held opponents to a .243 batting average. However, the Tigers, who return 23 of their 32 lettermen and are No. 24 in the Baseball America preseason ranking, must replace All-America righthander Daniel Gossett along with some valuable players in the infield.

“I’m excited to get the season underway,” said Head Coach Jack Leggett, who has led the Tiger program to 923 wins in 21 seasons as head coach, the seventh-most victories in the nation during that time span. “We have a good mix of players returning with some great leadership qualities that will make for an exciting 2015 season.”

Associate Head Coach and Pitching Coach Dan Pepicelli, who is in his sixth season at Clemson, returns 14 of the 16 Tigers who pitched in a game in 2014. The Tigers will have to fill the void left by Gossett, who had a 1.93 ERA and .202 opponents’ batting average atop the weekend rotation. Clemson must also replace closer Matt Campbell, who had a miniscule 0.84 ERA and .144 opponents’ batting average along with a team-high eight saves in 2014.

Assistant Head Coach and Recruiting Coordinator Bradley LeCroy brought in another solid recruiting class of 14 newcomers. As a hitting coach, LeCroy and the rest of the staff must replace departing All-ACC players Jay Baum (OF), Garrett Boulware (DH/UT) and Steve Wilkerson (2B), who were all selected in the 2014 draft.

Volunteer Assistant Coach Stephen Faris returns for his second season at the position, while Taylor Harbin is in his first season as student assistant coach after playing eight seasons in the minors. LeCroy (1997-00), Faris (2004-06) and Harbin (2005-07) all played for the Tigers under Leggett.

“We have a tough schedule again in 2015, including many challenging games in and out of the ACC,” added Leggett. “I’m looking forward to see how we compete with some of the best programs in the nation.”

Renovations to Doug Kingsmore Stadium continued this past offseason. New premium, field-level seats were added behind home plate. A new three-story player facility, including a new lockerroom, is also under construction and slated to be completed later this year.

Clemson returns its primary catcher in sophomore co-captain Chris Okey (Mount Dora, Fla.). The preseason third-team All-American by Perfect Game started 41 of 61 games as a freshman and totaled four homers and 41 RBIs. He made several highlight-reel plays on defense thanks to his rare athletic ability as a catcher. Okey also played for the USA Collegiate National Team in the summer and was second on the team in on-base percentage (.407) and fourth in batting average (.286).

Clemson’s other catcher is freshman Robert Jolly (Myrtle Beach, S.C.). He had one of the best fall seasons at the plate and is the Tigers’ first lefthanded-hitting catcher since Brian Ellis (1997-00). Jolly was the top-rated catcher in South Carolina by Diamond Prospects.

The leader of the infielders is junior switch-hitter and co-captain Tyler Krieger (Johns Creek, Ga.). Krieger, who can play shortstop and second base, missed the fall season while recovering from a shoulder injury, but looks to be ready for the 2015 campaign. Krieger, a Second-Team All-ACC selection who hit a team-high .338, fifth-best in the ACC, in 2014, is the No. 46 college prospect in the nation for the 2015 draft by Perfect Game.

Weston Wilson (High Point, N.C.), the No. 79 sophomore in the nation according to Perfect Game, started 49 games at third base in 2014 and will compete for the starting spot at the same position in 2015. He showed his power potential while flashing a steady glove at third base as a freshman.

Eli White (Easley, S.C.) is another sophomore who showed his ability as a fielder in 2014. His strong arm makes him a candidate to start at shortstop after committing just one error in 25 chances there as a freshman.

Just a sophomore and like Okey, co-captain Andrew Cox (Belton, S.C.) is one of the team’s best leaders in the clubhouse. He saw limited action in 2014 as a freshman, but the two-time ACC Academic Honor Roll member will be in the mix at first base in 2015. Cox will also compete for playing time in the outfield.

Redshirt freshman Glenn Batson (Greenville, S.C.) is another returning Tiger who has shown flashes of his power potential. Batson, nephew of former Tiger and Major Leaguer Bill Spiers, hit eight home runs in the Coastal Plain League last summer and will compete for playing time at the corner infield positions.

The Tigers added three newcomers at infield positions this past offseason. Chase Pinder (Poquoson, Va.), who has two brothers who played in the ACC, is the No. 88 freshman in the nation by Perfect Game. He has the ability to play several infield positions as well as in the outfield.

Freshman Adam Renwick (Spartanburg, S.C.) was the No. 5 player and No. 2 shortstop in South Carolina by Diamond Prospects after a standout career at Dorman High School.

Another freshman, Jack Huggins (Newberry, S.C.), will compete for playing time. The five-time letterman at Newberry High School is the son of Mike Huggins, who was a pitcher at Clemson from 1986-89.

The other returning starter in the outfield is junior co-captain Steven Duggar (Moore, S.C.). The right fielder has the strongest outfield arm on the team and is one of the fastest baserunners. He has started all 123 games in his career and is a preseason third-team All-American by Collegiate Baseball and Perfect Game. In 2014, Duggar was a Third-Team All-ACC selection who hit .294 and tied for second in the ACC with 25 stolen bases.

Three returning Tigers are in competition to start in left field. Junior Mike Triller (Rutland, Vt.) is one of the hardest-working players on the team and is a career .291 hitter in 44 games over two seasons. He has been one the team’s best hitters off the bench.

Sophomore Maleeke Gibson (Sumter, S.C.) redshirted in 2014 after showing off his speed in the outfield as a freshman in 2013. He will also compete for innings in left field. Reed Rohlman (Moore, S.C.) is a redshirt freshman who batted .300 with a .402 on-base percentage in the Coastal Plain League last summer.

The Tigers brought in two freshman outfielders who showed off their skills in the fall. Drew Wharton (Suwanee, Ga.) played in many all-star showcases before enrolling at Clemson and is one of the Tigers’ highest-rated newcomers as an outfielder and first-baseman. K.J. Bryant (Taylors, S.C.) was the No. 1 outfielder in South Carolina by Perfect Game after a standout career at Wade Hampton High School.

Clemson’s deep 2015 pitching staff returns one of the top two pitchers from 2014 in junior lefthander and co-captain Matthew Crownover (Ringgold, Ga.). In 32 appearances (30 starts) over two seasons, he has a 2.60 ERA and is in the top four in school history in walks per nine innings pitched (1.97) and strikeout-to-walk ratio (3.65). In 2014, he was a Third-Team All-ACC selection who had a 2.90 ERA and 90 strikeouts against only 20 walks in 99.1 innings pitched. Crownover was drafted in the 21st round by the Giants in 2014, but elected to return to Tigertown.

Another lefthander, junior Zack Erwin (Duluth, Ga.), will vie for a spot in the weekend rotation. Erwin has been both a starter and reliever during his first two seasons at Clemson, as he has a 9-5 record and 3.87 ERA in 132.2 innings pitched over 48 appearances in his career. In 2014, he had a .222 opponents’ batting average and pitched a six-hit shutout against James Madison. He also struck out 13 batters in 7.0 innings pitched in a start against Western Carolina in 2014.

Junior righthander Clate Schmidt (Acworth, Ga.) has also seen time as a weekend starter and will compete for the same role in 2015. In 2014, he had a 3.68 ERA in 20 appearances (eight starts). He has been especially effective when keeping the ball down in the strikezone. He showed that when he allowed just two runs and one walk with six strikeouts in 8.1 innings pitched in a start against Georgia Tech in the 2014 ACC Tournament.

Jake Long (Anderson, S.C.), a senior righty, returns for his final season after making his Clemson debut in 2014. He made 12 starts on the mound, third-most on the team, and had a 3-3 record and .255 opponents’ batting average. His best performance came against No. 3 South Carolina, when he yielded just one run on five hits in 6.1 innings pitched.

Junior righthander and co-captain Patrick Andrews (Hilton Head Island, S.C.) is back at full strength after missing most of 2014 with an elbow injury that forced him to undergo “Tommy John” surgery. He has the versatility to be both a starter and reliever. In January, Andrews traveled to the NCAA Convention in Washington, D.C. as one of three ACC student-athletes chosen to hold voting power on proposed governance rule changes under the NCAA’s Division I autonomy process.

Clay Bates (Rock Hill, S.C.), a graduate righthander, is back for his fifth season at Clemson. The hard thrower was one of the team’s most dependable relievers in 2014 and will be counted on in the same role in 2015. In 30.2 innings pitched over 27 relief appearances, he had a .248 opponents’ batting average.

Sophomore righty Drew Moyer (Gilbert, S.C.) had one of the best seasons by a Tiger reliever in 2014. He was 5-1 with two saves and a 3.46 ERA in a team-high 28 relief appearances. He will be counted on to solidify the bullpen in 2015.

Campana has been plagued by injury, but has been effective in his 11 relief appearances the past two seasons. Koerner is a two-time ACC Academic Honor Roll member who has been both a weekday starter and reliever. Lovorn was a long reliever in his first active season in 2014.

Pohle, who graduated in December with a degree in visual arts, has twice battled back from injury and won the 2014 Dedication Award for outstanding work in the strength training room. Schnell was one of Clemson’s best relievers in 2013 and looks to regain that form in 2015. Toney has seen limited action, but will compete for innings as one of the hardest throwers on the team.

Sophomore lefthander Alex Bostic (Matthews, N.C.) also returns as a reliever who has the potential to be a significant contributor for years to come.

Vetzel led Spartanburg Methodist College to the Junior College World Series in 2014 after starring at J.L. Mann High School. Campbell was the No. 5 player and No. 2 righty in Massachusetts by Perfect Game. Eubanks was an all-state pick at James F. Byrnes High School. Goren was an honorable mention All-American by Perfect Game.

Sophomore lefty Pat Krall (Downingtown, Pa.) played one season at Temple, where he had a team-best 0.66 ERA and .181 opponents’ batting average in 27.1 innings pitched as a freshman in 2014, before the program was dropped. Charlie Barnes (Sumter, S.C.), Alex Schnell (Milton, Ga.) and Hunter Van Horn (Tampa, Fla.) are three freshmen who will add depth to the staff from the left side, something the program has lacked in recent seasons.

Barnes was the state pitcher-of-the-year when he led Sumter High School to the state title as a senior. Schnell, brother of Clemson senior righty Kyle Schnell, was a two-time all-state selection at the AAAAAA level in Georgia. Van Horn was the No. 7 lefthander in Florida by Perfect Game.