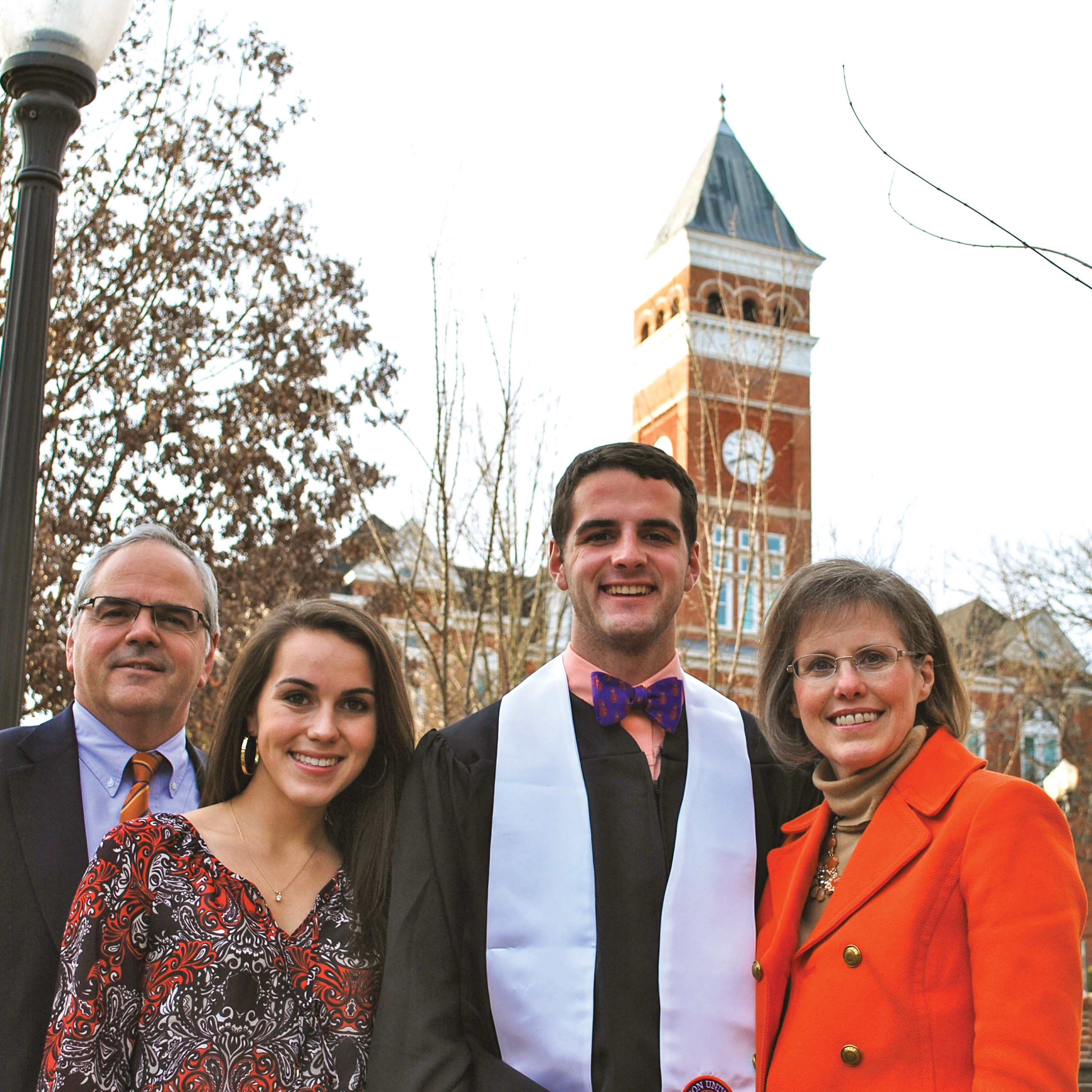 For Shan Thrift Pate, the 2014 Tiger Brotherhood Mother-of-the-Year recipient, making her college decision was an easy one. Pate grew up in nearby Westminster, S.C. and only knew one color…orange.

“I always wanted to go to Clemson,” said Pate.

While in college from 1983-87, she majored in nursing and was a member of Delta Delta Delta and Central Spirit.

“I loved the Clemson experience.”

Pate met her husband, Kirby, while she attended Clemson.

“All of the ‘Tri Delts’ went out for pizza on Sunday nights as a tradition. I spotted Kirby with his sister, Elizabeth, who was also a ‘Tri Delt.’ I wanted to know who the cute boy she was dating, and then someone said it’s her brother.”

Word got back to Kirby and he asked her out shortly after. The couple began dating during her sophomore year and got married after she graduated with her nursing degree in 1987. He graduated in 1986 with an architecture degree and with his master’s degree in 1988.

The Pates moved to the Atlanta area, where she worked as a nurse until she gave birth to her two children when she decided to be a stay-at-home mother.

Their two children, Kep and Callie, have followed in their parents’ orange footsteps and have experienced Clemson as students, not just fans. Kep graduated with a visual arts degree in December 2013 and Callie will graduate in May with a marketing degree.

Though they are a literal “Clemson Family,” it took Pate a second to collect her thoughts and put into words what Clemson Family means to her.

“Clemson is family to us,” she said. “We love when all of us get together on Saturdays for football and in the winter and spring for basketball games. We love to come to Clemson for any occasion.

She used words like, “Close-knit, loving, caring and helpful,” to describe Clemson and noted how the university is so, “full of tradition, pride and support for each other.”

During Pate’s senior year, she was subjected to that Clemson Family.

“While struggling with several large boxes, a very kind gentleman offered to help,” she recalled. “Once we arrived at Smith Hall, I realized he looked familiar and asked if we had met before. He smiled and introduced himself as Max Lennon. Then I realized the president of Clemson University had just helped unload my car!”

She summed it up best by saying, “The Clemson Family is an extension of our immediate family. No matter where we are when we see another Clemson fan or grad, there’s an immediate connection, and I love that.”

Other than weekend visits to Clemson and spending time at the family’s nearby lake house, Pate spends a lot of time ministering. She is a three-time ovarian cancer survivor and is currently battling a fourth reoccurrence.

“I’m going for a fourth survival on that,” said Pate matter-of-factly.

Pate’s faith is incredibly important to her and she does her part to give back in her church community at Johns Creek Baptist Church. For the last 20 years, she has run a mothers’ fellowship and bible study once a week that averages 70 women a week.

She also started a “Sweet Tea” ministry, in which the group puts on four gatherings a year to serve as, “an uplifting experience for anyone touched by cancer.” The group has speakers and comedians (including former Clemson basketball player Tanner Smith) visit so, “the ladies leave with less of a burden than they had walking in.”

When Pate talked about the moment she found out she was chosen as Mother-of-the-Year, she still struggled to find words. But the smile on her face said it all.

“I was speechless,” said Pate. “A few of the Tiger Brotherhood members came to our house. My husband told me a client was coming to visit and that I needed to get a little dressier than usual, but I didn’t suspect a thing.

“The doorbell rang and I saw Matthew Gabriel (vice president of Tiger Brotherhood). I thought he was there to see my son, but it turned out he was there to see me. They had orange roses. I think it took about 30 minutes for me to be able to talk. I was so surprised! The fact it was Mother’s Day made it the best day ever!”

Pate is honored to receive the award and can’t wait to “dot the i” on Homecoming, a tradition she has watched for as long as she can remember.

“It’s so overwhelming,” admitted Pate. “I can’t imagine what it’ll feel like. I cry every time I think about it. I’ve watched others do it for so many years. It will be one of the most exciting moments of my life, behind my wedding and the birth of my two children. I’ve never been more humbled or flattered.”