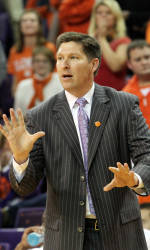 CLEMSON, SC – The 2011-12 men’s basketball schedule was announced Wednesday by Head Coach Brad Brownell and the Atlantic Coast Conference. The Tigers’ 30-game slate is highlighted by a non-conference game at 2011 Elite Eight participant Arizona. The Tigers and Wildcats have agreed to a home-and-home series, with Arizona slated to play at Littlejohn Coliseum during the 2012-13 season. Clemson also will compete in the Diamond Head Classic in Hawaii in December, prior to a conference schedule that includes all 16 regular season games on live television and 13 that will be streamed live on ESPN3.com.

“We’re pleased with the way our schedule turned out,” said Brownell, who guided Clemson to 22 wins in his first season at Clemson last year. “The marquee series is the one we started with Arizona. Any time you have an opportunity to start a series with a top-10 program, that should bring a lot of excitement to our fans.

“As usual, we’re very pleased with the number of games we have that will be televised by ESPN and the other networks. People will be able to follow the Tigers throughout the season, home and away.”

The season gets underway with a home game on Friday, Nov. 11 against Gardner-Webb. Clemson then travels to Charleston, SC for a non-conference road game against The Citadel on Wednesday, Nov. 16. Other non-conference games of note in the month of November will be against in-state foes College of Charleston (Nov. 19), Coastal Carolina (Nov. 22) and Furman (Nov. 25). All three programs advanced to the postseason a year ago. The Chanticleers are under the direction of Cliff Ellis, who will coach in his first game against Clemson since he was the Tigers’ head coach from 1984-94.

“We were able to schedule games against a lot of in-state teams, several of which had outstanding seasons a year ago and have coaches that do really good jobs,” Brownell said. “It will be nice to bring Coach Ellis back to Clemson. He had tremendous success here, and it will be good to recognize him.”

Clemson’s 2011 Big Ten/ACC Challenge opponent will be the University of Iowa, and the two teams are set to square off against one another at Carver-Hawkeye Arena on Tuesday, Nov. 29 at 9:15 PM in a game that will be televised by ESPNU.

The Tigers will host rival South Carolina on Sunday, Dec. 4. The game between the Tigers and Gamecocks will tip off at 3:30 PM on ESPNU. Clemson then travels to Tucson, AZ the following week for a Dec. 10 game at Arizona. The Wildcats won 30 games a year ago and lost in the Elite Eight of the NCAA Tournament to eventual champion Connecticut by just two points. This will be the first series meeting since the two met in the second round of the 1989 NCAA Tournament in Boise, ID.

The Tigers will compete in the Hawaiian Airlines Diamond Head Classic from Dec. 22-25 in Honolulu, HI. Clemson’s first-round opponent will be UTEP on Thursday, Dec. 22. The game will be televised by ESPNU at 3:00 PM, with the winner advancing to face the winner of Kansas State vs. Southern Illinois on Dec. 23. The final round of games will take place on Christmas Day.

“Our players will enjoy the trip to Hawaii, and we will play some really good teams,” Brownell said. “A lot of people will be able to watch our games over the Christmas holiday as well.”

Clemson will have six days off from competition following the Hawaii trip before returning home to play host to East Tennessee State, a top-100 RPI team a year ago out of the Atlantic Sun Conference. The game is scheduled for New Year’s Day at 4:00 PM.

Conference play will open at home on Saturday, Jan. 7 against 2011 Sweet 16 participant Florida State. Last season, the two teams split during the regular season. The Seminoles will bookend the ACC regular season for the Tigers, as Clemson will play on Florida State’s Senior Day in Tallahassee on Sunday, Mar. 4. Both games will be televised by ESPN2.

Following a trip to Chestnut Hill, MA to take on Boston College on Thursday, Jan. 12, Clemson will return home for its only regular-season contest against the defending ACC Tournament champions, the Duke Blue Devils. The two teams will square off at 6:00 PM on Sunday, Jan. 15 as part of ESPNU’s new ACC Sunday Night Basketball package.

Clemson will also play defending ACC regular season champion North Carolina just once, but the game will be played in Chapel Hill on Saturday, Feb. 18. That contest will be held at 4:00 PM in the Smith Center and will be on either ESPN or ESPN2.

In addition to regular ACC rivals Florida State and Georgia Tech, the three conference teams Clemson will play twice during the 2011-12 season are Virginia, Virginia Tech and Wake Forest. The Tigers will once again play host to Seth Greenberg’s Hokies on Senior Day. Last season, Clemson triumphed over Virginia Tech 69-60 to earn the No. 4 seed for the ACC Tournament. Clemson has four scholarship seniors on its 2011-12 roster.

The ACC Tournament returns to Atlanta, GA from Mar. 8-11, 2012. The games will be played at Philips Arena, home of the NBA’s Atlanta Hawks, a change from 2009 when the games were contested in the Georgia Dome. Clemson’s first game at Philips Arena will actually be at Georgia Tech when the two teams meet on Jan. 21, due to the renovation of Alexander Memorial Coliseum.