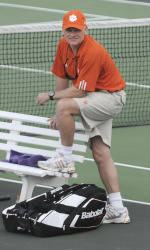 The Tigers’ 24-match schedule features 14 teams that were ranked in the final ITA Rankings. Also the schedule has Clemson playing 10 teams that participated in the 2009 NCAA Tournament.

Clemson will play five events this fall in the form of individual tournaments. The first event will be the Cliffs Invitational in Asheville, NC on September 17-20 in Asheville, NC.

The Tigers will open the dual-match segment of their schedule on Saturday, January 15, as Clemson plays host to Gardner-Webb and Davidson.

Clemson’s first ACC match of the season will be a home date with Miami on Saturday, March 13. Other ACC home matches will feature Boston College, Maryland, Virginia Tech, and Virginia.

The ACC Tournament will be played on April 22-25 in Cary, NC.

“I think this is a very challenging schedule,” said Clemson Head Coach Chuck McCuen. “This schedule will allow us to build during the season. We are excited about the team and this schedule.”