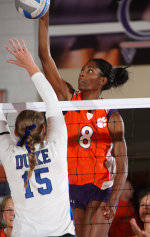 CLEMSON, SC – The 2008 Clemson volleyball schedule was announced by Head Coach Jolene Jordan Hoover on Wednesday. The Tigers will open the season with the 18th annual Big Orange Bash at Jervey Gym on Aug. 29 while playing in four total tournaments during the year.

Clemson, which returns five starters from its 2007 ACC Championship team, will welcome Syracuse, Charleston Southern and Florida International to town for the Big Orange Bash from Aug. 29-30. The Tigers will face Syracuse in the season opener, just their second meeting all-time against the Orangemen, while taking on the Buccaneers and Golden Panthers on Saturday.

Clemson will then travel to Cedar Falls, IA over the Sept. 5-6 weekend for the University of Northern Iowa Invitational. The Tigers will match-up against Marquette on Friday night for the first meeting in history between the two schools. They will then take on Northern Illinois and the host Panthers on Saturday.

The team will then remain instate the following weekend (Sept. 12-13) for a tournament at the University of South Carolina in Columbia. The two-day event will be for bragging rights in the state as Winthrop and the College of Charleston join the Gamecocks and Tigers in the four-team field.

Clemson will then play host the University of New Orleans and Florida A&M for the Clemson Classic from Sept. 18-20. The Tigers will kick off the tournament, as well as their ACC schedule, against Georgia Tech on Thursday night, beginning their defense of the ACC title. The match between Clemson and New Orleans on Sept. 19 will be the first between the two school since 1987. The Rattlers will be making their second straight trip to Clemson, SC as Florida A&M competed in the 2007 Big Orange Bash.

The 2008 ACC season will then be fully underway the next weekend, as the Tigers travel to Virginia Tech and Virginia on Sept. 26-27. They will return to Jervey Gym the following weekend for a four-match homestead against Miami, Florida State, Wake Forest and Duke. Clemson will be on the road for the Oct. 17-19 and 24-25 weekends to wrap up the first half of the conference slate against Boston College, Maryland, North Carolina and NC State, respectively.

The Tigers will then play host to Virginia and Virginia Tech on Oct. 31 and Nov. 1, respectively before two straight weekends of road matches. Clemson will return to Jervey Gym on Nov. 21 to face Maryland and will conclude the home schedule against Boston College on Nov. 22. The Tigers will then take on the Yellow Jackets in Atlanta on Nov. 28 in the regular season finale.

In 2007, Clemson posted a 29-4 overall record with a 21-1 ledger against ACC opponents. Two-time AVCA Honorable Mention All-American Danielle Hepburn will look to lead the Tigers back to the NCAA Tournament as she begins her fourth year as a starter. Fellow senior and former ACC Freshman-of-the-Year Jeannette Abbott also returns in the starting line-up for Hoover, while starters Didem Ege, Lia Proctor are entering their junior campaigns.