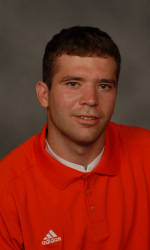 As a freshman, Galloway finished the season with a 19-16 record in singles and was 14-12 in dual matches. He played mostly at number six singles and had a 10-6 mark at this flight. He teamed with Gera Boryachinskiy and the duo finished with a 16-11 record overall.

To be eligible for consideration, a student-athlete must have earned a 3.00 grade point average for the previous semester and maintained a 3.00 cumulative average during his academic career. This year’s team included seven repeat honorees from 2007 and one three-time honoree in Duke’s Kiril Dimitrov.