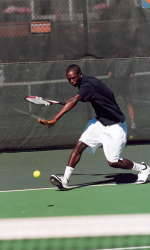 CHAPEL HILL, NC–Jarmaine Jenkins and Paul Koenke both advanced to the second round of the ITA Mideast Region Indoor Men’s Tennis Championship in Chapel Hill, NC on the weekend of October 20-22.

After getting a first round bye, Jenkins lost to Aaron Carpenter of Duke 2-6, 6-4, 6-2. In the first round, Koenke defeated Flaviu Simihaian of Davidson 6-4, 6-4. Damien Lacombe of Virginia Commonwealth defeated Koenke 7-6, 6-4.