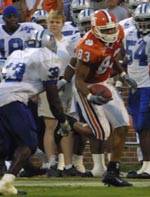 The Atlantic Coast Conference announced the Weaver-James-Corrigan Postgraduate Scholarship winners for 2004 on Wednesday. Clemson student-athetes Tony Elliott, Allison Mitchell and Kanetra Queen will receive the scholarship award for their performances in the classroom and in their respective sports, as well as for their involvement in the community.

Elliott, a wide receiver of the football team, was a first-team Academic All-ACC selection and was named to the first-team Academic All-District in 2003. He was also named to the ACC Academic Honor Roll each of the last two years. The former walk-on started four games this past season, including the last three, and played in all four bowl games of his career. He earned his undergraduate degree in industrial engineering in May of 2003 with a 3.55 GPA and earned a 3.75 GPA in his first semester in graduate school as a language and international trade student. He was named one of the three captains of Clemson’s 2003 football team at the end of the season. He was the top votegetter in the selection process.

As a guard on the women’s basketball team, Queen was named to the Academic All-ACC teams for the 2001-02 and 2002-03 seasons and has served as Clemson’s representative on the ACC’s student-athlete advisory committee. The Fayetteville, NC native set two career highs in 2002-03 and tied two others. She is the first women’s basketball player from Clemson to win this scholarship. The communications studies student will earn her degree in May.

Mitchell was a National Soccer Coaches Association of America Academic All-American in 2002, a member of the All-ACC Tournament team in 2002 and a second-team All-ACC selection on the field in 2003. She started all 20 games in 2003 and has started 83 of 86 games over her career. The midfielder from Signal Mountain, TN finished her Clemson career with five goals and 11 assists. She scored three game-winning goals during her time as a Tiger. She will graduate this May with a degree in aquaculture fisheries.

Each recipient will receive $5,000 to use towards their graduate education. A total of 27 student-athletes from ACC member institutions received this award.