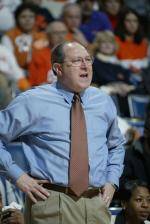 Those are qualities Jim Davis will be looking for from his Lady Tiger basketball team, as Clemson attempts to rebound from its first losing season in 16 years. As Clemson begins the 2003-04 season, Davis will have a deep pool of experienced players to build his team around. Clemson returns four starters and nine letter winners from a year ago. However, gone from last year’s team is Chrissy Floyd, a four-year All-ACC performer who last year was honored as a member of the ACC’s 50th Anniversary Team. She joined golfer D.J. Trahan as the only active Clemson athletes in any sport to be named to an ACC 50-Year anniversary team.

The Lady Tigers are striving to improve on last year’s 14-15 record overall and 5-11 mark in the ACC. It was the first year in the Jim Davis Era (since 1987-88) that Clemson failed to reach postseason play.

“Our ongoing theme this year is going to ‘be a drive for improvement’,” said Davis, who is Clemson’s all-time leader in women’s basketball coaching victories. “We had a lot of obstacles last year and simply didn’t get it done, for whatever reason. We have to show vast improvement in rebounding. That is the area that really jumps out at you.

“Losing 17 points a game from Chrissy Floyd, we must have people step up and give us scoring punch. I think another concern is consistency. We have to be a consistent basketball team.

“We played a lot of freshmen many minutes last year and hopefully improvement will be evident because of the experience. We must become more consistent in every phase of the game to be successful in this league. We have to shoot the ball better. We didn’t take care of the basketball like we usually do; we want to lead the league in turnover margin. I also think chemistry will be a key to this team.

“We don’t have high school All-Americans; we have to be a team to succeed. It is going to be interesting to see how our team bounces back from a season that we didn’t meet Clemson’s expectations. This season will depend on what the players have in their heart and their level of desire and determination.

Here are some comments from Davis on the key areas for the 2003-04 Lady Tigers:

Rebounding-“We have got to be focused in rebounding. This phase of the game is our primary concern, not only in the post, but in every position. I think, at least in my eyes, you have to win the rebounding battle to win the war. We were not very good at rebounding last year, and we must get better. The potential is there. There is on doubt that we must be much improved in this area, and we have a goal of leading the ACC in rebounding. We must focus on rebounding and this is one goal we must obtain to be a better basketball team.”

Defense-“Clemson defense has been a staple over the years and we expect this to continue. We play the game 94 feet, every tick of the clock. If opponents get a basket, they have to earn it. Defense is very important in our system. This is our emphasis. We hang our hat on defense, we have every year since I have been here, and I don’t expect it to be any different.”

Shooting-“We’ve got the best shooters that we have had in quite some time. We also have the ability to be consistent in this area of the game. Our players have worked hard in the weight room and the strength and power will help in shooting and creating better shots. Certainly, a weakness last year was scoring from the point, and we must improve in this area and be a threat from the point. Each year, one of our goals is to lead the league in free throw shooting and we have some good free throw shooters on the team. We also feel we will be able to get more baskets in transition than what we did last year. “

Inside Game–“I think a key to success this season will be the continued improvement of our inside game. We have the skill and talent to be much improved in the inside. We have questionmarks on our team and hopefully, these questionmarks will turn into surprises. The perimeter game also will have a void to fill with the loss of Chrissy Floyd, but I think through hard work we can combat the concerns we have in the backcourt. “

“I hate to use the word potential because it means you haven’t arrived yet. At this time I think potential will turn into surprises. A year of maturation and the experience we gained last year has to be a plus for us. We will miss Chrissy Floyd and our fans and team relied on her to heavily. Everyone on our team needs to step up and show improvement. I may be mistaken, but if this team doesn’t raise some eyebrows in terms of their accomplishments, I will be very surprised. They have worked too hard on their games and in the weight room.”

The Lady Tigers will open the season with a home game against South Carolina on November 21 and then will travel to Alaska for the Great Alaska Shootout. The early season schedule also includes home games against Rutgers, Western Kentucky and East Tennessee State, and road games against Western Carolina, Furman, Youngstown State and Pittsburgh.

Front Court Clemson returns two starters to the frontcourt this season as Maggie Slosser (6-2, SR), and Amanda White (6-4, SO) are back. Slosser averaged 5.5 ppg. and 3.4 rpg. last season. She started 14 games and averaged 14.7 minutes per contest. She was a stellar shooter as she hit 53% of her field goals, best on the team.

“Maggie Slosser is undersized, but has a big heart. She worked so very hard in skill development. Maggie is our leader in the paint. She defends very well, and will take the charge. She does the little things and does what it takes to be successful. She is a good passer outside her post position.”

Amanda White started 28 games at center last season and was the team’s fourth leading scorer with a 7.0 average. She also was the team’s leading rebounder with a 6.1 mark. She is the first freshman to start since the 1993-94 season for a Coach Davis team.

“Amanda had a great rookie year. She has the skills, determination, and the savvy to become a premier player in this league. She is not flashy, but she is very fundamental. White is a player who runs the floor well. She has a great shooting touch and has a great understanding of the game. We are very excited, and she worked hard in the off season. She is Ms. Dependable.

Khaili Sanders (6-3, SO) played in all 29 games last season after red-shirting her freshman year with a knee injury. She was the team’s fifth leading scorer with a 5.8 average and she also pulled in 3.8 rebounds per outing.

“Khaili Sanders is a very talented young lady with outstanding athleticism.. She is probably the best shooter on the team. She has worked hard on her upper body strength and this will pay dividends.

Lacey Shafer (6-5, JR) played in 15 games last season. She averaged 1.3 points and 0.6 rebounds off the bench last year. She has the capabilities to score on the inside, as she did as a freshman when she had 15 points against a nationally ranked North Carolina team. “Lacey needs to become more physical She has a good shooting touch. She needs to become more determined and tougher to become a good player in this league.

Also returning is Lauren Allen (6-2, SO). She saw limited action as a freshman and averaged five minutes per game. “Lauren learned some valuable lessons as a freshmen. The speed of the college game was a shock to her. She has adjusted and elevated her level of play, and we expect her to see considerably more time this season. She can score and can knock down the 15-16 foot shot. She will play the small or power forward position.”

Queen is an experienced point guard for the Lady Tigers. She started 26 games and averaged 25.4 minutes per contest in 2002-03. She averaged 3.3 points per game and 2.6 rebounds to go with a team best 97 assists. She led the squad with a 1.59 assist/turnover ratio.

“Kanetra is returning for her senior year at point guard, and she does a great job as a floor leader. She does a tremendous job when it comes to ball pressure, very important in our defensive scheme. She had a positive turnover/assist ratio and that is important if we are to be a team that does not beat ourselves. Her leadership is important for us to be successful.”

Last season, Julie Talley (5-6, SO) was a dependable reserve at the point guard position. She played in 26 games and had 29 assists. She also averaged 3.7 points per game and at times showed an ability to hit the three-point shot consistently.

“At times last year, Julie was the best point guard we had, and at times she played like a freshman. She is a very skilled player as a point guard. She can shoot the three, beat you off the dribble, and is an excellent passer. Her improvement must come in reading the defense and leadership. She has the toughness and the proper mental approach when it comes to running an offense. If she shows improvement in those areas, she could become something special.”

Julie Aderhold (5-11, SR) is one of Clemson’s best three-point shooters in history. Last year, she was Clemson’s third leading scorer with an 8.0 average. She missed the first part of the season with an irregular heartbeat, but returned to finish the season in fine fashion. She hit 26-69 from the three-point line for a 38% figure, best on the team.

“After missing a third of the season, she too was a Ms. Dependable on our basketball team. She does everything well. Julie sometimes is too unselfish and passes up too many good looks. She needs to score more and help pick up the slack of not having Chrissy Floyd on the floor.”

Another talented returnee is Lakeia Stokes, (6-0, JR). Stokes is the Lady Tigers’ leading returning scorer with an 8.3 scoring average. She also was the team’s second leading rebounder with a 4.6 mark.

“Lakeia will play all three-perimeter positions. She is probably the best athlete on the team. We will look at her first at the small forward position. She shows flashes of brilliance. The key for Lakeia will be to maintain a level of consistency. I expect a break out year for Lakeia.”

“Lauren red-shirted last year because of her knee injury. We nicknamed her ‘the gun’ because of her quick release and her uncanny ability to pull the trigger. She has good shooting range and is a good athlete. She has the knack of getting the shot off so quickly when closely guarded. We have hopes she may be a surprise on this basketball team.

“Maxienne White has all of the tools to be successful at the Division I level. She has a great basketball body and is a tremendous athlete. She can shoot the three, take the ball to the rack, is a very intense young lady on the basketball court. Great things are in store for the Lady Tigers when she is on the floor.

“At 6-0, Carrie Whitehurst is a one of the best shooters on our basketball team. Her size enables her to take smaller players inside for mismatches, and yet she is an outstanding three-point shooter.” Whitehurst is the sister of Clemson’s starting quarterback, Charlie Whitehurst.

“Jill Justice is very similar to Julie Aderhold. She too does everything pretty well. She has great range and shooting the ball is an exceptional passer and has a great understanding of the game. Her father was her high school coach. She has lived and breathed basketball since she was very young.”