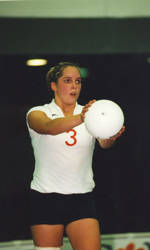 As the Clemson volleyball team enters the 2002 season, the team’s strength will lie in its experience and versatility. The future looks bright for the Tigers with 10 returning veterans and four returning starters who not only have seen court time, but can also play a number of positions.

Entering her 10th year as Clemson’s head coach, Jolene Jordan Hoover is very enthusiastic and optimistic about the season. “We have been in a situation the last two years that we have been very young. We are really looking forward to the majority of our team being sophomores and juniors,” said Hoover. “Despite our continued youth, we have a number of players with court time going into this season, which is exciting. Not only do we have court time, but we are much stronger because of our versatility.”

The Tigers graduated four seniors from last year’s team, right side hitter Jodi Steffes, middle hitter Anne Berki, outside hitter Meredith Kirtland and defensive specialist Tami BySura. Steffes completed her Tiger career as a four-time AVCA Division I All-East Region selection, a program first, and a three-time All-ACC selection. The Illinois native completed her senior season as the Tigers’ team leader in kills, kills per game, hitting percentage and digs. The right side hitter finished fourth among Clemson career leaders in defensive saves per game with a 2.94 digs per game average, and is third in total digs with 1,286. Steffes is fifth on the all-time kills list with 1,389, and is sixth on the all-time kills per game list (3.17).

Berki finished her career with 230 kills and 135 blocks, while outside hitter Kirtland ended her four years at Clemson with 433 kills and 518 digs. Defensive specialist BySura completed her Tiger career with 349 digs and a 1.52 digs per game average.

Clemson returns its lone senior in Jessi Betcher, the Tigers’ all-time leader in assists per game with an 11.85 average. Betcher, a three-year starter at the setter position, ranks second all-time on Clemson’s career list with 3,756 assists. The native of Boulder, CO was the ACC Rookie of the Year in 1999 and also was selected as the AVCA District III Freshman of the Year.

Hoover will look to Betcher to lead the Tigers on the court along with red-shirt sophomore Ryane Beasley. Each spring the team casts votes on their choice for the next season’s captains. Betcher was chosen for the third consecutive year, while Beasley begins her sophomore season as a first-year captain.

“Jessi is definitely someone you notice, someone with a lot of energy. She is encouraging and very vocal on the court,” says Hoover. “Ryane has a huge heart and she brings different qualities to the team. She is a genuine and competitive person with a very calm demeanor. It speaks volumes as to what the team feels about Ryane in choosing her as a co-captain because she is just going into her sophomore year.”

Junior Marija Zoric and sophomore Lori Ashton will be the mainstays in the middle position. Beasley could also see some time in the middle as well. Ashton, from Waldorf, MD, was a member of the ACC All-Freshman team, played in 103 games as a rookie, and led the team in block solos, block assists, blocks per game and total blocks. She has already broken into the Clemson record books, as she is fifth all-time in blocks per game and 10th in hitting percentage. Hoover commented, “Lori is a fantastic athlete who is very explosive and a very smart player. She is touching 10’4.5″ as a sophomore, and we are ecstatic because we have her for three more seasons.”

Zoric, from Belgrade, Yugoslavia, is one of the most improved players on the team. She tallied 69 kills and 62 blocks during the 2001 season. Against South Carolina, Zoric recorded nine blocks and had a season-high three block solos at NC State.

“Marija was our most improved player last spring,” said Hoover. “She has a fantastic work ethic and is developing into one of the top middle blockers in the ACC.”

Beasley will not only be one of the leaders of the team as a co-captain, but she is also expected to be the leader of the outside hitters. She is the team’s most versatile player, playing outside, middle, or right. The red-shirt sophomore from Channahon, IL, was second on the team in kills and kills per game last season. She tallied 313 kills with a 3.19 kills per game average, and she also recorded 244 digs on the season.

Finn and Dallao also will see action at the outside hitter position. Finn, a sophomore from California, played in 79 matches last season recording 236 kills and 159 digs. The outside hitter ranked third on the team in hitting percentage (.248) as a freshman. “During the spring, Leslie did a great job. She is quick, smart and aggressive. She does a fantastic job adjusting to the set and finds a way to score with few errors.”

Dallao, a member of the 2000 ACC All-Freshman Team, is another versatile player who could see time at two positions this season. The junior outside hitter from Arlington, TX, may also be positioned on the right side because of the depth at the outside position. Against Duke last season, Dallao hit .353 with a season high nine kills, and also recorded 10 digs and one block in that match.

Freshmen Hill and Stanton will add to the depth of the outside hitter position and will be vying for playing time as well. Hill, the 2000 and 2002 News-Gazette Player of the Year from White Heath, IL, can also play on the right side as well. Stanton, an all-area pick by the Chicago Daily Herald (2000 and 2001), helped lead the Sports Performance Volleyball Club to a ninth-place national ranking at the USA Volleyball Championships in 2001. Hoover said, “Carly and Meghan are similar in that they are both extremely versatile players. Adding both of them with the returning players will give us greater versatility and depth.”

Rookie Kristin Swanson of Lake Forest, IL, will vie for playing time at the right side position as well. The 6’0″ right side hitter was a two-sport athlete in high school, playing volleyball and competing in track. Most notably, she helped lead the Lake Forest High School volleyball team to the 2001 regional championship.

Betcher returns for the Tigers at the setter position. The senior, who only nees 649 assists to become Clemson’s all-time leader on the career assist list, could also see time at the libero position, when not playing as setter.

The Tigers have four defensive specialists on the roster, including Simpsonville, SC, native Stephanie Haskell. As a rookie, Haskell recorded 133 digs and tallied double-digit digs in four matches. Laura Jensen is another one of Clemson’s versatile players for 2002, as she could see playing time at the outside hitter position or as a defensive specialist. As a freshman, the California native recorded 128 kills and 237 digs.

Lindsey Abbott, a junior from Fort Walton Beach, FL, also will be vying for playing time as a defensive specialist. She played in 15 matches and tallied 32 digs during the 2001 season. Abbott had a season-high nine digs against UNC Wilmington.

“Lindsey had a great spring and is one of our most solid passers,” said Hoover. “She will definitely see court time in the defensive specialist role.”

Sophomore Sarah Gardner, from Waldorf, MD, joined the team last season as a defensive specialist and will be vying for playing time as well this year.

The Tigers have put together a tough schedule for 2002, competing against several nationally renowned programs within the first few weeks of the season. Couple that with two home tournaments and competitive ACC foes, Clemson looks to have a tough and challenging season.

The Tigers’ first home match is on Sept. 4 against Georgia in Jervey Gym. Clemson will then play host to the Big Orange Bash on Sept. 6-7. East Carolina, George Mason and Jacksonville will compete in this year’s tournament. The Tigers will travel to Columbia, SC, to take on the Gamecocks on Sept. 10. Clemson will continue its road trips as the Tigers play in the Texas Tech Tournament on Sept. 13-14 where they will face Texas Tech and Arizona State. On Sept. 20-21, the Tigers will play host to the Clemson Invitational as Texas Christian, Virginia Tech and Coastal Carolina will travel to Clemson.

Hoover is optimistic about opening the season with a competitive schedule. “We open with an extremely difficult tournament at Pepperdine. With the Pepperdine Tournament, our two tournaments and the Texas Tech tournament, we are going to have a tough and challenging preseason that will prepare us for the ACC. The league as a whole lost a number of really good players to graduation. We are definitely in contention for a top spot in the conference. We have a tough schedule that will prepare us for league play as long as we stay focused,” said Hoover.

Clemson will open its 2002 ACC season on the road against Virginia and Maryland on Sept. 27 and 28, respectively. The Tigers will return home for their first ACC match in Jervey Gym on Oct. 1 against North Carolina. Clemson also will play host to Florida State, NC State and Georgia Tech before its next road series where the Tigers will face Wake Forest and Duke. After facing the Demon Deacons and Blue Devils, Clemson returns home on Oct. 25-26 to face Maryland and Virginia before traveling to NC State, North Carolina, Georgia Tech and Florida State. The Tigers will conclude ACC play and wrap up their home matches Nov. 15 and 16 as they play host to Duke and Wake Forest, respectively.

Clemson will compete at the ACC Championships at Georgia Tech on Nov. 21-24. Tiger volleyball has a great following, and Hoover is excited that Clemson will be well-represented in Atlanta since the tournament is so close to home.

Throughout the past year Clemson has been actively involved in community service. The team participated in community service through the Alumni Center and because of their 100% participation they received a check for $250 dollars to donate to a charity of their choice. The Tigers chose to donate the money to the Make-A-Wish Foundation. The team also read books at Clemson Elementary School, and participated in Campus Sweep and the Welcome Back Festival.

During the spring season the Tigers team chemistry became very evident. Hoover feels that the strong bond will reap benefits for the team throughout the season. “This spring we probably made the greatest strides as a team. We showed that we are a team and not little pieces of a team. We will definitely see the benefits of that on the court this season.”

Team chemistry is not the only bond evident on the 2002 team. The coaching staff has a strong relationship not only amongst the staff, but also with the team. “Karen and Kelley do a wonderful job,” said Hoover. “Continuity in the staff is very important for the team. The chemistry within the staff and between the staff and the team is very good and I don’t think we could ask for a better situation.”

Clemson enters this season with the goal of getting back to the upper echelon of the ACC. The Tigers have the potential and capability to finish the season strong and in a top slot in the conference with the presence of 10 versatile letterwinners who have a strong team chemistry, and have seen considerable court time. With a hunger for success, the 2002 Clemson volleyball team’s goals are definitely attainable. “The team hasn’t found a lot of success in our record the past two seasons, but I believe they are ready. They are hungry and are eager to make their presence known in the Atlantic Coast Conference.”