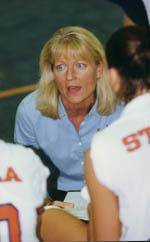 Jolene Jordan Hoover begins her ninth season in Tigertown with the goal of getting the Tigers back to the upper echelon of the ACC. The presence of five returning starters in the lineup gives Hoover an optimistic attitude about the 2001 season.

Not only does the team return many familiar faces, but the 2001 season will feature fresh enthusiasm with five freshmen vying for playing time, two new coaches who bring an expanded knowledge of the game, a new scoring format and a new look to Jervey Gymnasium.

Clemson returns senior Jodi Steffes, a first-team All-Region selection and a member of the first-team All-American Farm Team. Steffes, a three-year starter at middle hitter, led the Tigers in kills (465), kills per game (4.31), hitting percentage (.310), digs (350) and total blocks (77) during the 2000 season. She is tied for ninth on the all-time kills list with 1,037 and is 10th all-time in block assists with 222. Her 3.03 kills per game average places her sixth all-time, and her 2.04 digs per game rank is third-best.

“Our strength will be on the right side with Jodi Steffes and Jessi Betcher,” said Hoover. “Two years ago, Jodi was third on the team in attempts and had the benefit of sharing the offensive load with two Tiger greats, Alison Coday and All-American Cindy Stern. Jodi didn’t lead the team in attempts until last year. This past season she really understood what it meant as far as the team depending on her to lead the offense. Jodi is our stabilizer, our calming force. The result of this past season is that Jodi has a clearer picture of what type of leader she wants to be, and she is ready to handle that role.”

Red-shirt junior Anne Berki and sophomores Marija Zoric and Lindsey Fuller will be vying for the middle positions. Berki finished last season with a .231 hitting percentage and 57 total blocks.

The outside hitter position is another one of the positions with an extreme amount of depth. The Lady Tigers return three lettermen, including Kiki Dallao, a member of the ACC All-Freshman team. Dallao was second on the team in kills with 398 and 3.55 per game.

Clemson also will return senior Meredith Kirtland, who finished her junior season with 293 kills and 316 digs. Laura Jensen, a sophomore from California, will also be competing for a starting position after seeing action in 108 games last season.

Ryane Beasley returns to the court after suffering from two stress fractures in her foot last year. Beasley, Clemson’s second Volleyball Magazine’s “Fab 50” selection, received a medical red-shirt year and has four years of eligibility remaining as a Tiger.

Freshman Leslie Finn, an All-CIF Division I first-team selection in California, will add to the depth of outside hitters and will be vying for playing time as well.

Junior Jessi Betcher returns to lead Clemson’s roster of setters. Betcher will look to continue setting Clemson setting records, as she leads the team as one of the co-captains for the 2001 season. The junior is currently fourth on the all-time career assists list with 2,729 and is first on the career record list in assists per game with 12.93.

“One of the first people you notice when watching our team is Jessi. She is really enthusiastic and has a smile on her face whether we are five up or five down. She is very much an emotional leader and has an extremely strong work ethic, which encourages the team to play for her. She is the glue between the passers and the hitters and directs our offense.”

Freshman Tiger Breezy Ambort will train with Betcher at setter for the 2001 season. Ambort, an All-CIF Division II first-team selection and the San Diego Union-Tribune Female Athlete of the Year, was also heavily recruited in basketball.

“We may be able to do some different things offensively in utilizing the strengths of both Jessi and Breezy. There are some different lineup options that we may experiment with in certain rotations.”

“Tami had a great spring. She made a lot of improvements and is very focused on directing the back court when she is in the match.”

Sophomore Lindsey Abbott joined the team last season as a defensive specialist and will be vying for playing time as well this year.

Freshmen Stephanie Haskell and Sarah Gardner will round out the defensive specialists. Haskell, a two-time Region I-AAAA Player of the year in South Carolina, will be a utility player training at defensive specialist and also at setter. Gardner, younger sister of former Clemson alumni Blythe Gardner, helped lead her high school team to a third-place finish in the state of Maryland.

The Tigers’ schedule looks to be challenging, but will give the ladies the experience needed when post season play arrives. Clemson will face nine teams that were in the NCAA tournament last year, including three ACC teams.

Clemson will open the season August 31-September 2 at the University of Colorado Tournament, where the Tigers will take on NCAA tournament participants Loyola Marymount, Oral Roberts, and Colorado.

After playing host to the Big Orange Bash and traveling to the University of South Florida Tournament, Clemson will open ACC play on September 18 against Wake Forest.

The ACC Championships will take place in Tallahassee, Florida, this year on November 15-18. The Tigers have two new faces on the coaching staff who bring an expanded knowledge of the game and a tremendous amount of experience to Tigertown. Assistant coach Karen Weatherington joins Hoover after coaching at Iowa State and ACC rival Duke. While at Duke, Weatherington recruited some of the nation’s top recruits.

“I am very pleased that Karen has come back to the ACC,” said Hoover. “She brings a wealth of experience to Clemson. Her enthusiasm and personality make her one of the most highly regarded recruiters in the country.”

Kelley McCaffrey, a member of the Wake Forest University volleyball team from 1996-99, joins the Tigers coaching staff after coaching at Davidson College. While at Davidson, McCaffrey helped lead the team to the Southern Conference Championships in 1999 and 2000, as well as a berth in the NCAA tournament.

“Kelley has been a great addition to our staff,” said Hoover. “She is extremely bright and personable. Her ACC playing experience and coaching success at Davidson will benefit the future of our program.”

This season will feature a new scoring format with the matches remaining the best of five format, with the points going to 30 in the first four games and the fifth going to 15. With the rally scoring every ball is worth a point and will help with the time frame of the matches.

“Our sport attracts families with younger children and for them to attend a match at 7:00pm and not leave until 10:00pm is kind of tough,” said Hoover. “From the feedback I have received the new scoring format will be more appealing for the fans and one of the purposes for the change was to try to fit the match into a two-hour time frame.”

Another fresh aspect of the 2001 volleyball season will be the new look to Jervey Gymnasium. The home of the Tiger volleyball team will feature a new sport court with the same color scheme as the former court. Additional seating, including a row for statisticians and media, will be added on the east side of the gymnasium. With the new seating arrangement, more room will also be available on the west side of the court allowing for the team benches to be located on that side. The additional seating will now bring capacity of the facility to approximately 2,000.

The Tigers have the total package this season with three phenomenal coaches and a young squad whose strength lies in experience, which will guide them through a competitive schedule, making a return to the NCAA tournament an attainable goal.